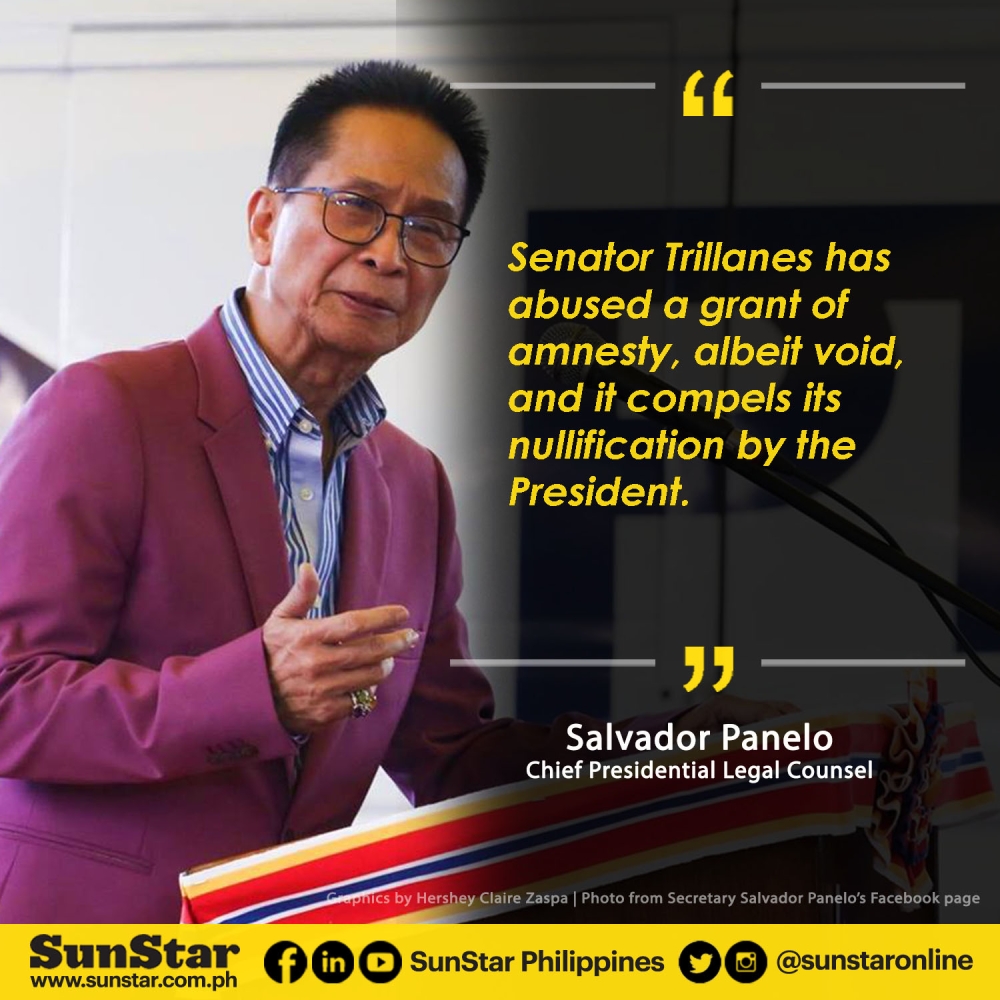 Panelo said Duterte was "constitutionally allowed" to declare the amnesty granted to Trillanes through Proclamation 75 signed during the Aquino administration, as the feisty senator had "abused a grant of amnesty."

"Even assuming that Proclamation No. 75 is valid and is compliant with the pertinent laws, rules and regulations of an executive clemency, the declaration of the grant of amnesty as regards Senator Trillanes as void is constitutionally allowed," Panelo said in a statement.

"Senator Trillanes has abused a grant of amnesty, albeit void, and it compels its nullification by the President - the official authority who is considered by the 1987 Constitution as the grantor of executive clemencies," he added.

Duterte on August 31 signed Proclamation 572, ordering the revocation of Trillanes's amnesty for supposed failure to submit Official Amnesty Application Form and admit his guilt for the crimes he committed during the uprisings against former President and now House Speaker Gloria Macapagal-Arroyo.

Under the proclamation, Duterte also ordered Trillanes's arrest and the filing of criminal and administrative cases against the latter.

Opposition lawmakers came to Trillanes's defense, asserting that the revocation of the amnesty needs Congress's approval.

Panelo, however, argued that the amnesty can be declared void "even without the concurrence of a majority of all the members of the Congress."

Duterte's chief legal counsel said Duterte has the power to issue an order against a "political offender" like Trillanes, given that the senator allegedly committed acts that are detrimental to the state.

"The State cannot be shackled by an act of clemency it has given to a political offender when the latter pursues subsequent acts inimical to its interest and violative of its fundamental charter. The State, acting through the President, has the inherent right to protect itself from assault coming from whatever source," Panelo said.

"As Chief Executive and Head of Government, he has the power to issue orders protective of the State and its people. This is in line with the prime duty of the government to serve and protect the people under Article II, Section 4 of the 1987 Constitution," he added. (SunStar Philippines)