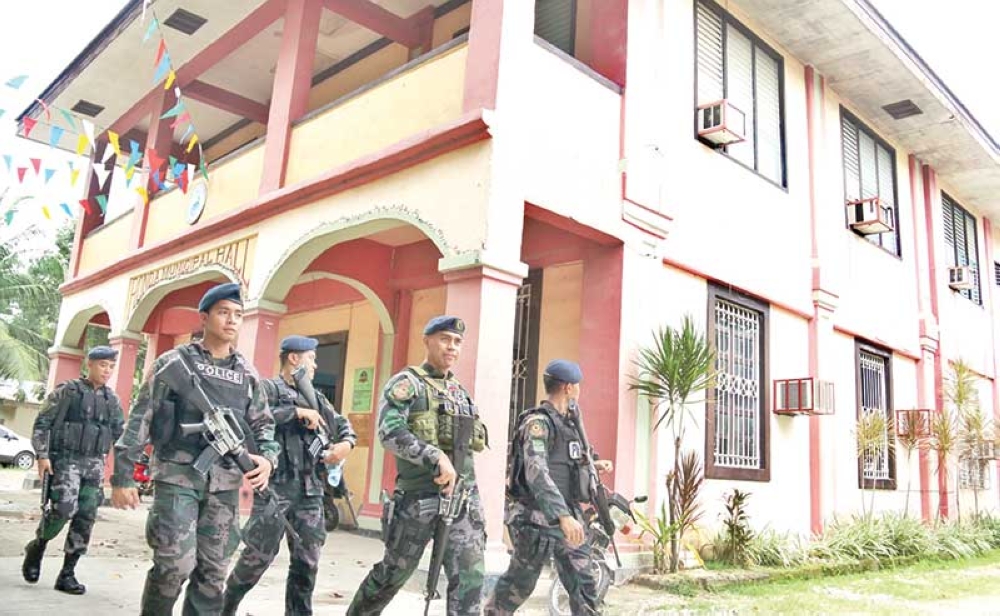 The police are clueless on the identities of the killers of Blanco, 59. In the case of Ungab, lawyer of self-confessed drug lord Kerwin Espinosa, police claimed that they had identified the killers, but no one was charged and they even told reporters that the gunman had been killed in an anti-criminality operation.

The Ronda municipal hall has no closed-circuit television (CCTV) cameras, although the Municipal Council has passed an ordinance allowing the purchase of CCTV cameras.

Blanco and Ungab had been tagged by authorities as drug personalities. Both denied the allegations.

In 2017, Blanco’s supervising power over Ronda Police Station was stripped by the National Police Commission after he was included in the narco-list of President Rodrigo Duterte. His two police escorts were recalled.

He said they are eyeing politics and personal grudges as the possible motives behind the attack, but added that they are not discounting the possibility that the attack was drug-related.

He said Blanco did not report any threat, but the mayor reportedly sensed suspicious-looking individuals lingering in the vicinity of the Municipal Hall in the past weeks.

Vice Mayor Rocky Gabatan, the first councilor who replaced Ungab, said the murder of Blanco casts a gloomy mood over the fiesta week of the town’s patron, Our Lady of Sorrows.

Gabatan is expected to be appointed as mayor, while Municipal Councilor Harold James Lledo will become the vice mayor.

Gabatan said he and the councilors decided to cancel the fiesta’s opening salvo Wednesday night. The simple torch parade was done instead.

Gabatan and the municipal officials and employees wrapped their left arms Wednesday with black ribbons as expression of grief. The flag outside Municipal Hall was also flown at half mast.

Gabatan led the Municipal Council in an emergency session at 1:30 p.m. Wednesday to file a resolution for a speedy investigation and condemnation of the murder.

They planned to ask the National Bureau of Investigation-Central Visayas to conduct a parallel investigation.

Police Regional Office-Central Visayas Director Debold Sinas ordered the formation of the SITG, which is headed by Abrugena and composed of investigators from the CPPO, Ronda Police Station, Criminal Investigation and Detection Group-Central Visayas, intelligence units and the legal service.

Gabatan said he was disappointed that the incident happened near the police station.

He said Blanco had been sleeping in the mayor’s office before Duterte was elected President. Blanco entered politics in the 1990s as a town councilor. He was elected for his third and last term as mayor in 2016.

The gunmen went inside the mayor’s office through the back door near the Sangguniang Bayan building. The back door is about 10 meters from the police station.

Before it happened, there were 12 police officers who were on night shift duty. At 12:14 a.m. Wednesday, five police officers went to Barangay Vive to implement warrants of arrest for suspected criminals. Two personnel were left in the police station, while five others were on patrol.

The child and watchmen, who failed to see the faces of the assailants, later heard a burst of gunfire coming from the mayor’s office. Blanco’s partner was reportedly in a bedroom adjacent to the office. She was spared.

After the armed men left, the watchmen went up to Blanco’s office through the back stairs. When they saw the door opened, they ran to the police station.

The police station's desk officer then called the team that was supposed to implement the arrest warrants. After the team members arrived, they went to Blanco's office and found the mayor bloodied on a wooden bench. The television was still on.

Blanco was rushed to Barili District Hospital, where he was declared dead at 2:25 a.m. He succumbed to multiple gunshot wounds in the body.

Empty shells of M16 and slugs were recovered from the office.

The police conducted a hot pursuit operation but they failed to capture the assailants on board the van that sped off to Dumanjug.

Ronda Police Chief Jay-R Soto Palcon said only two police officers were left at the police station. The two officers heard a noise from the mayor's office but they could not ascertain what it was, as it happened during a downpour.

Palcon said they are willing to face investigation to erase doubts that the police were behind the killing.

Last May 13, Daanbantayan Mayor Vicente Loot and his family were attacked by gunmen on board a white van in a port in Barangay Maya. The attackers were reportedly Tagalog-speaking.

Loot and his family were unharmed. But three of his employees and a porter were wounded. (KAL)