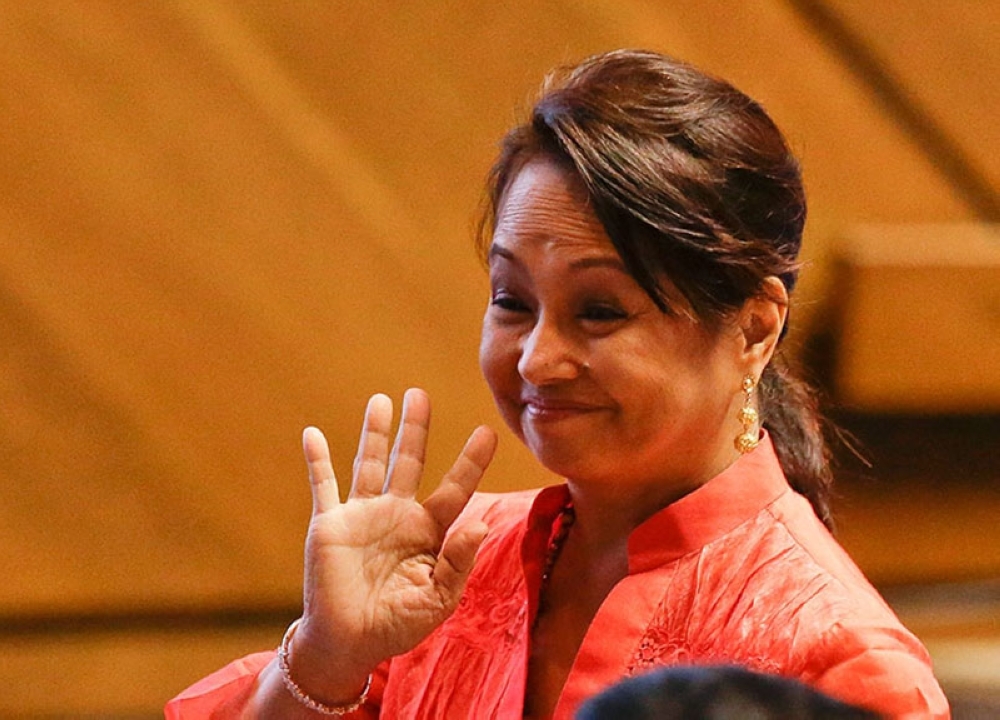 MANILA. Former President Gloria Macapagal-Arroyo waves in this photo taken on July 23, 2018, when majority of the members of the House of Representatives installed her as their new Speaker. (File Photo)

ACCORDING to the recent Pulse Asia survey, House Speaker Gloria Macapagal-Arroyo is the least trusted among the top five highest government officials in the country.

Of the 1,800 respondents who participated in the survey conducted from September 1 to 7, only 19 percent says that they trust Arroyo. Four out of 10 respondents, or 43 percent, stated otherwise.

According to Akbayan Representative Tom Villarin, Arroyo’s trust ratings show that people still have not forgotten the “misdeeds and the malgovernance brought by her illegitimate presidency.”

“Her ascension to power via a leadership coup in the House was never lost from the people’s consciousness of her past leadership,” he said.

(We cannot avoid it. She could not shed her reputation when she was still the president.)

Arroyo was arrested in 2011 for electoral fraud in connection with the 2007 elections.

She was allowed to post bail in 2012 but before she was released, the Sandiganbayan ordered her arrest on charges of plunder over the alleged PCSO (Philippine Chairity Sweepstakes Office) fund mess.

She was elected as Speaker of the House of Representatives, replacing House Speaker Pantaleon Alvarez on the same day of President Rodrigo Duterte’s State of the Nation Address on July 23.

The approval ratings of the House of Representatives under the leadership of Arroyo has dropped by 10 points to 55 percent in the latest survey from 65 in June survey.

Even with the low approval of 19 percent and a high distrust of 43 percent, Arroyo noted that there is an upswing in her approval rating.

“After years of attacks and political persecution, the public approval rating of former President and now House Speaker Gloria Macapagal Arroyo is on an upswing with the level of distrust diminishing,” the Office of the Speaker said in a statement.

After she left the presidency in June 2010, her approval rose to 19 percent with 43 percent distrust.

“While Speaker Arroyo has always been dispassionate about surveys, she takes them as a snapchat of people’s sentiment. When she was president, she would not let surveys define her work,” Arroyo's office said.

“As Speaker, however, she remains focused and committed to what needs to done at the House of Representatives to carry out the legislative agenda of President Duterte,” the statement added.

Andaya noted that more than approval ratings, "there are more important numbers in the dashboard of social and economic indicators which we must focus on like trade numbers, deficit, consumer price index, job figures, farm output and many more." (SunStar Philippines)