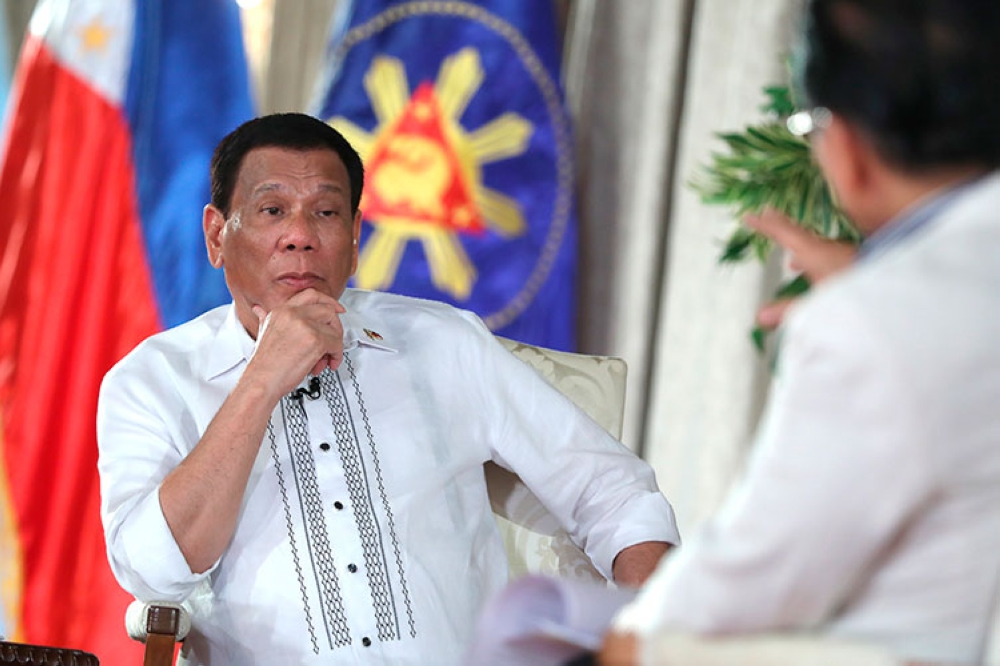 MANILA. In this photo released by the Malacanang Presidential Photographers Division, President Rodrigo Duterte (left) listens to a question from Chief Presidential legal counsel Salvador Panelo during a state TV talk show at the Malacanan Palace in Manila on September 11, 2018. (AP)

PRESIDENT Rodrigo Duterte's approval rating suffered a 13-point drop from 88 percent in June to 75 percent in September, while his trust ratings went down from 87 to 72 percent, according to the Pulse Asia survey release Tuesday, September 25.

Opposition lawmakers at the House of Representatives said the drop in the ratings is not surprising but expected due to the rising prices of basic commodities in the country.

Zarate believes that Duterte’s ratings will continue to fall with the Tax reform law, peso depreciation and anti-former policies that will lead to the increase of the prices of basic commodities.

"President Duterte is ultimately responsible for further impoverishing the poor majority of Filipinos and undermining the local economy by submitting to his erring economic managers. A reversal of failed economic policies and direction is in order," Zarate said.

He said Duterte should sack his economic managers, procure palay at P22 a kilo, and scrap Train law.

Akbayan Representative Tom Villarin, for his part, said: “President Duterte’s 15-point drop in trust ratings shows that people are tired of his showmanship as seen by the economic woes due to high prices and corruption in government. The populist appeal has withered as people suffer from inflation and economic uncertainty.”

But Malacañang said Duterte remains to be the national official with the highest approval and trust ratings.

“I believe that’s still a very good approval rating. Certainly still the highest of all the officials surveyed by Pulse Asia,” Presidential Spokesperson Harry Roque said in a Palace briefing.

House of Representatives Speaker Gloria Macapagal-Arroyo scored a 19 percent trust rating. The survey did not show she received an approval rating.

Roque said Malacañang is “not affected” by lower survey ratings, noting that the President is more focused on doing his job.

“The President rules because it is his constitutional duty. He doesn’t rule for survey results. Maraming beses na po niya sinabi ‘yan (He has said that several times),” he said.

“We take note of the survey results but we are not affected by it because ang Presidente naman (the President) will do his best to discharge his duties as President and Commander-in-Chief,” he added.

“Why do I say these things about Jason? Parang 'yung single issue ng bigas, nakalimutan na ng tao 'yung ibang achievements sa administrasyon dahil malapit nga ito sa sikmura (Because of the single issue of rice, people have forgotten the other achievements of the administration because this is an issue close to the stomach),” he said.

Roque, who said he was personally angered by this development, said Aquino could have prevented problems involving the country’s rice supply if the agency had assured that there was enough buffer stock.

“So hindi natin maiiwasan yung pagtaas ng presyo ng krudo pero itong nangyari sa bigas dapat naiwasan ‘to kung sapat ang ating stock (We can’t prevent the rise in oil prices but what happened to the country’s rice supply could have been avoided had they assured we had enough stock),” he said.

Roque, however, assured that the government is exerting efforts to reduce the prices of rice and other food products amid rising inflation rates.

On September 11, Duterte bared that Aquino wanted to be relieved from his post since he could no longer cope with the demands within the food agency. The President is currently looking for Aquino’s replacement.

Roque said he will look into the possibility of filing technical malversation and graft cases against Aquino for contributing to the problem of inflation and high prices of rice.

“I have not accused him of actual financial graft because I do not know. However, I promise to look into it soon,” he said.

The Pulse Asia survey was conducted September 1 to 7. In the same week, the government announced the record-high 6.4 percent August inflation and released the proclamation that revoked Senator Antonio Trillanes IV’s amnesty. (With PNA/SunStar Philippines)