Myanmar in my mind 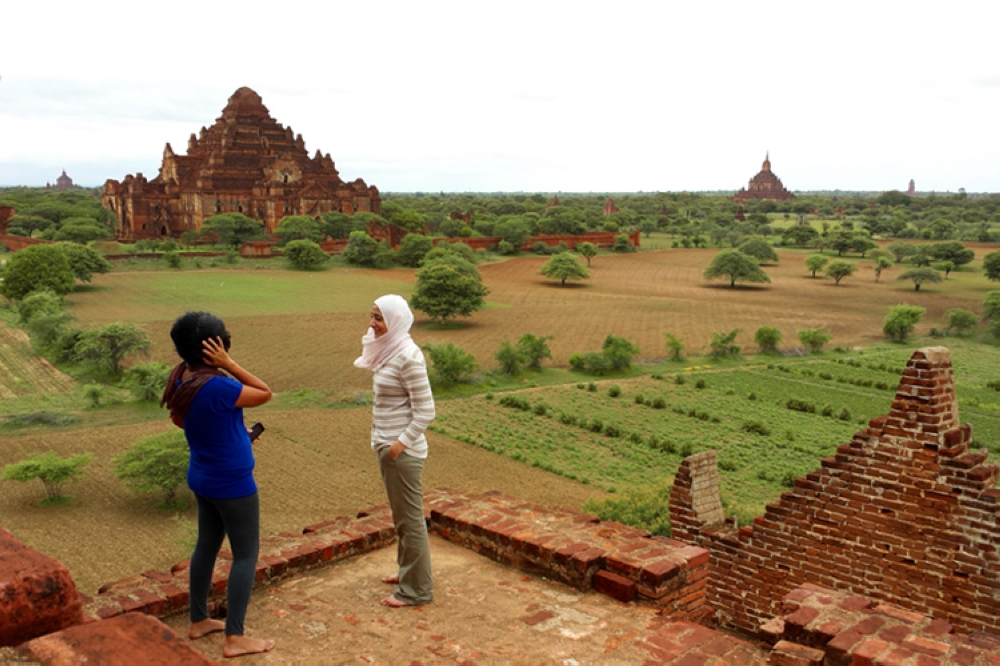 From a distance. On the deck of the Shwesandaw Pagoda with a magnificent view of the unfinished 12th-century Dhamma-yangyi Temple, a massive structure with a dark past. Further in the background is another 12th century Buddhist structure, the Sulawani Temple. (Photo / Noel S. Villaflor) 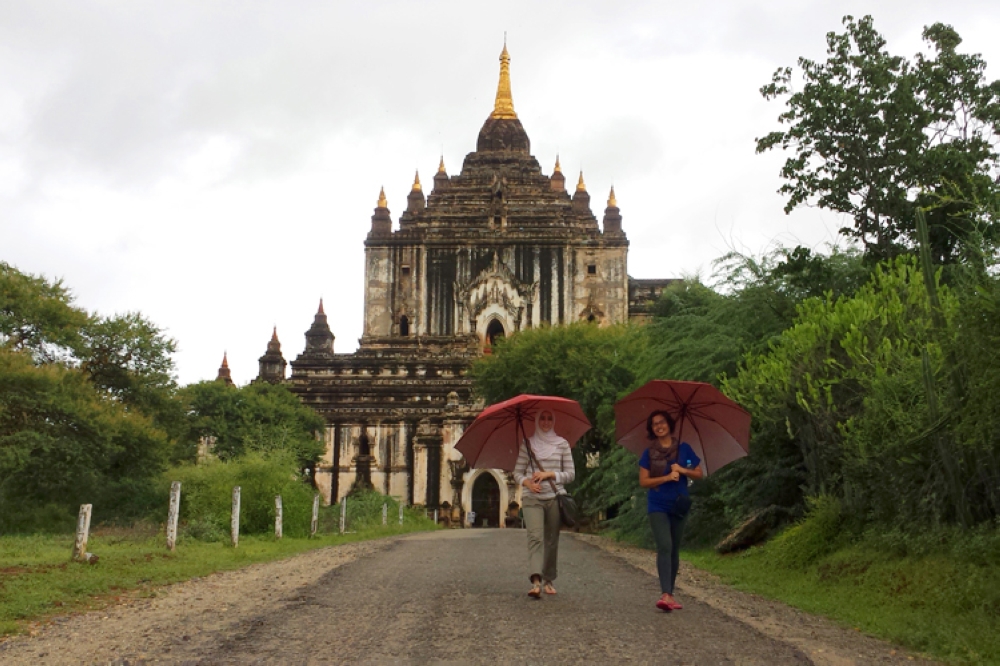 In the rain. With their red umbrellas, Bretha and “Aya” walk in a drizzle under Bagan’s gray skies. Behind is the 12th century Thatbyinnyu Temple. (Photo / Noel S. Villaflor) 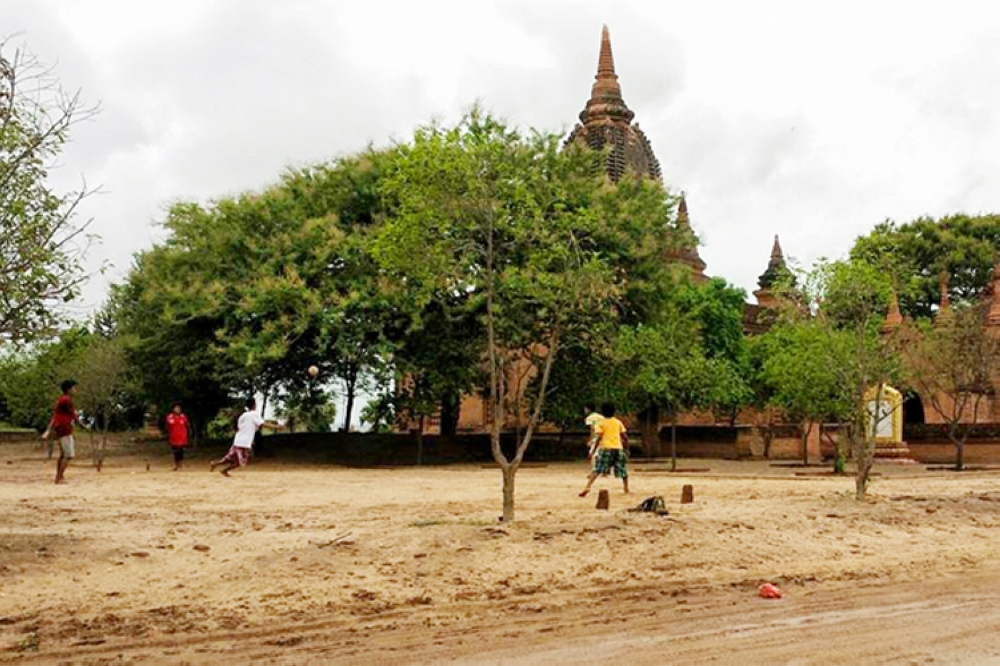 While away the time. Kids play football, Myanmar’s favorite pastime, at an empty lot near a shrine. (Photo / Noel S. Villaflor) 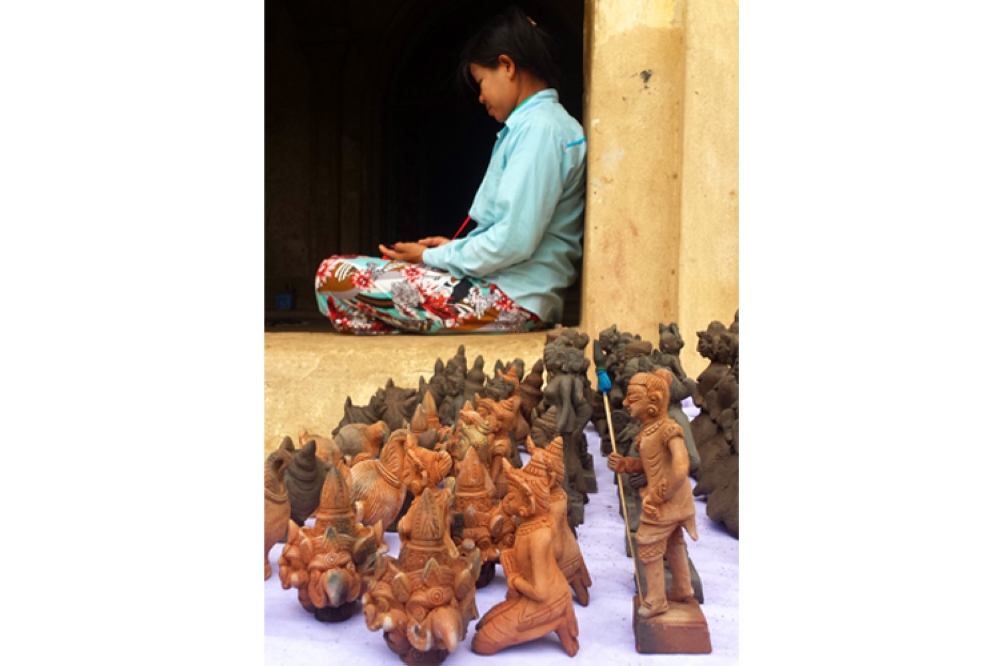 Solitude. A Bagan woman with souvenir sculptures at one of the Buddhist temples. (Photo / Noel S. Villaflor) 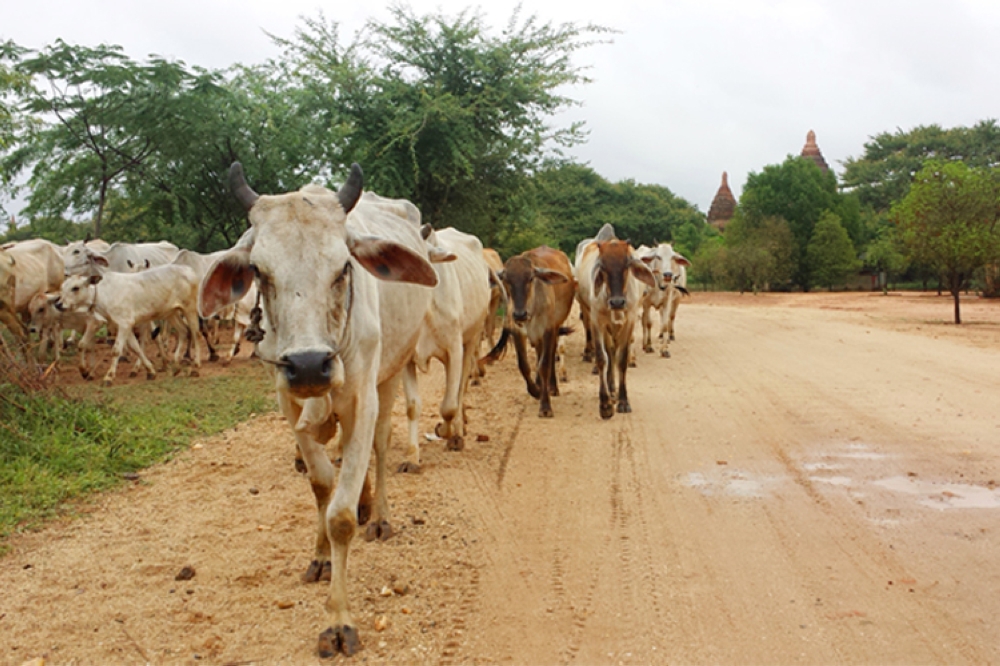 Walk. A herd of cows in the plains of Old Bagan. (Photo / Noel S. Villaflor) 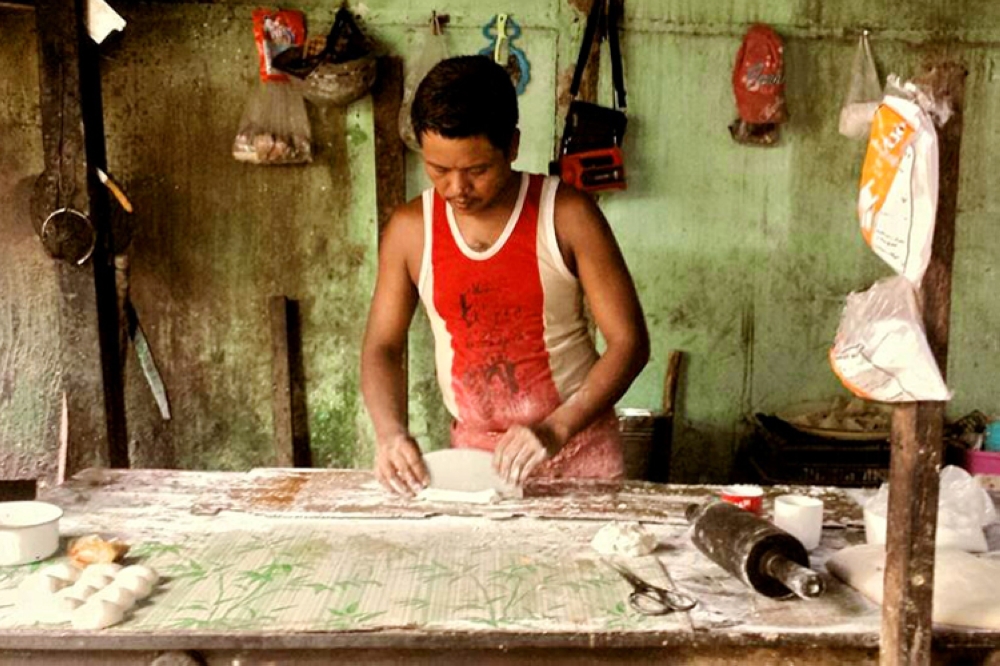 Hand Work. A baker kneads bread at his stall at the Nyaung U public market. (Photo / Noel S. Villaflor) 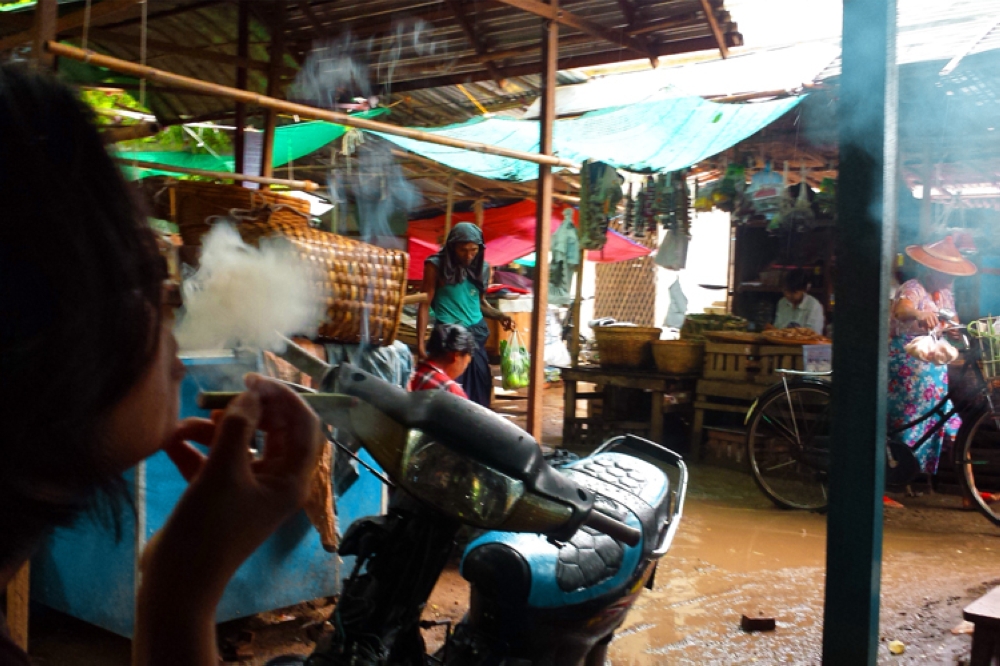 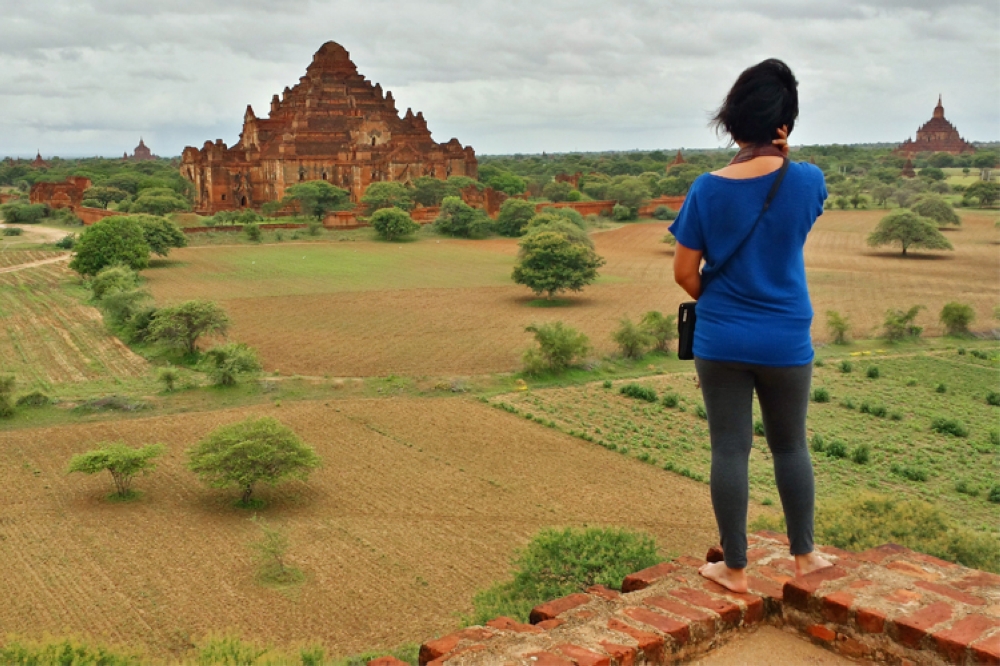 STILL lightheaded from the astonishing beauty of Old Bagan, Bretha, our newfound Egyptian friend Aya, and I headed to the nearby town of Nyaung U for afternoon snacks. Bretha asked the van driver where he and his fellow drivers usually eat, not some place where they would take tourists. He obliged and dropped us at a roadside eatery.

Over mohinga noodles, the three of us wondered why Buddhist temples of all shapes and sizes were scattered across 104 square kilometers of green plains in Bagan, mirroring the stars overhead. It is said that at the height of the Pagan Kingdom in the 13th century, more than 10,000 sacred structures were built, but only 2,000 remained to this day, surviving harsh weather and natural calamities like the 6.8 magnitude earthquake that struck in August of 2016 (a year after this trip).

Still, seeing a handful of the surviving temples was a humbling experience, knowing that these monuments for the gods, marvels of architecture and engineering, had been here for so long and for certain will outlast us along with the fleeting technology of our kind.

Having emptied our noodle bowls, we considered going to the public market, where local goods such as the magical kwun-ya, the yellowish cosmetic paste called thanaka, rolled tobacco, and mystery meat were traded.

Aya, in her delicate hijab, listened intently as Bretha described our trip to the market earlier that morning before we checked in at the hotel. There was much to see and do at the market. We decided to go there the next day as it was getting late in the afternoon. As we stepped out of the eatery, Aya told Bretha within earshot: “It’s my first time to eat street food. Thank you.”

The next morning, we did more temple hunting under Bagan’s gray, cloudy skies. The plan was to ride bicycles to visit temples we missed in the previous day’s van tour. But the sandy trails and intermittent drizzle posed several challenges, so we opted to go on foot.

Somewhere past the grandeur of Thatbyinnyu Temple, I absentmindedly asked our friend: “So Aya, why is it you’re traveling alone? To nurse a heartbreak?”

“Actually, yes,” Aya, stopping in her tracks, said gingerly, adding she had just split up with her fiancé, and smiled.

Bretha glared at me, and turned to Aya apologetically, “Don’t mind him, I think yesterday’s betel nut hasn’t worn off yet.”

Bretha took it from there and the two women talked about what women talk about while admiring the beauty and incorporeal qualities of temples.

We went inside must-see structures, such as the elegant Sulamani Temple. As we scaled the upper decks, the sight of an even more massive pyramid-shaped temple emerged in the distance. No stranger to pyramids, even our Egyptian friend was impressed at the sight. We decided to make it our last stop.

As we explored the brick interiors of the “pyramid,” something felt oddly familiar, as though we’d seen it before. In our past lives, perhaps? Alas, ancient souls we must be, all three of us! But our musings were cut short when we realized that indeed we’d been here yesterday, during the van tour, and by some sort of sorcery, we found our way back.

I’d later learn that this structure, Dhammayangyi, the largest Buddhist temple in Bagan, was built as an act of atonement by the king who came to power by killing his father and elder brother. The king himself was assassinated, so construction was halted and the temple remains unfinished to this day, a tragic monument to avarice and remorse.

Where are we from?

We headed back to the hotel via a different path, passing through smaller sacred structures, some inhabited by goats and surrounded by cattle and strays, where smiling children with probing eyes, faces smeared with thanaka, would approach us, asking, “Where you from?” I would exclaim, “We’re from the Philippines!” To our surprise, the child would show us a Philippine bill or coin, then segued whether we wanted some trinkets as souvenirs.

We soon realized that every child we’ve encountered since day one here in Bagan would say, “Where you from?” Such was their classic opening line, their marketing hook. Each time we declined, and each time sullen eyes would follow us as we walked away.

“Since you travel a lot,” Bretha asked Aya, “Have you ever felt discriminated against?” Aya revealed she does get some odd stares now and then because of her hijab, which, while it protects her head from the elements, does keep some types of people at a distance. “This hijab,” Aya said, “it’s both a blessing and a curse.”

Since Aya was flying back to Yangon that afternoon, the three of us decided to drop by the market before going back to the hotel for check out. As in most of Myanmar, the locals with kwan-yu stained mouths and teeth still wore their longyis. The market air filled with scents and odors — spices, produce, firewood smoke, freshly rolled tobacco, rain-drenched earth. A familiar sight caught my eye and tingled my nerves: palm-sized heart-shaped leaves, white powdery slake, and chopped nuts. I turned to Bretha and Aya: “Where you from, ladies? Would you like some kwun-ya?” The two beautiful women exchanged meaningful, mischievous glances and beamed their pearly whites.