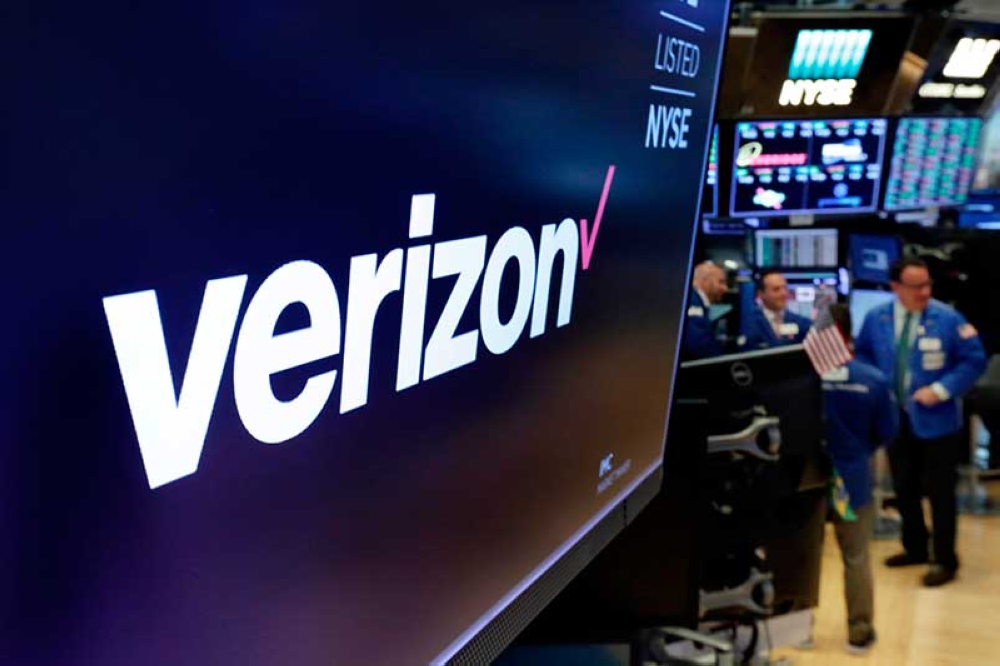 NEW YORK. This April 23, 2018, file photo shows the logo for Verizon above a trading post on the floor of the New York Stock Exchange. Cellular companies such as Verizon are looking to challenge traditional cable companies with residential internet service that promises to be ultra-fast, affordable and wireless. (AP)

NEW YORK -- Cellular companies such as Verizon are looking to challenge traditional cable companies with residential internet service that promises to be ultra-fast, affordable and wireless.

Using an emerging wireless technology known as 5G, Verizon's 5G Home service provides an alternative to cable for connecting laptops, phones, TVs and other devices over Wi-Fi. It launches in four US cities on Monday.

Verizon won't be matching cable companies on packages that also come with TV channels and home phone service. But fewer people have been subscribing to such bundles anyway, as they embrace streaming services such as Netflix for video and cellphone services instead of landline.

"That's the trend that cable has been having problems with for several years, and a trend that phone companies can take advantage of," Gartner analyst Bill Menzes said.

That's if the wireless companies can offer a service that proves affordable and effective.

T-Mobile and Sprint are also planning a residential 5G service as part of their merger proposal, though few details are known.

Verizon's broadband-only service will cost $70 a month, with a $20 discount for Verizon cellular customers. According to Leichtman Research Group, the average price for broadband internet is about $60, meaning only some customers will be saving money.

Even so, Verizon can try to win over some customers with promises of reliability.

Verizon says its service will be much faster than cable. That means downloading a two-hour movie in high definition in two minutes rather than 21. The service promises to let families play data-intensive games and watch video on multiple devices at once, with little or no lag.

"The things that really matter to a customer are how fast it is and how reliable it is," longtime telecom analyst Dave Burstein said. In tests of Verizon's 5G so far, he said, "reliability is proving out quite nicely."

The residential 5G service is part of a broader upgrade in wireless technology.

Verizon has spent billions of dollars for rights to previously unused radio waves at the high end of the frequency spectrum. It's a short-range signal, ideal for city blocks and apartment buildings, but less so for sprawling suburbs or rural communities. That's why Verizon is pushing residential service first, while AT&T is building a more traditional cellular network for people on the go, using radio waves at the lower end.

AT&T is aiming to launch its 5G mobile network this year in 12 cities, including Atlanta and Charlotte, North Carolina. Dish also has plans for a 5G network, but it's focused on connecting the so-called "Internet of Things," everything from laundry machines to parking meters, rather than cellphones or residential broadband.

Sprint tried to introduce residential wireless service before, using a technology called WiMax, but it failed to gain many subscribers as LTE trumped WiMax as the dominant cellular technology. This time, Verizon is using the same 5G technology that will eventually make its way into 5G cellular networks.

The Verizon service will start in parts of Houston, Los Angeles, Sacramento, California, and Indianapolis.

For now, Verizon isn't planning to hit markets where it already has its cable-like Fios service. Verizon stopped expanding Fios around 2010, in part because it was expensive to dig up streets and lay fiber-optic lines. Verizon can build 5G more cheaply because it can use the same towers available for cellular service.

That said, Verizon might not recoup its costs if it ends up drawing only customers who stand to save money over cable, said John Horrigan, a broadband expert at the Technology Policy Institute.

And while Verizon says the new network will be able to handle lots of devices at once, anyone who's tried to use a phone during concerts and conferences will know that the airwaves can get congested quickly.

What Verizon's service won't do is extend high-speed internet access to rural America, where many households can't get broadband at all, let alone competition. Cable and other companies haven't found it profitable to extend wires to remote parts of the country. But Verizon will face the same problem, given that its short-range signal will require several wireless towers closer together. That's feasible only in densely populated areas.

That's not good enough, said Harold Feld, senior vice president of the advocacy group Public Knowledge. He said internet service at reasonable prices is "fundamental" for all Americans — not just those who live in populated areas.

T-Mobile and Sprint want to jointly create a 5G network that would also offer residential wireless broadband, but not for a few years. In seeking regulatory approval, the companies say 20 percent to 25 percent of subscribers will be in rural areas that have limited access to broadband. But the companies offered no details on how they would do so. T-Mobile and Sprint declined to comment. (AP)