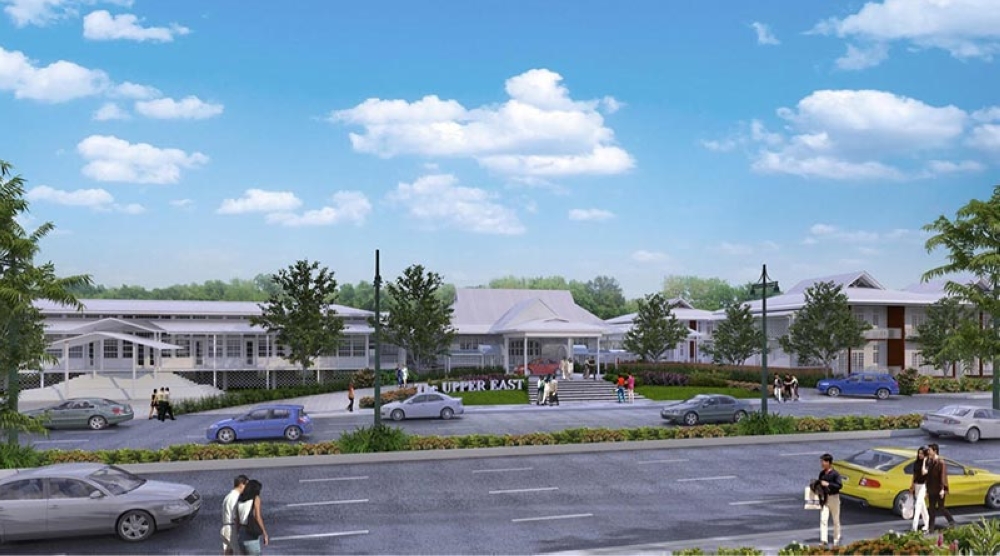 The perspective of the P500 million worth of luxury boutique hotel to be built by property giant Megaworld Corp. inside the 34-hectare township project called The Upper East located on the eastern side of Bacolod City that used to be the Bacolod-Murcia Milling Company compound. (Contributed photo)

IN ITS bid to be the biggest hotel developer in the Philippines by 2020, property giant Megaworld Corp. is introducing more hotel brands in the country including the P500 million worth of luxury boutique hotel it will build in Bacolod City.

This was announced by Megaworld–Bacolod vice president for sales and marketing Rachelle Peñaflorida and Megaworld senior assistant vice president and head of public relations and media affairs Harold Brian Geronimo in a media briefing at L'Fisher Hotel in Bacolod City Monday, October 1.

Peñaflorida said the hotel is one of the major attractions inside the 34-hectare mix-use development project called The Upper East located on the eastern side of the city, near the government center, that used to be the Bacolod-Murcia Milling Company compound.

The P500 million forms part of the P28-billion investment poured in by Megaworld for the entire development of the township project, which was officially announced in July this year.

Peñaflorida said the luxury boutique hotel will be another landmark in The Upper East. The development will start late next year and is expected to be completed in 2022.

“The hotel will be a perfect venue for conventions, weddings and memorable celebrations as it integrates an outdoor garden setting into its ballroom facility,” she said, adding that “Megaworld is keen on helping boost the meetings, incentives, conferences and exhibitions (Mice) tourism industry of Bacolod City.”

The hotel along the township’s six-lane Upper East Avenue will feature 48 spacious suites.

It will also house an all-day dining restaurant, café, courtyard, swimming pool and pool deck, fitness center, lanai, and its own Zabana Bar, the signature hotel bar concept of Megaworld.

Peñaflorida said the hotel ballroom will be connected to an expansive tropical garden.

It will become the city’s biggest hotel ballroom facility that can fit around 1,000 guests in a banquet setting. It can also be divided into three separate ballrooms for smaller event requirements, she added.

Geronimo said the hotel will also feature an organic herb garden. The firm will grow and plant its own spices and vegetables to be used in the hotel’s restaurants.

“It is not tall, the hotel will be more of a garden facility,” he said, adding that “this is something new in Bacolod City.”

Meanwhile, the company said it has not decided yet as to who will manage and operate the hotel.

Geronimo, though, said Megaworld has its own Megaworld Hotels Group with three existing brands such as Richmonde, Savoy, and Belmonte.

Geronimo pointed out that since Megaworld is into heritage preservation, it is doing an "adaptive reuse" of the three heritage houses within the Bacolod-Murcia Milling Company Compound.

The firm tapped and commissioned Architect Dominic Galicia, a renowned heritage architect and conservationist in the country, to retrofit and restore these old structures making part of the hotel.

Galicia was the architect of the redesigned building of the National Museum of Natural History in Manila, which opened late last year.

The hotel’s main lobby will be a retrofitted heritage house that used to be the guest house. Beside it will be another wing that previously houses the guest rooms for visitors, which will be converted into a ballroom facility.

Geronimo said the other house, the newest of the three, will be expanded to make it part of the guest room wing of the hotel.

“This is something that Bacolod City and Negros Occidental will really be proud of,” he said, adding that the train or “bagon” will also be restored making it part of the hotel attraction.

Quoting Galicia, the firm officials said that as a landmark of Bacolod City, “the hotel will express the noble intent of remembering and anchoring in a glorious past as we move towards what we dream to be a glorious future.”

Moreover, as the township gears up for the construction of its first hotel development, Megaworld also announced that it is upgrading its first residential condominium development called One Regis.

From a nine-storey residential condominium development at The Upper East, it will now become a 12-storey tower.

Aside from the original amenities that include a swimming pool and kiddie pool, pool lounge and seating areas, fitness center, events hall, male and female shower rooms and a walk park, the condominium development will also feature its own wellness lounge and game and entertainment room for the exclusive use of its future residents.

Up for completion by 2022, the total projected sales for One Regis is pegged at P1.2-billion.

“As we saw an overwhelming reception to our first condominium development in The Upper East, we believe that this project deserves an upgrade with more amenities, more facilities and more unit options that perfectly fit the Bacolod lifestyle,” Peñaflorida added.

In 2015, Megaworld announced that it is investing about P35 billion for 87-hectare township development projects in the province up for completion within the next 10 years.

The other project is the 53-hectare Northill Gateway worth P7 billion situated along airport access road, bordering the cities of Bacolod and Talisay.