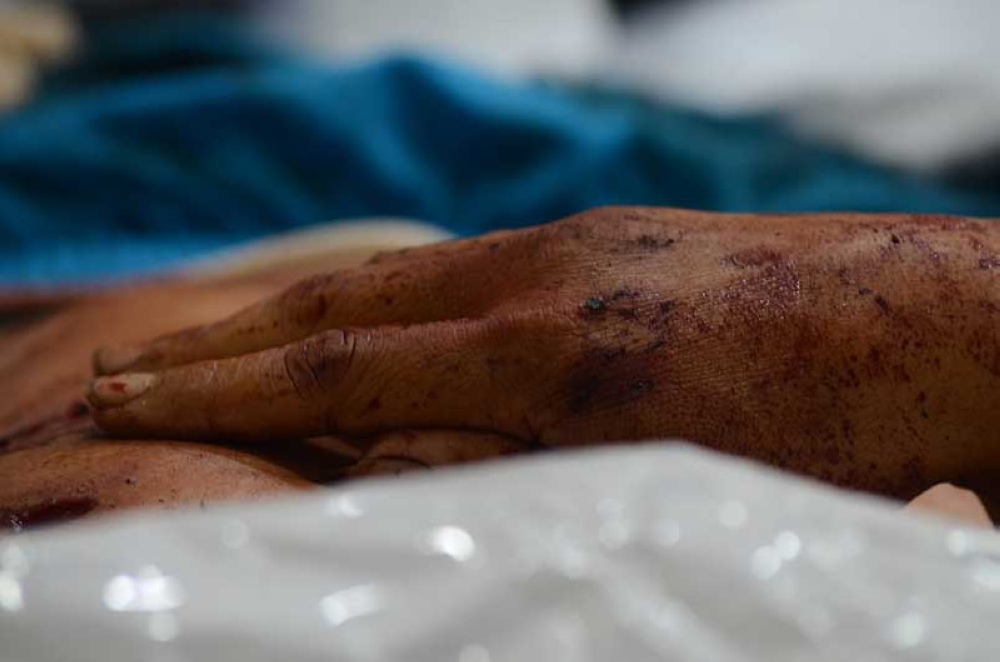 CEBU. One of the suspected drug users killed in Lapu-Lapu City on Thursday, October 4 during the PRO-Central Visayas One Time Big Time Operation. (Alan Tangcawan/Superbalita Cebu)

WITHIN 24 hours, 16 men were killed in drug-related shootings in Metro Cebu.

Fourteen men were killed in police operations and in a shooting incident in the cities of Talisay and Cebu yesterday. Last Wednesday, two were killed in drug-related shootings in Minglanilla town and Lapu-Lapu City.

One of the victims was identified as Christopher Tanga, a call center agent who earned an extra income as a motorcycle-for-hire driver.

The other fatalities who were claimed by their relatives at St. Francis Funeral Homes were Lyster Abella, 26, Ronaldo Tayor and Diover Vanz Sanjorjo.

The survivors were motorcycle-for-hire driver Antonio Bilandes and Sharmaine Puran, who both claimed that policemen were behind the shooting.

Senior Supt. Royina Garma, the Cebu City Police Office director, has ordered a thorough investigation on the incident, which could be related to illegal drugs.

In the simultaneous anti-criminality raids conducted by the Police Regional Office (PRO) 7, nine suspected drug personalities were killed in the cities of Talisay and Cebu.

Ten suspected drug personalities have died in the One Time Big Time (OTBT) operations initiated by PRO 7 in the past 78 days.

An initial P7 million worth of illegal drugs were seized in the two cities.

Chief Supt. Debold Sinas, PRO 7 director, said the OTBT operations against the slain suspects were legitimate. The operatives, he said, retaliated when the suspects opened fire at them first.

He said they are open to investigation by the Commission on Human Rights and other government agencies.

In the Malubog incident, Sinas and Garma denied the accusation of Bilandes and Puran that the police perpetrated the killings.

A team from the Scene of the Crime Operatives (Soco) recovered around 30 empty shells of different calibers in the area.

The team also found two big packs containing a white crystalline substance believed to be shabu inside a van found in the area. Firearms, cell phones and receipts were also recovered in the vehicle, which was riddled with bullet holes.

Two of the dead men were found inside the van, while three others were lying on the ground near two motorcycles.

The crime scene is about 200 meters from the detachment of the Cebu City Mobile Force Company.

Sinas said they will check the owner of the vehicles and conduct ballistic tests on the firearms to determine if these were used in past crimes.

In the OTBT operations, Sinas said they implemented more than 100 search warrants. They arrested 76 persons involved in the illegal drug trade and six persons who carried unlicensed firearms.

They also arrested 23 persons who have pending warrants of arrest for various offenses.

The operatives from the police offices of Cebu City, Mandaue City, Lapu-Lapu City and Cebu Province caught 60 persons as of 11 a.m. yesterday.

This is the third phase of the One Time Big Time (OTBT) operations under Sinas.

In the first OTBT last July 18, six alleged drug personalities were killed in the operations initiated by the PRO 7.

Three suspects were killed in Talisay City; two in Mandaue City; and one in Carmen. PRO 7 Director Debold Sinas said the suspects were armed and resisted arrest.

Operatives also arrested 74 persons then. They seized 721 grams of “shabu” worth P8.2 million and uprooted P3.4 million worth of 8,520 fully grown marijuana plants.

The PRO-Central Visayas conducted another OTBT operation, which resulted in the deaths of three suspected pushers last Aug. 23.

Those who died were in Talisay City, Mandaue City and Moalboal.

The killing spree started at around 5:45 p.m. on Wednesday when the live-in-partner of Minglanilla’s most wanted drug suspect was shot to death by unknown assailants while walking in Barangay Ward 4, Minglanilla.

Prior to her death, Evangeline Briones, 31, was facing various charges including illegal drug possession and two counts of murder.

Chief Insp. Verñino Noserale, Minglanilla police chief, said Briones was walking on Tres de Masyo St. in Barangay Ward 4 when an unidentified person suddenly approached her and shot her on the head using an unknown caliber of firearm before fleeing.

Noserale believe that Briones may have been killed by some of her rivals in the illegal drug trade.

Prior to her death, Briones reportedly continued the illegal drug operation of her late common-law husband, Juvi Franza.

Earlier this year, Franza was killed in a police operation in his home in Barangay Tulay, Minglanilla.

Franza was reportedly with Briones and their son during the operation.

Though she escaped arrest, Briones was charged with murder and illegal drug possession.

Briones was also accused of the murder of Franza’s estranged wife and her lover in Barangay Tulay last April.

Two hours and thirty minutes later, Crisolito “Sonny” Unito, who was believed to be a member of an Ozamis City crime syndicate, was killed after he allegedly tried shooting at police operatives trying to serve three warrants of arrest against him last Wednesday night at Deca Homes 4 Subdivision, Barangay Bankal, Lapu-Lapu City.

Unito figured in the Top 6 of the most-wanted persons of the Police Regional Office (PRO) 9 and was considered a high-value target of the Ozamis City Police Office.

At around 8:15 p.m. last Wednesday, Unito noticed the presence of the police in the area, which prompted him to take out his firearm in an attempt to shoot at the police.

The joint forces of PRO 9 and LLCPO, though, noticed and shot Unito, who had warrants of arrest for murder, robbery and robbery with violence and intimidation in Ozamis City. He was tagged as a member of the “Dragon” group, a crime syndicate in Ozamis City headed by Manuel Francisco, also known as Maning Lapad, which has ties to the Parojinog group of Ozamis City.

Some members of the Parojinog group were traced to Cebu following their move from Ozamis City after they were tagged as high-value targets. The group was suspected to be drug couriers traveling between Mindanao and Cebu. They reportedly store their drugs in a warehouse in Mandaue City. with JKV & FVQ