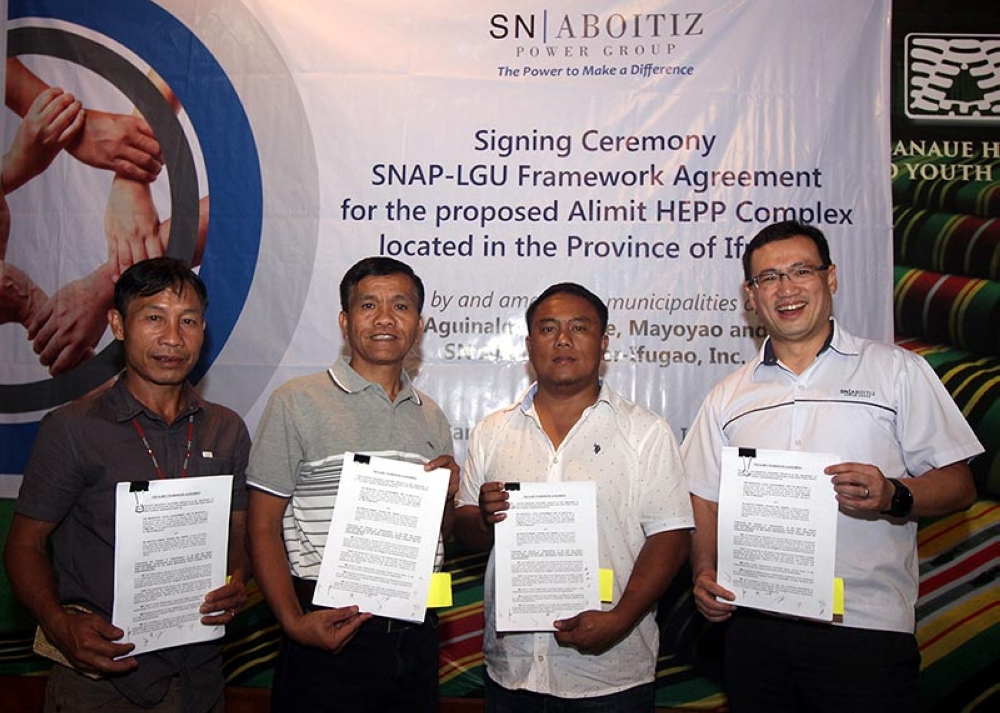 AN AGREEMENT spanning half a century has been inked.

Ifugao Governor Pedro Mayam-o welcomed the project saying it will boost the economy while preserving the environment of the province.

"We have nothing to lose but many things to gain. The province will benefit in terms of employment, taxes and utilization of God-given natural resources," Mayam-o said.

The governor said Ifugao is rich in natural resources and it is best to take advantage of it, in terms of economic value to its people, quashing fears of losing water for irrigiation.

He said it took them four years to get the consensus of 81 barangays and engage with four Indigenous Peoples Organizations.

The framework agreement sets the standards for the relationship of stakeholders of the towns with SNAP Ifugao as well as guidelines to fortify cooperation, collaboration and partnership for the coming years.

There are three components to the 140 MW project: the main hydroelectric power plant (120 MW) and a diversion power plant (20 MW).

The project aims to draw water from the Alimit and Ibulao rivers tributary to the Magat river between Lagawe, Aguinaldo and Mayoyao towns, building an impounding reservoir to be supplemented by water to be diverted from the Ibulao river going to the Alimit river giving SNAP a 140 MW of capacity in the area.

Valdal said the four-year course of the crafting of the framework a facet of a project as complex as the Alimit HEPP.

"A four-year feasibility is needed to appreciate, understand and learn what the project is all about, this is the start of a relationship until 20 4," Valdal added.

Originally, the proposed complex was seen to have a power generating capacity of 390 MW with its third component, a 2s0 MW pumped storage put on hold due to market constraints.

The river is 33 kilometers long from its upper trenches in Aguinaldo and Mayaoyao to its confluence with the Magat Dam reservoir in Dulao, Lagawe in Ifugao.

Only the municipality of Lamut has yet to sign the framework agreement despite the concurrence of its IPO led by James Tayaban, it is hoped to reach an agreement in the next three weeks.

Mayam-o said with the construction of a dam weir, irrigation to the 4 towns will not be affected and lauded SNAP Ifugao for following all provisions of law as well as community beliefs and traditions.

The Alimit HEPP was awarded 3 renewable service contract by the Department of Engery in 2014 signalling Snap Ifugao to bankroll talks with the municiplaities of Lamut, Mayoyao, Lagawe and Aguinaldo.

When Lamut signs the agreement Snap will submit all documents to the National Commission on Indigenous Peoples (NCIP) for its anticipated decsion to allow the company to proceed with the conduct of the Free Prior and Informed Consent (FPIC) process between itself and the IPO of each town, ending the fasibility stage of the project, inching closer to construction of the HEPP.