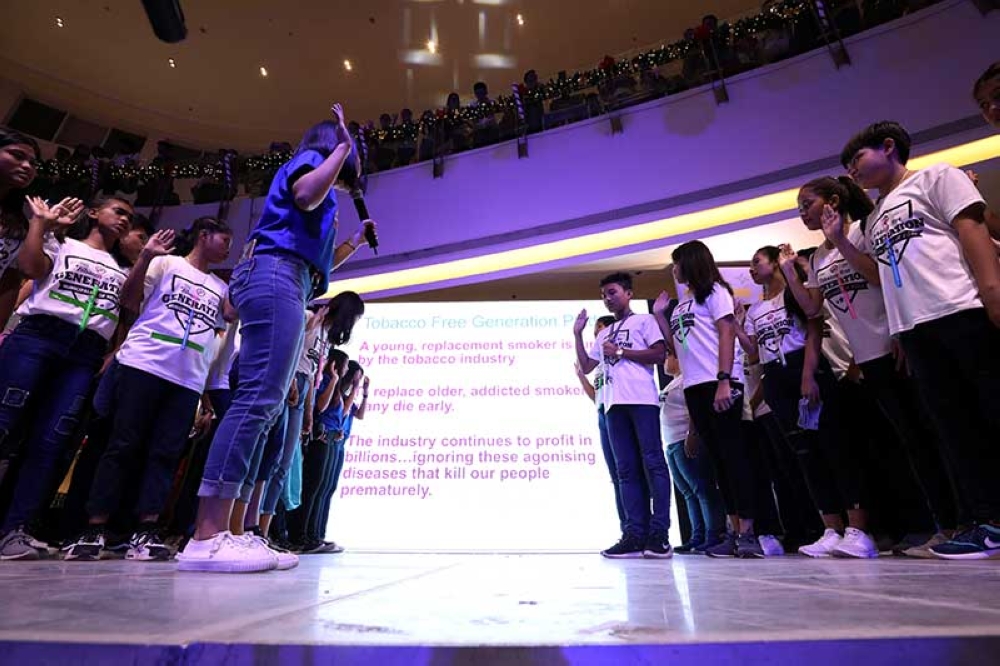 NEVER TO SMOKE. Some 5,000 Bataan students vowed to never smoke in their lifetime. (Contributed Photo)

BALANGA CITY, Bataan -- The Department of Education (DepEd) reaffirmed its strong commitment to continue its fight against smoking, and to promote a healthy environment in and around schools and DepEd offices during the Tobacco-Free Generation (TFG) culminating activity held at the Vista Mall here recently.

In front of 5,000 Bataeño learners in attendance, Education Secretary Leonor Magtolis Briones reiterated the salient features of DepEd Order No. 48, s. 2016, or the Policy and Guidelines on Comprehensive Tobacco Control, which applies to all DepEd officials, teaching and non-teaching personnel, and all elementary and secondary students while in DepEd offices and school premises, or during official events and school activities held outside DepEd.

Through DO 48, DepEd also prohibits the establishment of Designated Smoking Areas in schools and all DepEd offices, as mandated by the law. It also tasks the Child Protection Committee (CPC) of each school to report violations of tobacco control measures at the school level. The CPC, whose chairperson is the school principal, shall report violations of the absolute smoking ban in the premises of schools, and of the ban on the sale, advertisement, and promotion of tobacco products in and within the 100-meter perimeter of the premises of all schools.

This school year, the Department also rolled out EskweLA BAN sa Sigarilyo, a project implemented in partnership with the Tobacco-Free Kids Action Fund, aimed at strengthening the implementation of the Department’s comprehensive tobacco control policy in all schools nationwide.

Other government agencies which pledged their support to the TFG Campaign include the Department of Health (DOH) and the National Youth Commission (NYC).

Briones also shared her personal crusade against tobacco: “I support the Tobacco-Free Campaign not only because I am secretary of education. I grew up with the belief that the human body must not be destroyed by vices. I was taught never to smoke,” she stated.

She also shared the “Tax Tobacco to the Max” campaign of Social Watch Philippines, a civil society organization of which she was the Lead Convenor, to deter smoking and increase funding for universal health coverage.

“Social Watch Philippines is an active partner of the Department of Health to increase taxes on cigarettes and limit its consumption through a signature campaign,” added Briones.

Towards a tobacco-free Bataan

With the active and strong initiatives of local government officials in Bataan and the TFG movement headed by its founder Dr. Koong Heng Nung, Bataan residents born from 2000 onwards are encouraged to vow to never smoke in their entire life.

Bataan Governor Albert Garcia said that the provincial government prioritizes the health of its constituents and implements projects that are geared towards the improvement of hospitals, rural health units, and barangay centers.

“We want our people to have a healthy lifestyle through balanced diet, exercise, and practice of no smoking,” Garcia said.

The TFG Movement in Bataan started in 2016, and has completed its information campaign this year with 44,173 students from 44 junior high schools who committed to never smoke in their lifetime. (PR)