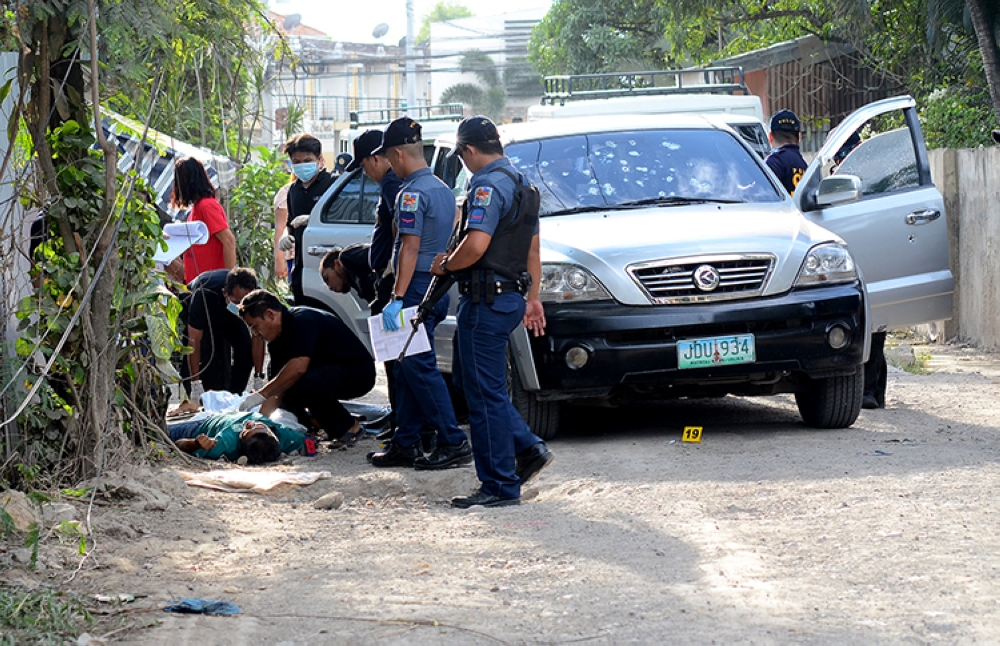 Crime scene. Police checked on the body of the vehicle’s driver, Dennis Patiluna, at the crime scene in Barangay Pooc, Talisay City where a cop, Patiluna and another were ambushed. (SunStar Foto / Alan Tangcawan)

A POLICE officer, who was in President Rodrigo Duterte’s narco list, and his two companions were gunned down in Sitio Ranger, Barangay Pooc, Talisay City Friday noon. A scavenger who was at the wrong place at the wrong time died from a stray bullet.

This is the third time in just a month where multiple people were killed in one shooting incident. The death toll in Cebu has also risen to 184 in just 134 days—that’s more than one person killed every day.

Patiluna was the driver of the SUV. His body was found outside the vehicle, indicating that he tried to run away during the ambush.

A scavenger identified as Cresenciana Rangos, 50, was also found dead 200 meters from where the SUV came on a standstill after it was peppered with bullets.

Cortes was among those in Duterte’s list of dirty cops involved in illegal drugs.

But a source told SunStar Cebu that Cortes had been cleared in Camp Crame six months after the list was publicized.

Cortes, though, was fond of cockfighting. A fighting cock was found inside the silver Kia Sorento (JDU 934) the victims were in. The cock survived the shooting.

An eyewitness said that Cortes and his companions tried to fight back. A bullet from the exchange hit Rangos.

Patiluna was still able to drive the vehicle for 200 meters before it fully stopped.

Cortes was found in the front passenger seat.

The police will have to investigate further because there are different information concerning the killers. There were Facebook posts that indicated that the shooters were on board a four-wheel vehicle.

The police will check if there are closed circuit television or CCTV cameras in the area. They will also wait for the report of the Scene of the Crime Operatives 7 because there was a bullet from an ArmaLite found in the crime scene.

A security guard in the area who refused to be identified told radio dyHP that he saw the victims’ vehicle moving fast while a motorcycle was hot on their heels.

The guard estimated that the exchange of fire lasted 20 minutes.

The guard also noticed that a motorcycle with someone riding pillion staying at a corner before the victims’ vehicle passed by.

Cortes’s wife Leda said that the police officer was on his way home from Barili where he attended a hearing of a case.

Conag said that Cortes, known as Mikmik to his friends, was a member of the Barili Police Station before he was transferred to Sulu in the Autonomous Region for Muslim Mindanao.

Cortes’ relatives said that the policeman owned a house and a farm with fighting cocks in Barangay Biasong.

Conag could not deny that Cortes’ connection to the illegal drugs trade could have caused his demise. But the investigation will continue.

“That’s most likely the motive because it’s really a dangerous time to be linked to the illegal drugs trade,” said Conag. But he did not comment on Cortes’ name being in Duterte’s narco list.

The number of deaths in Cebu has already caught the attention of some senators.

The senators belonging to the minority bloc have called for an immediate investigation on the spate of killings in Cebu, particularly those under the one-time, big time (OTBT) operations.

But the inquiry will not dampen the police’s campaign.

Tolentin said they are confident that they can defend their anti-drug campaign, including the OTBT operations that killed 19 suspected drug personalities in the past three months under PRO 7 Director Debold Sinas. with KAL