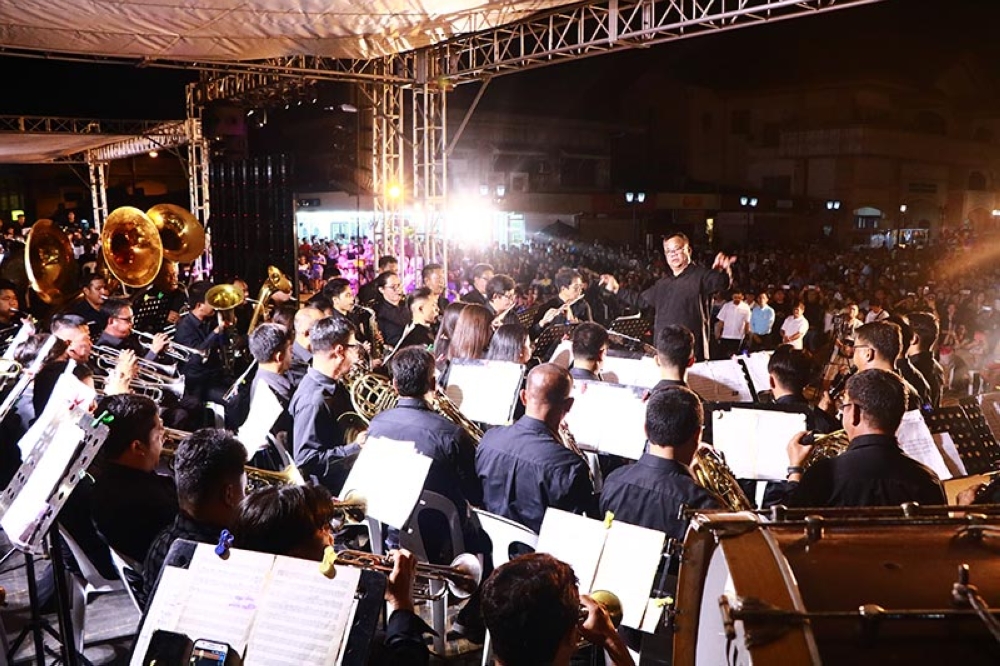 PAMPANGA. A brass band ensemble serenades hundreds of Angeles City residents and tourists who trooped to the Sto. Rosario Heritage District a day before the Feast of Our Lady of La Naval. The event is one of the highlights of the month-long observance of Fiestang Kuliat. (Contributed photo)

HUNDREDS of residents and tourists in Angeles City trooped to the Sto. Rosario Heritage District recently to experience a night of musical spectacle as the city government here staged a bigger “Serenata” as part of the month-long Fiestang Kuliat.

Serenata or “serenade” has been a tradition in Angeles City held every second week of October, a day before the Feast of Our Lady of Holy Rosary La Naval de Angeles. The Band 88 of Sta. Maria, Bulacan and Band 33 of San Antonio, Bacolor participated in this year’s edition of the event with no less than 50 brass band members per delegation.

“Serenata is staged every year so that people can experience our beautiful city and its rich arts and culture. It has also become the city’s tribute to one of its patron saints, the Our Lady of Holy Rosary,” Angeles City Tourism Office (Acto) head John Montances said in his welcome speech.

Joy Cruz, Acto Deputy for Heritage, Culture and Arts, explained that the tradition dates back in 1860 and was discontinued during the eruption of Mt. Pinatubo in 1991.

This year, Acto is bringing back this traditional open-air musical extravaganza featuring top rondalla and brass bands in the province serenading to the tune of folk and contemporary music.

Cruz also said that during the first term of Mayor Edgardo Pamintuan in 2011, he started the Serenata again as “he wants to maintain this old tradition among Angeleños.”

“He [Mayor Pamintuan] is pushing the development of the city as a cultural destination and center for the promotion and preservation of culture and tradition,” Cruz added.

For his part, Pamintuan said that the centuries-old traditions of the Angeleños weave the invaluable assets of the city’s rich artistic tapestry.

“These traditions reflect who we are as Angeleños. I hope that this cultural renaissance in the city will continue for this will pave the way to the rediscovery of our tangible and intangible cultural assets,” Pamintuan said.

The ceremony ended with a spectacular fireworks display. (PR)