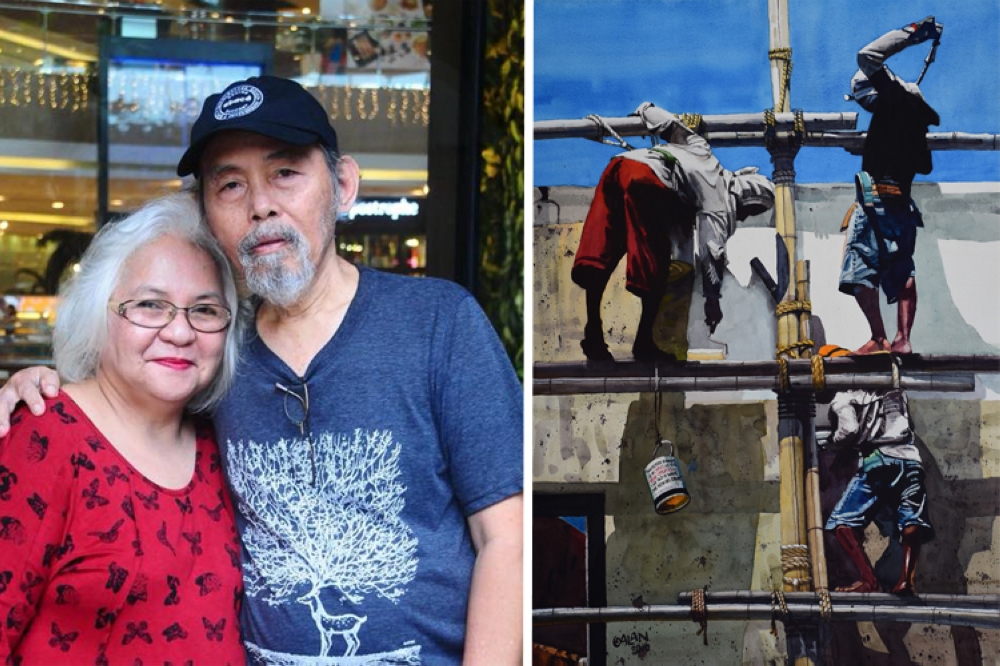 Fred Galan with his wife, Marivel Galan and his artwork 'Cover Up'

SWIMMING through the colorful waters of life is how Siegfredo “Fred” Rosales Galan prefers to spend his time. Wading through with his brush, and framing such picturesque views with his canvas, Fred Galan is best known as one of Cebu’s most prominent watercolor artists. He’s also one of the founders of Cebu’s Watercolor Society.

Spending 58 years of his life painting, the artist has contributed much to Cebu’s art industry. However, the fame that comes with the name is not only because of the masterful technique he’s learned throughout the years—controlling a troublesome medium such as watercolor—but also because of the cause which he dedicates his creations to.

With his art, Fred communicates his faith and shares his gifts which he humbly acknowledges as a gift received from the Almighty. This purpose makes his artworks a conduit of belief and a reflection of life which is a way of giving back, a way of thanking God for what was given to him.

As a messenger of faith, the artist never fails to remind his audience of the message his artworks hope to relay. He talks to them during exhibits and even offers a prayer to those who need them once in a while. It is with this mission that Fred was blessed with the opportunity to connect to a wider audience by making his artworks reach the international sphere.

Last April 8, Fred was announced as one of the winners of the Universal Watercolor Exposition, an international competition organized by the International Watercolor Society. Over 1,200 paintings from 70 countries were submitted online and out of all of them, only three artworks were chosen. Fred won together with Teijun Chao (Australia) and Surentsetseg Munkhbaatar (Mongolia). The award is the most prestigious one yet achieved in the watercolor medium by a Cebuano artist.

Humbly enough, the artist admitted that joining the competition was never a priority. It was merely by chance that he was able to join. In fact, it was his wife, Marivel, who submitted the artwork on the last day.

The artwork entitled “Cover Up,” showed construction workers painting a wall. Fred explained that the painting shows that most of the time, people cover up their problems instead of fixing them like what the workers were doing in the artwork; covering cracks on a wall by painting over them. It shows much of the problems within the country, covering one mistake over another. According to the artist, the method of covering up overlooks the first step to achieving a solution, and that is to acknowledge the existence of a problem. Most of the time, people from different walks of life go about their days keeping their cracks to themselves. Only when it is too late do these show; the cracks have not been solved and have only gotten worse and beyond repair—much like some public projects that end up being abandoned.

The winning pieces are currently being exhibited in China in the 2018 First Universal Watercolor Exposition.