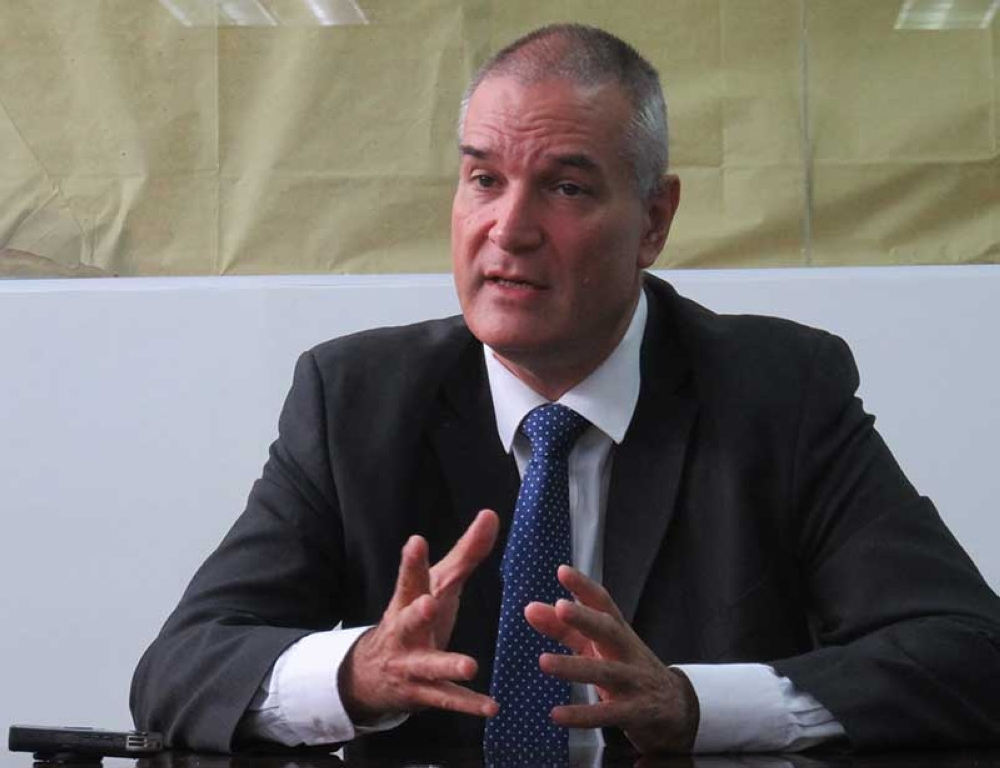 WORKING IT OUT. If efforts are fruitful, the Philippines could have a direct flight to Israel, said Israeli Ambassador to the Philippines Rafael Harpaz. (SunStar photo/Allan Cuizon)

A NON-STOP flight between two countries is seen to perk up trade and tourism of both.

In an interview yesterday, Harpaz said that while they keep an eye on the Philippines, the presence of a direct flight would maximize the potentials of both countries in people-to-people exchanges and trade relations.

According to Harpaz, both countries are eyeing to establish a direct flight by next year. If this happens, this would make travel to the Holy Land a lot more accessible. He also expects a boost in trade activities.

Reports said that Philippine Airlines will soon open a direct flight between Manila and Tel Aviv in Israel by this year or in 2019. With this planned direct connection, flight time will be cut short to only 10 hours.

At present, Filipinos who travel to Israel pass through Thailand, Hong Kong, Turkey and Jordan.

Harpaz pointed out that tourism is an important pillar to maintain the long-standing relationship of Israel and the Philippines. Israel maintains a close relationship with the Philippines after it opened its doors to the Jews during the time of the Holocaust.

At present, Philippine passport holders can enjoy visa-free access to Israel up to 90 days. The ambassador said most Filipinos who come to Israel are part of pilgrim tours.

The ambassador’s visit to Cebu is part of Israel’s friendly gesture to also build ties with the different provinces in the country, following the recent state visit of President Rodrigo Duterte to Israel, where both countries signed 21 deals which could translate to 790 additional jobs for Filipinos.

Recently, Duterte signed a seven-year oil exploration deal with an Israeli firm to develop the country’s own energy sources. Ratio Petroleum can now explore Area 4, which covers 416,000 hectares across the East Palawan Basin, for potential oil and gas resources. If successful, this would lessen the country’s dependency on oil importation.

“I hope this will give the Philippines more blessings,” said Harpaz.

Besides oil exploration, both countries could work together in the areas of agriculture, innovation and technology, cybersecurity, tourism and manufacturing.

Israel could also be a potential destination for Filipinos who want to seek work abroad, especially caregivers.

The Ambassador noted that there are some 30,000 Filipino caregivers who are currently employed in Israel. They are also eyeing the possibility of opening Israel’s hotel industry to Filipino workers.

Moreover, dried mangoes, coconut oil and semiconductors are some of the Philippine products that are in demand in Israel.

CCCI signed a sisterhood agreement with the Israel Chamber of Commerce of the Philippines (ICCP) last year.

The two chambers agreed to undertake efforts to promote better relations, exchange information on chamber management and developments and important public and private opportunities in both countries, explore ways of promoting trade and industrial cooperation and facilitate joint ventures between Cebu and Israel, and to exchange delegations and organize joint meetings to promote the development of commercial exchange.