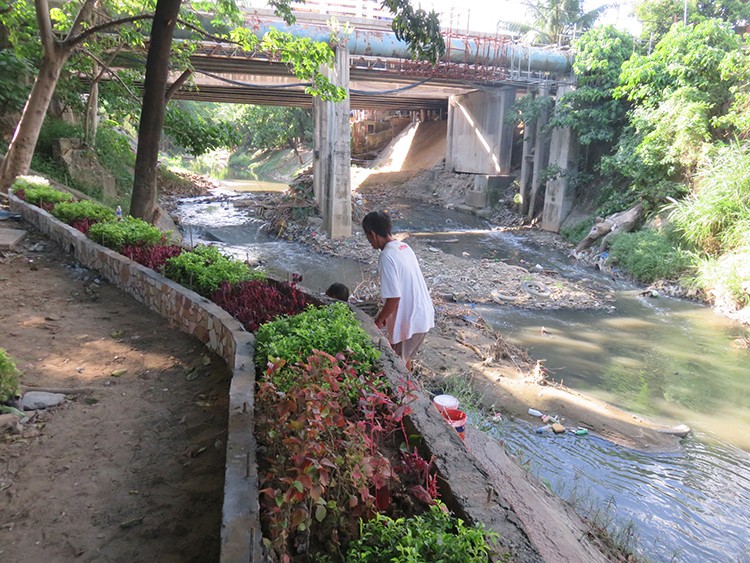 Shared Duty. This portion of the 20-kilometer Butuanon River in Mandaue City is part of the pilot area for the river’s rehabilitation. Aside from clean-up drives, the Mandaue City and Cebu City governments are focused on providing slope protection through sheet piling and riprap construction to prevent erosion. The Butuanon River starts from the mountains in upper Cebu City, crosses Mandaue City, then drains into the Mactan Channel. (SunStar Foto / Allan Cuizon)

CLOSE to 10 percent of the Butuanon River has been rehabilitated.

Mandaue City Mayor Luigi Quisumbing made this revelation when asked by members of the media during the presentation on Friday, Oct. 26, for the upcoming International River Summit (IRS), which Mandaue is hosting.

Quisumbing said they’ve started the rehabilitation on a one-kilometer stretch of the river that flows through Barangays Ibabao-Estancia, Alang-alang and Paknaan. The pilot area is near where the river meets the sea.

Aside from the weekly clean-up drive conducted by personnel from different city departments with the help of residents and workers of establishments in the vicinity, the City is also focusing on slope protection through sheet piling.

Slope protection on one side of the riverbank is half completed at a cost of P70 million to the City. The Department of Public Works and Highways (DPWH) and the LCP will shoulder the cost of the sheet piling on the other side, the mayor said.

The mayor said they chose the pilot area so the public can immediately see the result of everyone working together. He said they want the public to be inspired that the Butuanon River can be restored to its original condition.

The City also plans to launch the viewing deck on Nov. 6.

Vice Mayor Fortuna said Mandaue and the Cebu City Government have been working closely together to address the river’s rehabilitation since many of the river’s sources come from the latter’s mountain barangays.

He said Cebu City has been monitoring activities in upland villages to ensure these don’t contaminate the water that eventually forms the Butuanon River and it has also implemented several infrastructure developments.

The Butuanon River is 20 kilometers long, with 14 to 15 kilometers flowing in Mandaue City.

“Since technically, most of the Butuanon River is in the territorial bounds of Mandaue, we have to take responsibility. So we cannot control outside the City. We can only control what happens within. We are doing what we can to protect the Butuanon River,” Quisumbing said.

He said they plan to implement a catchment project in the pilot area as part of the river’s rehabilitation.

Go, in a separate interview, said they’ve been trying to change the public mindset that it’s okay to throw their garbage anywhere, especially in the canals, which flow directly to the river.

The rehabilitation of the Butuanon River has been getting more attention because of the summit that will be held between Nov. 22 and 24 in Mandaue City. It will be the fourth such gathering, with the Butuanon serving as the model river.

The summit will be attended by international speakers and river rehabilitation experts, who are expected to share their knowledge to help restore the country’s waterways.

Quisumbing admitted they need national and international assistance to return Butuanon River to its pristine condition.

Meanwhile, Cebu City Councilor Jerry Guardo, chairman of the committee on infrastructure, said the rehabilitation of the Butuanon River in Cebu City is on course.

The riprapping of banks in areas that are prone to flooding in Barangays Bacayan and Talamban continues, he said.

He said the City has been working with the Cebu City 1st Engineering Office after the City was tasked to monitor the implementation of the project.

Guardo said the water of the Butuanon River has a tendency to quickly overflow and wash away houses made of light materials during heavy rains.

Once the project is completed, Barangays Binaliw, Bacayan and Talamban should no longer encounter this problem since aside from the riprapping, they’ve also dredged the river, he said.

Guardo added that the contractors of the DPWH are also working on the rehabilitation of rivers in Pulangbato, Budlaan, Guadalupe, Tejero and the Mahiga Creek to control flooding. Fe Marie D. Dumaboc, Correspondent, & PAC