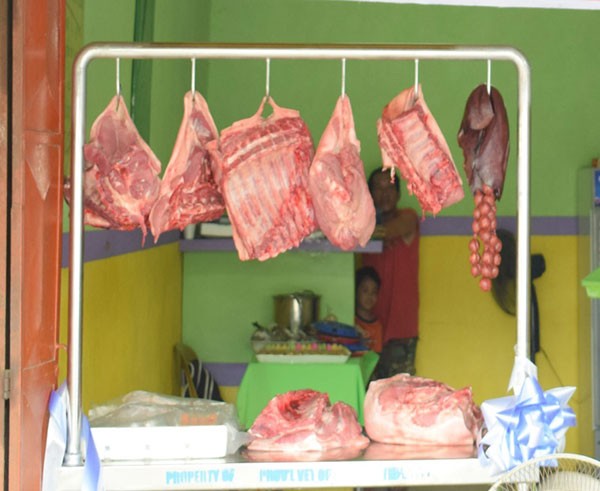 Meat products displayed and sold in one of the stalls in Negros Occidental. (Contributed Photo)

SUPPLY of livestock and poultry products, mainly meat, in Negros Occidental are expected to remain stable despite the increase in demand due to the influx of tourists for the just concluded MassKara Festival and the arrival of “balikbayans” for the upcoming holiday season.

Based on the price monitoring conducted by the Animal Health and Meat Inspections Services Division of Provincial Veterinary Office (PVO), there are no significant changes in the prevailing market prices of livestock and poultry products since October 1.

This resulted from the sufficient supply of the commodities in the province, Provincial Veterinarian Renante Decena said.

Meat and poultry consumption data of PVO showed that pork is the highest consumed commodity, at 37,595.11 metric tons annually.

There is also a surplus in chevon or goat meat, which is highly in demand in northern Negros.

Though there is a deficit in supply of beef pegged at 3,426.359 metric tons as well as eggs at 5,814.767 metric tons, it is expected that with the establishments of additional livestock and poultry farms in the province, the gap will be soon addressed.

Decena said commercial farm registration as provided under Provincial Ordinance has been effectively implemented by PVO.

As of October 2018, a total of 103 livestock and poultry farms were already registered.

“Existing players in the local livestock and poultry industry are also expanding their operations to cater for the expected increase of demand in the coming months,” he added.

Aside from commercial farms, the backyard sector is also contributing to the local supply.

Decena said improved production performance of their animals can be attributed to the continuous effort of the Provincial Government.

These are through the upgrading of the capability of backyard raisers and providing them with a genetically superior breed of animals, he added.