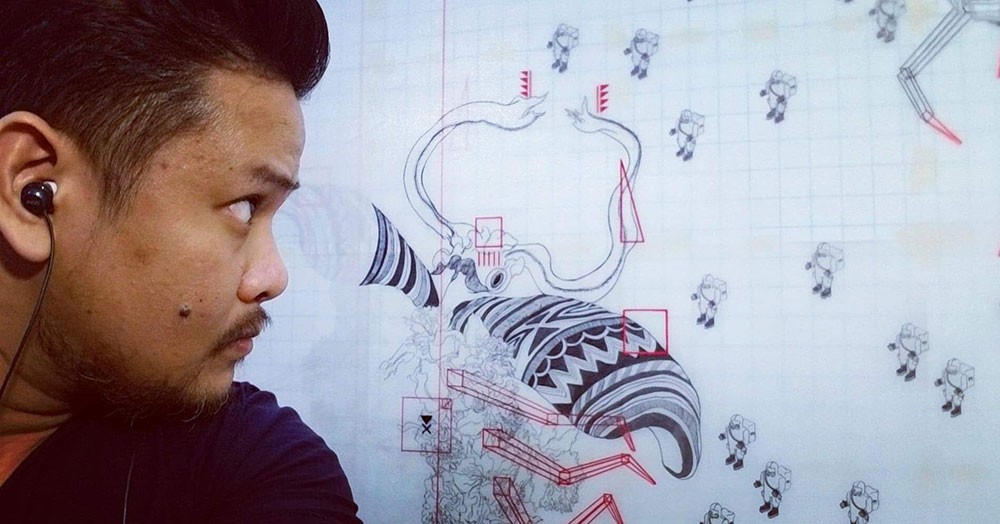 USA. US-based Filipino artist Chico Quizon and one of his mixed media works featured in his solo exhibit "Hypervisual," which runs from November 10 to 25 at Gallery Nine, Megamall. (Contributed photo)

JOSE "Chico" Quizon, a Filipino currently residing in New York City, came home to hold his first solo exhibit in the Philippines from November 10 to 25 at Gallery Nine in SM Megamall.

Opening reception is on November 10 at 6 p.m.

Quizon, 40, was born and raised in Quezon City. At the age of 10, he and his family immigrated to Alabama in 1989. During his high school years, his art teachers introduced him to Picasso, Matisse and Dali. He was granted a Freshman Art Scholarship at the University of Alabama where he spent two years of college before moving to New York City.

Quizon graduated with a Bachelor of Arts degree in Studio Art in 2004 from Hunter College-City University of New York (CUNY).

Aside from being an artist, Quizon was an independent film director whose work was featured in a New York City area film festival. While freelancing as a graphic designer, he also found time to study and work as a web coder and designer.

All these experiences have found their way to his art works. Quizon's style has evolved with the use of digital tools to compose, process, and enlarge initial sketches to create unique handmade mixed media work.

Since 2000, Quizon has participated in several exhibitions and his works have been showcased recently at the Greenpoint Gallery in Brooklyn, New York.

In 2013, he returned to Manila and visited the Ayala Museum where National Artist Botong Francisco's "A Nation Imagined" was on display. This was Quizon's first genuine experience of Philippine art. He found Botong Francisco's work iconic and nationalistic. From then on, Quizon became more inspired to bring his own art to his country of birth.

With the unveiling of "Hypervisual" marking his introduction to the local art scene, Quizon hopes to visit the Philippines more often to further re-connect with his roots.