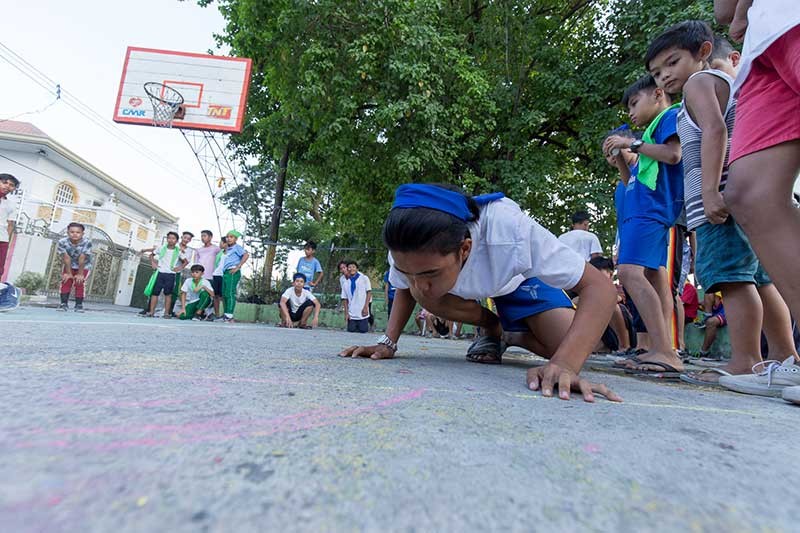 PAMPANGA. An Angeleño student blows an elastic band in a race against his opponents. This game called ‘Labulan Goma’ is one of the Kapampangan traditional games featured during Angeles City's Mamialung Tamu event held October 26 at the Estacion de Angeles (PNR) People's Park. (Contributed Photo)

ANGELES CITY -- Youth from various schools and villages in this highly-urbanized city participated in a series of day-long tournaments featuring traditional Kapampangan Games as the city government here staged the 2018 edition of “Mamialung Tamu!” (Let’s Play!)

The Angeles City Tourism Office (ACTO) in partnership with the Department of Education (DepEd) and the Angeles City Sports Office (ACSO) organized this year’s festivity at the Estacion de Angeles (PNR) People’s Park on October 26.

The event was attended by more than 50 children from the four school districts of Angeles City. Players wearing colored shirts representing the north, south, east and west school districts added to the festive mood of the activity.

Mayor Edgardo Pamintuan said that “Mamialung Tamu” was conceived to serve an avenue for the contemporary youth to grasp a first-hand experience of various age-old Kapampangan games.

“With Mamialung Tamu, we are embedding a mindset that there are a bunch of activities that our youth can enjoy aside from using their gadgets all day long. This also inculcates the sense of leadership, patience, and determination among competing teams which are important to the holistic development of our youth,” said Pamintuan.

Arsenia Ponce, marketing and tourism promotions head of ACTO, said that the event also aimed at reviving the Filipino culture and traditions among the youth. She also emphasized that the continuation of this event will assure the maintenance of the Indigenous Kapampangan games in the generations to come.

Meanwhile, Vice-Mayor Bryan Matthew Nepomuceno graced the occasion as the “Mamang Sorbetero” or ice cream man where he offered sorts of refreshments to the contingents. He then joined some of the traditional games and played with the participants.

“Having experienced our traditional games gives me bliss. This has been a tradition in Angeles City and I hope that our youth will continue in participating as it is intended for them. Rest assured that the city government will continue its programs that promote cultural heritage and activities that are pro-youth,” said Nepomuceno.

Also present during the event were Councilor Jericho Aguas and his wife JC Parker-Aguas, and Barangay Captain Alma Mercado of Tabun. Mamialung Tamu is one of the most celebrated sports event of the month-long Fiestang Kuliat in the city. (PR)