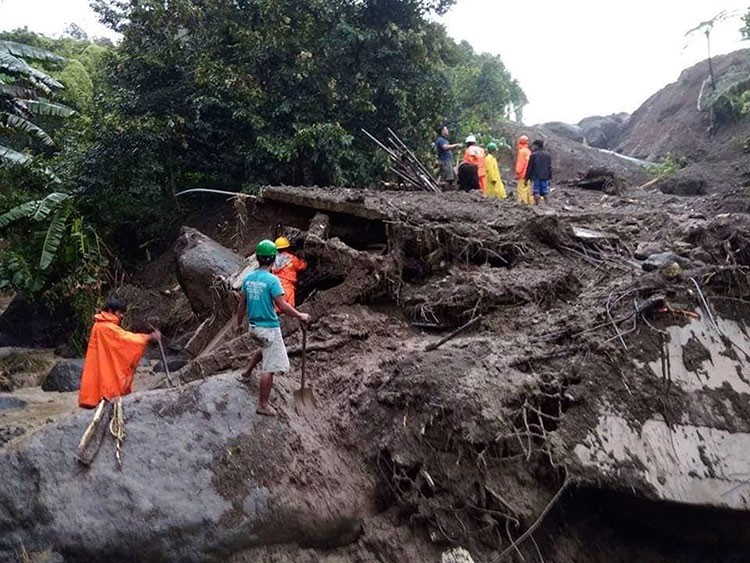 MOUNTAIN PROVINCE. In this image provided by the Department of Public Works and Highways-Mountain Province District Engineering Office, rescuers dig through the earth to search for survivors after a massive landslide in Natonin town in Mountain Province. (DPWH MPDSEO via AP)

AT LEAST three people were killed and scores remained missing after a massive landslide set off by Typhoon Rosita crashed down on a Department of Public Works and Highways (DPWH) building in Natonin, Mountain Province Tuesday afternoon, October 30.

Initial accounts by residents and responders revealed that there were 28 people working at the building when the landslide occurred. Twenty were laborers, one project engineer, two security guards, and five evacuees.

Engr. Jonel Emengga, chief of the DPWH-District 2 Planning and Design Division, said that according to eye witness account, the mountain across the DPWH building eroded around 4 p.m. Tuesday (October 30), swallowing the two-story concrete structure and washing away everything around it.

The DPWH office is located in Sitio Sakrang, Barangay Banawel in Natonin, Mountain Province. It was about two kilometers away from the town center.

Emengga said the building was supposed to be empty with only two guards on duty. It was reported, however, that the guards allowed some residents to seek refuge at the building as Typhoon Rosita (Yutu) was battering the province.

"We don't know yet how many people were actually at the site because we cannot contact the two guards on duty," he said.

"The building is beside a residential area and the strong rain and wind could have prompted residents to seek refuge at the (concrete) office," Emengga said in Ilocano.

Emengga said the building has more or less 200 square meters floor area with two stories already finished. At the back and beside it are buildings, which are also being constructed.

Fronting the building is a two-lane concrete highway located some eight meters from the base of the building.

"The landslide brought down a big volume of mud, leaving no traces of the DPWH compound," Emengga added.

“DPWH have asked the different contractors to help clear the roads from Paracellis going to Natonin and we have received information coming from the BFP (Bureau of Fire Protection) that they have recovered the body of Virgilio Roxas and one survivor Joventino Lamawen,” Chumawer said.

Presidential Communications Operations Office Assistant Secretary Anna Marie Banaag, in a radio interview over Radyo Pilipinas Baguio, said that as of Wednesday morning, October 31, the responders were forced to walk toward the landslide site because of several other major landslides along the road and several debris blocking the road.

“We were able to talk to one of the security guards who survived and based on his recollection, he noticed the incoming landslide while he was in the process of closing the gate of the building which forced him to take cover at a nearby sewerage,” said Banaag, a former mayor of the town.

OCD-Cordillera Director Ruben Carandang proceeded to the site together with operatives from the 54th Infantry Battalion and the Tactical Operations Group 1.

Responders at the site are those coming from the Natonin Municipal Police Office and the Bureau of Fire Protection, Mountain Province Provincial Police Office, the local government unit, and the Barlig and Paracellis BFP.

Typhoon Rosita weakened considerably from its earlier super typhoon status over the Pacific Ocean before slamming into Isabela province before dawn Tuesday, October 30. Aside from the landslides, it also knocked down trees and power posts and ripped roofs off houses and stores, officials said.

The storm weakened further as it blew across mountains and then barreled westward through provinces still recovering from the deaths and devastation wrought by Typhoon Ompong (Mangkhut) in mid-September.

Rosita blew out into the South China Sea later Tuesday and weakened into a storm, Philippine forecasters said.

One of the world's most disaster-prone countries, the Philippines is battered by about 20 typhoons and storms each year. It is also located in the Pacific "Ring of Fire," the arc of seismic faults around the Pacific Ocean where earthquakes and volcanic activity are common. (With AP/PNA/SunStar Baguio)