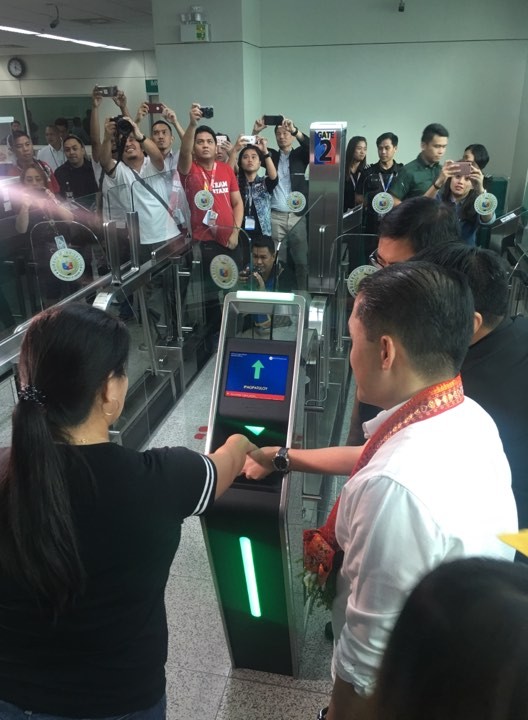 DAVAO. The Bureau of Immigration recently installed E-Gates at the Francisco Bangoy International Airport for faster processing of arrivals. (Photo by Gilford A. Doquila)

TO FACILITATE processing of the arrival clearance for Filipino passengers at the Francisco Bangoy International Airport (FBIA), the Bureau of Immigration (BI) launched the E-Gates on Wednesday, October 31.

BI FBIA terminal headquarter supervisor Eric Fernandez said the FBIA is the second airport in the Philippines to have E-Gates after the Ninoy Aquino International Airport (NAIA).

This also makes Davao City the first in Mindanao to have two E-Gates in serving the Filipino passengers.

(We are doing this as we expect Filipino arrivals to peak. This aims to fast-track the clearance of their passports.)

“So instead na mag-pass sila with the stamps sa mga personnel namin sa Bureau of Immigration, yung automated process will give a sticker dun sa passports pagdating nila sa Davao (So instead of them passing with the stamps from our personnel at the Bureau of Immigration, the automated process will give a sticker on the passports as they arrive in Davao),” Christine H. Tavarro, Immigration officer, said in an interview.

Fernandez said the newly launched E-Gates will streamline the arrival clearing processes for the passengers.

“From the 45-second transaction they have with the immigration officers, the E-Gates will only give Filipino passengers eight to ten seconds in transacting,” Fernandez said.

Fernandez added the E-Gates will serve only Filipino passengers for now.