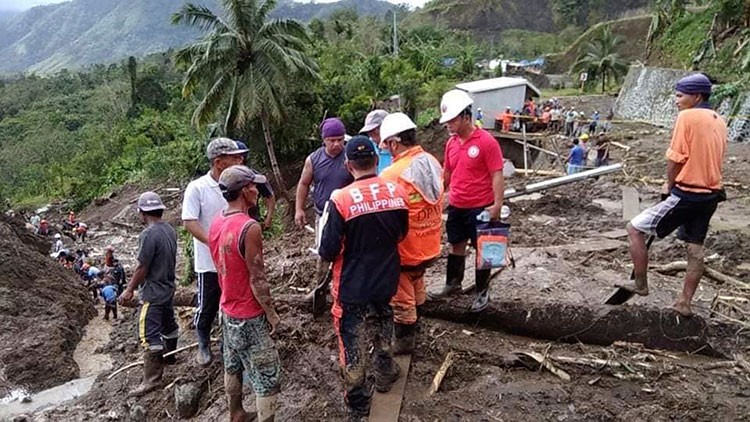 MOUNTAIN PROVINCE. In this image provided by the Department of Public Works and Highways-Mountain Province District Engineering Office, rescuers dig through the earth to search for survivors after a massive landslide in Natonin, Mountain Province, on October 31, 2018. (AP)

AT LEAST 15 persons were killed, three were injured, and six others remained missing after Typhoon Rosita (Yutu) made landfall in northeastern Philippines, said the National Disaster Risk Reduction and Management Council (NDRRMC) on Thursday, November 1.

Of the fatalities, 14 died in the landslides in Natonin in Mountain Province, Banaue in Ifugao, and in Tinglayan. The other one drowned in Abra.

NDRRMC Director Ricardo Jalad said the number of casualties is still expected to increase, as reports are still coming in from the local disaster risk reduction and management offices (DRRMO), particularly from areas affected by landslides.

On October 30, a landslide buried a Department of Public Works and Highways building in Natonin.

On October 31, Provincial DRRMO head Edward Chimawar said eight cadavers were recovered from the site, while at least 30 others are believed to have been trapped underneath.

The local police said though that five bodies were recovered, 14 others were rescued, and 10 to 18 people are still missing.

Search, rescue and retrieval operations in Natonin resumed Thursday morning, November 1, after it was temporarily suspended on Wednesday afternoon due to the debris from another landslide incident that blocked the roads leading to the landslide-hit DPWH building.

Meanwhile, the NDRRMC reported that a total of 30,734 families or 111,639 individuals were affected by the typhoon in over 1,000 barangays in Cagayan Valley, Ilocos Region, Central Luzon, Calabarzon, and Cordillera. Of which, 13,272 families or 50,846 persons were evacuated.

The council said a total of 901 houses were damaged, while 54 were destroyed.

The NDRRMC assured assistance for the affected population, citing the Department of Social Welfare and Development has distributed over P15 million worth of aid. (SunStar Philippines)