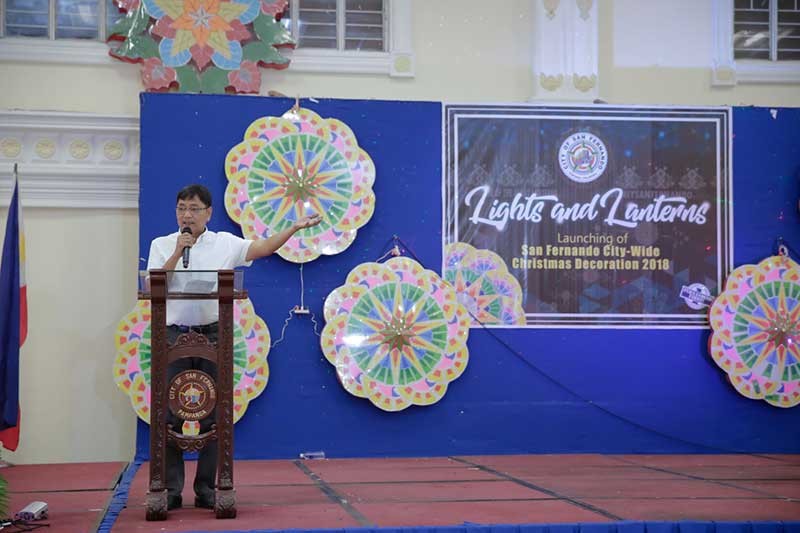 THE City Of San Fernando led the ceremonial lighting of Christmas lights and decorations all over the city on Tuesday, October 30 to signal the start of the Yuletide Season.

The lighting of the “Parol San Fernando” was the highlight of the activity as it lit up the Jose Abad Santos Avenue and Heroes Hall.

Mayor Edwin Santiago said the “parol” or Christmas lantern is a symbol of San Fernando as it gives color to the cultural excellence and investment stability of the city.

San Fernando, dubbed as the “Christmas capital of the Philippines” and “Home of the Giant Lanterns” has attracted local and foreign tourists because of the beautifully-crafted giant lanterns.

Santiago said one of the major factors why the city is being visited by local and international tourists is the city's rich cultural heritage.

"The lanterns are our culture and lantern-making is our industry -- when combined, we are not just doing culture promotion, we also expand our capacity in investment,” Santiago said.

Arvin Quiwa, a known Fernandino master lantern-maker who designed and made this year’s lights and lanterns, said that innovation is the key in making the “parol” notable now.

"The theme, 'lights and lanterns,' is part of the innovation of our designs, through the use of LED (light-emitting diode). Since we are now innovating, our ‘parols’ are growing and expanding in terms of market share," Quiwa added.

“I heard that they have been doing the activity for four years now and I am grateful for having the opportunity to witness it. I was amazed by the talents and creativity of Fernandinos, and I warmly congratulate the city government, of course, Mayor Santiago,” Angeles said.