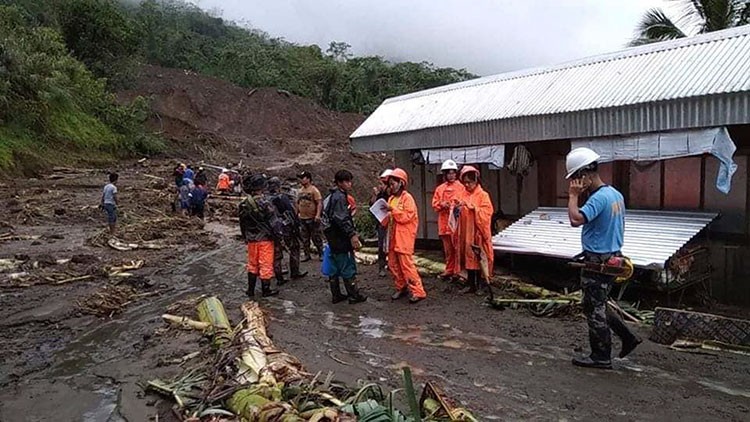 MOUNTAIN PROVINCE. In this image provided by the Department of Public Works and Highways-Mountain Province District Engineering Office, rescuers prepare to dig through the earth to search for survivors after a massive landslide, set off by Typhoon Rosita, crashed down on two government buildings in Natonin, Mountain Province, on October 30, 2018. (AP)

THREE members of the Citizens Armed Forces Geographical Unit (Cafgu) were among those killed in a landslide that hit two government buildings in Natonin town in Mountain Province on October 30.

Somera said the victims were members of the Cafgu Active Auxiliary (CAA) under Alpha Company of the Army's 77th Infantry Battalion in Ubao Patrol Base, Barangay Ubao, Aguinaldo, Ifugao.

Lieutenant Colonel Rembert Baylosis, commanding officer of the 77IB, said the victims were all on leave when the landslide happened.

"Our five CAAs went to work at the DPWH (Department of Public Works and Highways) project in the area as laborers and skilled workers to compensate their allowances as CAA because our Cafgu personnel only work for 15 days every month. For the remaining days, CAAs are free to earn additional income for their families," Baylosis said.

He said his troops were in the area to take part in the ongoing search, retrieval and rescue operations in the landslide site.

Mountain Province was among the areas hit by Typhoon Rosita (Yutu), which triggered the landslide on October 30.

The military said eight bodies were pulled from the mud, while at least 20 others are still missing. (SunStar Philippines)