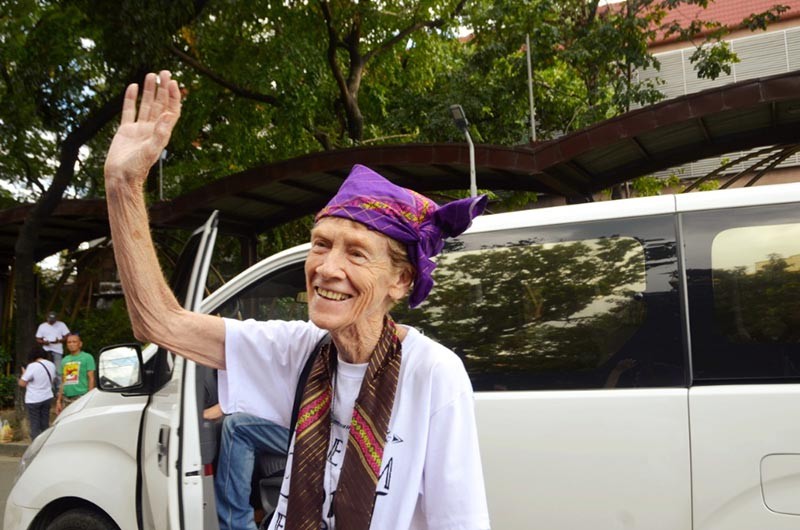 Fox left the Philippines for Australia on Saturday night, immigration officials said. The Bureau of Immigration ordered her deported in July, put her on a blacklist and then downgraded her missionary visa to a temporary visitor's visa, which expired Saturday.

President Rodrigo Duterte has bristled at criticism of his leadership, particularly by foreigners like Fox, who he says have no right to meddle in the country’s domestic affairs. Most of the criticism has focused on his bloody anti-drug campaign, which has left thousands dead, alarmed Western governments and rights groups and prompted two complaints of mass murder before the International Criminal Court.

During a farewell news conference in a Catholic school before leaving for the Manila airport with a convoy of supporters, the 71-year-old Fox called on Filipinos to speak up and help the marginalized fight to gain land, houses and jobs.

“The big challenge now is not to lose hope, to know that if we all move together, we can bring about change,” Fox said.

“Pope Francis said that if you're a Christian and there's massive human rights violations ... you should take action, make noise. Where the oppressed are, the church people should be there, not only always talking but with them and hopefully more vocal,” she said.

Fox told The Associated Press separately by phone that Duterte's anti-drug crackdown was “horribly barbaric” and she vowed to return to the country if allowed to resume her 27 years of missionary work for the poor.

“I know a lot of mothers, wives who have lost someone. You have no right to take a life just like that without justice,” Fox said.

Dozens of activists, laborers, priests, nuns and tribal folk, some in tears, thanked Fox by celebrating a mass in her honor before sending her off to the airport. A lawyers group backing Fox, the National Union of Peoples' Lawyers, said that by persecuting a frail and low-key missionary, Duterte has turned her into an “overnight rock star.”

Known for being soft-spoken, Fox is a coordinator of a Roman Catholic order of nuns and has worked for the poor in the Philippines. She promotes human rights and the welfare of workers, farmers and ethnic groups and has spoken against Duterte and his government, which has also been criticized for stifling dissent.

The immigration bureau said Fox violated her missionary visa by venturing far beyond her community in Quezon City, Manila and interfered in domestic politics by joining protests and news conferences that tackled “political and human rights issues against the government.”

Fox's lawyers said she joined the marginalized as part of her missionary work and called the Duterte administration's actions “political persecution.” They expressed fears that the move to evict Fox could undermine the crucial civic and religious work of foreign missionaries in the country.

Aside from Fox, the government has separately blocked a critical Italian politician, Giacomo Filibeck, and another Australian, Gill Hale Boehringer, from entering the Philippines this year.

“The law is clear: The entry and admission of an alien is a matter of privilege, and not a right,” Bureau of Immigration spokeswoman Dana Sandoval said Saturday.

In a statement, CBCP-Episcopal Commission on Mission chairman Bishop Arturo Bastes said they appreciate the service given by Fox in her 27 years in the Philippines as a missionary.

“Sister, I would like to express my gratitude in the name of all the Filipinos, especially of the fellow missionaries like me, for having sacrificed and sharing your life with us for many, many years,” said Bastes.

He said they just have to contend with the idea that Fox’s case could raise more awareness on the importance of missionaries as well as the response of the government to critics.

“Sister, despite the fact that you are suffering, take it as another challenge that your persecution by the government will get down to the glory of God and can make people more and more aware of what is really wrong and what is right, to make the people more aware what is, on who is undesirable or desirable alien,” said Bastes. (AP with HDT/SunStar Philippines)