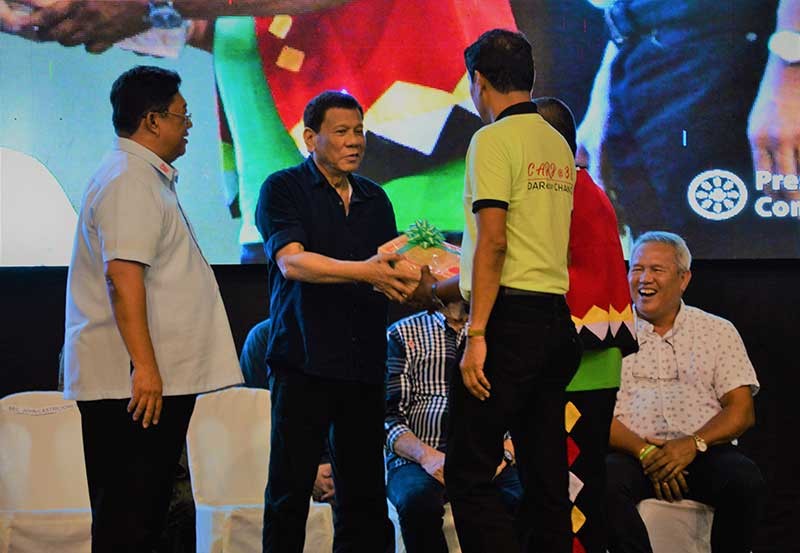 PRESIDENT Rodrigo Duterte once again slammed the communist New People’s Army (NPA) and warned them against occupying idle lands while he handed out Certificates of Land Ownership Award (CLOAs) to former communist rebels and Moro fighters.

In his speech, Duterte ordered Agrarian Reform Secretary John Castriciones to prioritize the distribution of lands under the Comprehensive Agrarian Reform Program (CARP) on Negros islands and elsewhere in the country.

“I told him to give everything up for land reform there in Bacolod. For the beneficiaries who were unable to benefit from it, I ordered Secretary Castriciones to give it away. But don’t steal and kill people because if you do, my order to the police and the military is to have you evicted,” the President cautioned.

The President also warned the NPA not to occupy government and private properties forcibly.

“Do not confiscate or seize or occupy the lands that are already owned. Don’t do that. Don’t steal lands that already have tenants,” he said.

“Let’s talk. I’ll give you land. What will I do with those anyway? It’s not mine. I told Secretary [Castriciones] to distribute government-owned lands tomorrow...the lands that weren’t included as reservation for schools,” he said.

The President issued the warning to the communist combatants around two weeks after nine farmers were massacred in Sagay City, Negros Occidental.

Unidentified armed men shot at the farmers, who were among the participants of "Bungkalan", a campaign by militant groups to occupy and till idle lands covered by the agrarian reform program, in Hacienda Nene in Barangay Bulanon, Sagay City on October 20.

Duterte said he would give the lands to qualified beneficiaries, but told them it cannot be done overnight and that there was no need for forcible occupation of such properties.

“Just wait because I can’t speed things up,” he said.

He also ordered the military and police to arrest the communist groups and their allied groups and bring them to the police station if they resist the arrest orders violently.

Among the five provinces in Northern Mindanao, Lanao del Norte has the most number of ARBs with 1,807, 664 collective beneficiaries and 1,143 individuals.

Lanao del Norte has a total of 3,856.8945 hectares covered by the agrarian reform program in the municipalities of Nunungan, Sapad, and Munai.

In Gingoog City, a component city in Misamis Oriental, about 283 hectares were to be given out to former NPA members who have organized themselves into Tagpako Farmers’ Cooperative.