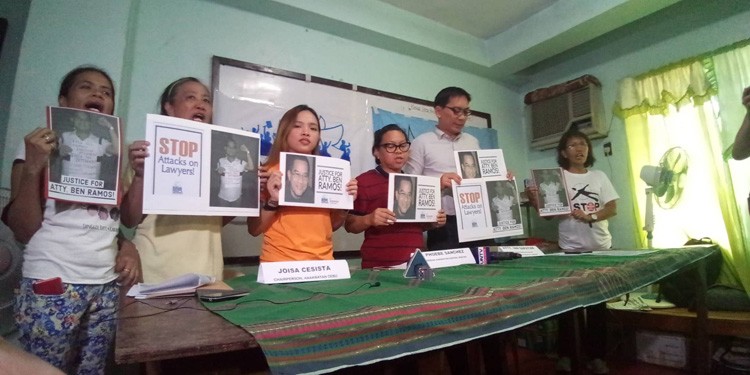 AN OFFICIAL of the National Union of People's Lawyers (NUPL) said Wednesday, November 7, that the government was behind the killing of human rights lawyer Benjamin Ramos.

Lawyer Mundlyn Misal-Martin, Integrated Bar of the Philippines (IBP) Cebu Chapter president, described the murder of Ramos as an "act against the legal profession as a whole."

"We cry for justice for the death of another brother in the legal profession. Killing another lawyer is an inhumane act, unworthy in a civilized nation where democracy should rule," she said. "We cannot fathom the reason behind as to why, a lawyer whose noble cause in society has led to his unjustifiable demise."

Ramos, NUPL-Negros Occidental secretary general, was smoking by a store in Barangay 5, near the public plaza of Kabankalan City when he was shot by motorcycle-riding gunmen around 10:20 p.m. Tuesday, November 6.

Sapayan, for his part, urged authorities to conduct a thorough investigation on Ramos's murder.

Last April, a poster with pictures of persons with links to the communists were reportedly circulated by the police in Negros Occidental.

"These beastly attacks by treacherous cowards cannot go on. Not a few of our members have been attacked and killed before while literally practicing their profession and advocacies in the courts, in rallies, in picket lines, in urban poor communities, and in fact-finding missions," NUPL's press statement read.

Sapayan was with Ramos three weeks ago, attending a hearing on charges against the Mabinay 6, the youth activists accused by the military of being members of the New People's Army (NPA).

Sapayan said they plan to petition the Supreme Court to transfer the hearing on Mabinay 6 from Bais City, Negros Occidental to Cebu City for fear of the youth activists' safety. The trial started three weeks ago.

He said they filed a motion to allow the Mabinay 6 to post bail.

Sapayan said Ramos was set to cross-examine the final witness on November 21.

He admitted that they fear for their lives, saying they are only doing their job defending their clients.

The NUPL and its key officers also said in a press statement that they have been "labeled and branded pejoratively by the police, military, vigilantes, some bigoted columnists, and online trolls, in open contempt of basic principles of the role of lawyers in society."