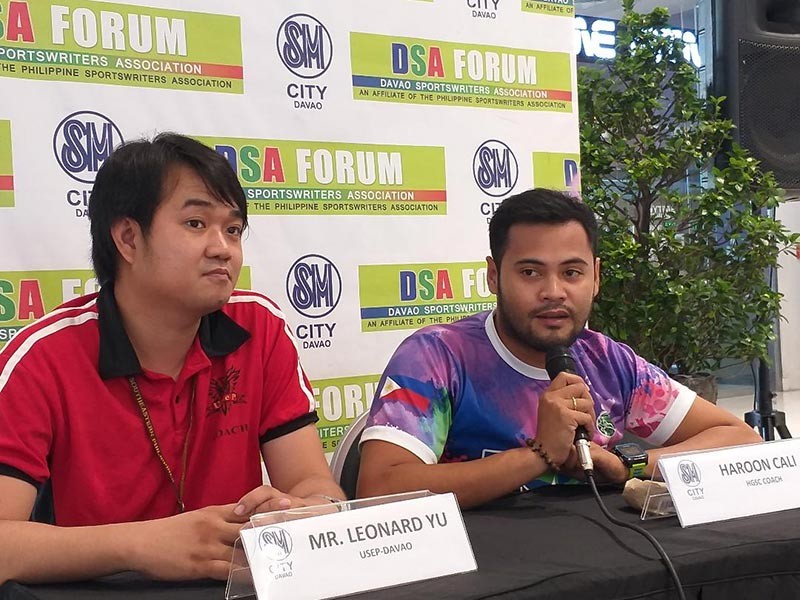 NOT EMPTY. Davao City tankers-bannered Mindanao-Philippines swimming team head coach Haroon Cali, among the guests during the Davao Sportswriters Association (DSA) Forum on Thursday, November 8, at The Annex of SM City Davao, assures that they will not come home empty-handed from the 10th BIMPNT-Eaga Friendship Games set in Brunei Darrusalam next month. (Marianne Saberon-Abalayan)

DAVAO City's 20-member swimming team that will represent Mindanao-Philippines to the 10th BIMPNT-Eaga Friendship Games set in Brunei Darrusalam next month are mostly young but competitive.

Holiday Gym Swimming Club coach Haroon Cali, who will mentor the city's tankers, said he used to also compete in the biennial meet but it would be his first time to coach a city team in the BIMPNT-Eaga Games designed for 21-under athletes.

He said that it would be unlikely for the swimming team to return home empty-handed. "Dili man pud siguro ta ma-zero sa gold (I don't think we would be zero in gold)," he said, adding that the swimmers were selected based on their impressive performances in national and international competitions like the Palarong Pambansa, National Prisaa Games, Batang Pinoy and Scuaa Meet, among others.

Ten male and 10 female tankers will comprise the swimming contingent.

Cali, however, said that due to the lack of an Olympic-sized swimming pool in Davao City, most of the swimmers usually train at the Davao del Norte Sports Tourism Complex in Tagum City.

He also said, "After the Grand Prix Mindanao leg last weekend, the swimmers had a cool down for a few days. We will resume training and will train six times a week in preparation for the BIMPNT-Eaga Games."

Athletics, sepak takraw, wushu, taekwondo and karate are also featured in the Games that will be participated in by Brunei, Indonesia, Malaysia, Philippines and Northern Territory, Australia.