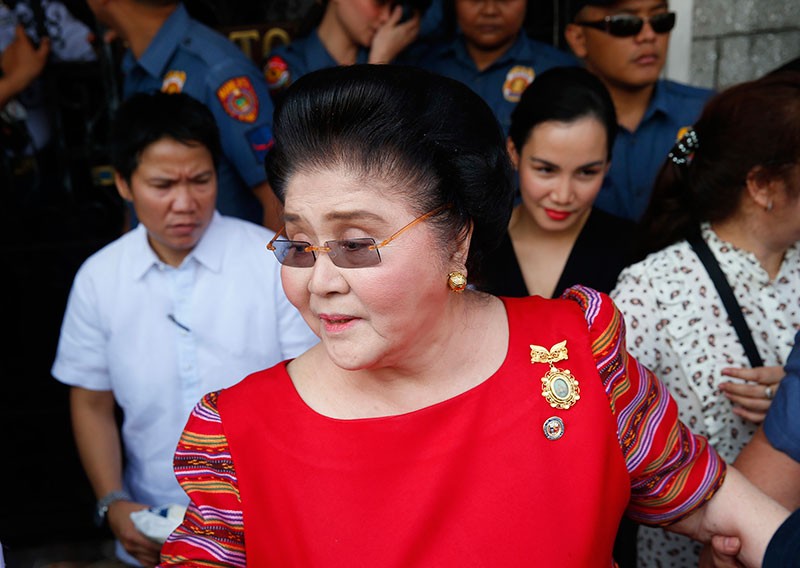 MANILA. In this Oct. 16, 2018, file photo, former first lady and widow of the late dictator Ferdinand Marcos, Representative Imelda Marcos arrives at the Commission on Elections to lend her support for her daughter Governor Imee Marcos in filing her Certificate of Candidacy or COC for a Senate seat in the May 2019 midterm elections. (AP File Photo)

FORMER first lady and current Ilocos Norte Representative Imelda Marcos will ask the Sandiganbayan to reconsider its decision which found her guilty of seven counts of graft.

He has advised Marcos, however, that he intends to file a motion for reconsideration.

Lazaro acts as counsel for Marcos in the absence of Robert Sison, who "has been indisposed and is presently confined at the Asian Hospital."

Marcos, 89-year-old widow of the late strongman Ferdinand Marcos, said she received Friday a copy of the Sandiganbayan 5th Division's decision, which was promulgated earlier Friday.

Presidential Spokesperson Salvador Panelo said the ruling merely demonstrates that the country's justice system "is working and favors no one".

"While we note that there are still legal remedies available to Congresswoman Marcos, this latest development underscores that our country currently has a working and impartial justice system that favors no one," Presidential Spokesperson Salvador said in a statement.

Marcos was the minister of Human Settlements, Metro Manila governor, and a member of the Interim Batasang Pambansa during her husband's dictatorship from 1965 to 1986.

Nearly three decades after the Office of the Ombudsman filed 10 graft cases against her, the Sandiganbayan found her guilty of seven counts of graft for using her Cabinet position to maintain Swiss bank accounts.

She was sentenced to imprisonment of six years and one month to 11 years for each count of graft. She was acquitted of the three other counts of graft.

Marcos, who is running for Ilocos Norte governor in the 2019 midterm elections, was also perpetually disqualified from public office.

Panelo said the court's decision was proof that the Duterte government does not meddle "in the affairs of another separate and independent branch of the government."

"The Executive Branch is not in the business of exerting undue interference or influence in the affairs of another separate and independent branch of the government," he said.

"As such, we manifest our respect to the decision of the Sandiganbayan finding former First Lady and incumbent Ilocos Norte Representative Imelda Marcos guilty of the seven out of the ten cases filed against her," the Palace official added.

The Marcos family has been accused of stashing around $10 billion in hidden bank accounts overseas.

In September 2017, President Rodrigo Duterte raised the possibility of granting the Marcos family limmunity from criminal prosecution in exchange for the return of part of their hidden wealth.

Panelo said the ruling against the Ilocos lawmaker should encourage all workers in government to maintain their "professionalism, fidelity, and integrity" in serving the public.

"We treat this decision by the anti-graft court as a good reminder to all public servants that public office is a public trust and that we are all accountable to the people we serve," he said.

"As servants of the people, we must therefore carry out our duties not only with professionalism and fidelity but most importantly, with integrity," he added.

Left-leaning lawmakers, for their part, welcomed the decision of the Sandiganbayan.

"It is lady justice catching up with history. The decision is a welcome relief and mitigates the pain of the past. But only a full and voluntary acknowledgment by the Marcoses of their deeds can we say that closure is coming,” said Akbayan Representative Tom Villarin in a statement on Friday.

Party-list Bayan Muna said “the jail has long been waiting for her (Imelda) and her cronies.”

Bayan Muna Rep. Carlos Zarate said the Sandiganbayan ruling puts to rest the Marcos family's contention that they have not amassed ill-gotten wealth during the dictatorship.

"Many would be happy with this decision but it would be better if the Marcoses also return all their ill-gotten wealth to the Filipino people," ended Zarate.

ACT Teachers Rep. Antonio Tinio, said the verdict of the anti-graft court shows how Marcos can be held accountable for her role in the “worst” plunder in the nation's history. (SunStar Philippines)