Special Report: Technology, barricades to save Cebuanos during storms (Part 3) 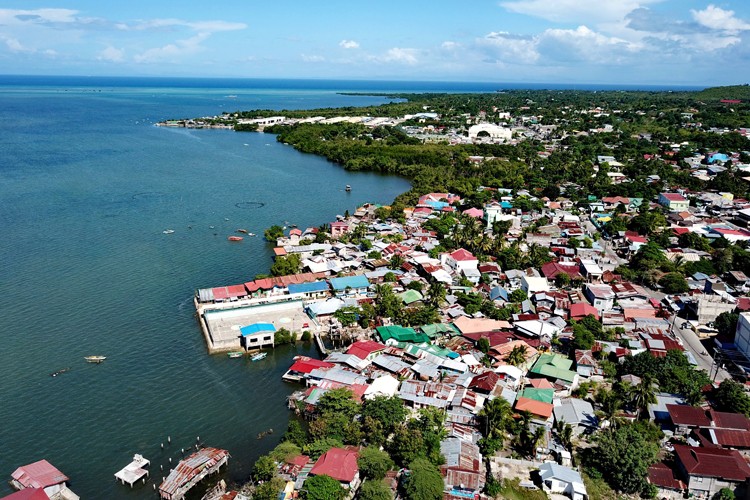 Living on the edge. Houses in Barangays San Vicente, Sambag, Gairan and Sto. Niño lie on the coast in Bogo City, exposing their residents to the risk of storm surge during typhoons. (SunStar Foto / Allan Cuizon) 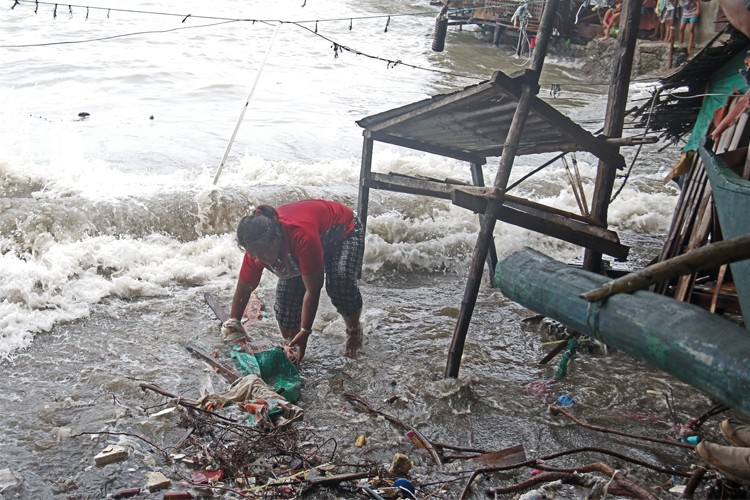 WHEN it struck the Visayas five years ago, super typhoon Yolanda not only brought death and devastation, it also brought changes in governance, particularly when it comes to disaster preparedness.

Each barangay has now been capacitated, down to the purok level, in disaster risk reduction and management ahead of calamities.

Officers have been trained in evacuation procedures and using an early warning system so that “di magkagubot pareha sa (there will be no chaos like during) Yolanda.”

Yolanda (Haiyan) killed at least 16 people in northern Cebu, where it also nearly wiped out town halls, schools and houses.

Of Medellin’s 19 barangays, 14 are in the coastline.

“They are really prone to storm surge,” Villamor said, “while the other five barangays are prone to moderate flooding.”

Villamor said “shelter houses” had been identified in every barangay, and that each family already knew which family it should go to during calamities.

“Shelter houses would decongest government facilities, like schools, of evacuees. If they don’t transfer to the shelter houses, they won’t receive relief goods,” she said.

The family that owns the shelter house will also receive relief goods.

In Madridejos, MDRRMO head Jessie Estillore said its “Automatic Weather Station” donated by the Lutheran World Relief in partnership with Tambuyog Development Center now allows them to measure locally wind speeds and rainfall in millimeters, so they can give a 10-day weather forecast.

Then when the weather disturbance comes, the town uses sirens.

“A one-minute blast is a signal to prepare for evacuation. The next time, the blast will already be two minutes, when you’ll have to leave the house already and transfer to the designated evacuation centers. With the three-minute blast, no one should be left in the house anymore,” he said.

“Because of Yolanda, Cebu’s local government units (LGUs) not only have their own DRRM offices, but LGUs set aside budgets for the hiring of personnel, training and even heavy equipment,” he said.

When the PDRRMO was created through a provincial ordinance a year after Yolanda, it was tasked to not only prepare for disasters but also train other LGUs in disaster preparedness, research and documentation; statistics and planning; rehabilitation and reconstruction; and emergency response and search and rescue.

The PDRRMO, through the Provincial Government, also spent billions of pesos to acquire new equipment and vehicles, some of which were donated to LGUs to help in their disaster response. This year, the PDRRMO has a budget of P181 million to help fund disaster response programs for the LGUs.

It has also institutionalized DRRM by including it in the “Our Cebu” scorecard program, which provides yearly incentives to LGUs.

But much still has to be done to improve LGUs’ disaster preparedness. Tribunalo said at least 15 LGUs have DRRM offices led by designated officers only, not plantilla personnel. Some LGUs also have fewer than the 15 emergency responders that the PDRRMO requires.

In Bogo City where, in the words of its then mayor, Celestino “Junie” Martinez Jr., Yolanda “practically destroyed everything we have here, from infrastructure to agriculture,” the experience paved the way for the creation of the “Family DRRM” program.

Barangays are required to teach families to create their plans and do house-to-house risk assessment to identify dangers within the area.

Because of the program, the Bogo City government was awarded the Regional Gawad Kalasag by the Regional Disaster Risk Reduction and Management Council last year. And the Department of the Interior and Local Government has endorsed the Family DRRM for replication nationwide.

Despite their efforts to make the city disaster-resilient, Saberon admits there are still some residents who prefer to live in danger zones, particularly in coastal barangays.

Saberon said residents continued to live in coastal areas in Barangays Don Pedro, Pulangbato, La Purisima Concepcion, San Vicente, Santo Rosario, Sambag, Gairan, Mailon, Siocon, Marangob and Udlot. Most of these were residents who had already been relocated to safer ground but chose to return to their old areas.

Saberon said some of them refused to leave their old homes despite the danger because of their proximity to their fishing grounds.

In Medellin, Villamor said the town is in the process of relocating the people in hazard zones.

“The National Housing Authority (NHA) is now in the third phase of its construction of Yolanda housing,” she said. Some 631 of the 1,200 houses allocated for Medellin have been completed.

She said while most residents occupied the houses given to them, sometimes the heads of the families, mostly fishermen, returned to their old houses by the coast, as these had not been demolished.

Estillore of Madridejos said that in 2015, over 800 households were within the 20-meter easement considered a danger zone.

“We have no new data yet (on the families that remain there today) because some were already relocated to housing provided by two private groups: the Red Cross and Caritas,” he said.

Estillore said the houses the NHA was tasked to build for the town were still under construction. Of the 3,693 houses the agency allocated for Madridejos, only 16 so far are currently being built.

It was the same story in Daanbantayan, where MDRRMO head Victor D’osep Tancawan said some families living in the town’s 15 coastal barangays had transferred to four housing developments in the area: one currently being developed by the NHA, and in the developments of Cemex, Habitat of Lafarge and the Red Cross Village.

“Some of those who were transferred to the Red Cross Village returned to their houses by the coast. They stay there some days of the week,” said Tancawan, who estimated the resettlement site to be 500 meters to a kilometer from their old houses.

The NHA allocated 4,363 houses for building in the town.

The NHA was tasked to build 22,423 homes for victims of typhoon Yolanda in 15 towns and one city in northern Cebu.

In Santa Fe, MDRRMO head Leah Escarlan said not all the people they plan to relocate to 2,305 houses to be built by the NHA are those living in danger zones.

“The priority is those living in the 20-meter zone, or 20 meters from the high tide. But in the DRRMO, when we identify unsafe zones, we use 40 meters (as the guideline),” Escarlan said. “The 2,305 will include those whose houses were totally damaged by Yolanda, those in the 40-meter zone, those who are indigent and those whose houses are made of light materials.”

Article 51 of the Water Code of the Philippines states that: “The banks of rivers and streams and the shores of the seas and lakes throughout their entire length and within a zone of three meters in urban areas, 20 meters in agricultural areas and 40 meters in forest areas, along their margins are subject to the easement of public use in the interest of recreation, navigation, floatage, fishing and salvage.”

There was already a ceremonial turnover of the NHA houses to an initial 150 beneficiaries, but these beneficiaries have not moved to the new houses yet, Escarlan said.

Amid the difficulty in getting people to relocate, and also to protect property, some cities and towns have resorted to building or fortifying existing barricades, such as seawalls and mangroves.

In Carmen town, the coastal barangays of Dawis Norte and Dawis Sur are protected by mangroves that engineer Roger Suico of the MDRRMO said had been there for “almost 100 years.”

The about 20-meter-wide mangroves run the length of the two barangays, he said.

“Only Barangay Luyang is storm surge-prone because it has a beach,” he said. “But they have done structural mitigation as part of its flood control program.”

Suico said the Department of Public Works and Highways put up a half-a-kilometer riprap to protect the area against floods in 2015. In 2016, the riprap was extended by 300 meters, so that it now goes “all the way to the mountain.”

In Daanbantayan, Tancawan said one-meter-high ripraps in about five to six barangays had broken down over the years, and there were plans to repair them. After Yolanda, new seawalls were also proposed but did not materialize.

But he said the old six-foot seawall in Barangay Poblacion currently protects the municipal hall.

In Santa Fe, Escarlan said the town plants mangroves yearly to add to the mangroves already established in three barangays: Maricaban, Balidbid and a portion of Okoy. And it plants trees in beaches.

She said the University of San Carlos, the Department of Science and Technology and other agencies were also studying the possibility of building a breakwater in the town.

In Madridejos, the plan to cover its 11 coastal barangays with a seawall has resulted in the wall rising in seven barangays so far. But Estillore said there were breaks (“putol-putol”) in the seawall “because there are areas with houses,” showing the encroachment of structures on shorelines.

In the more densely populated Danao City in Central Cebu, not badly hit by Yolanda but named as a storm surge area by the Philippine Atmospheric, Geophysical and Astronomical Services Administration, local officials are using the twin approaches of relocation and fortification.

“There’s even a mangrove park there, but the bridge now needs to be renovated. It’s the livelihood of the fishermen’s association. They are the ones propagating the mangroves. And for their corporate social responsibility, some companies plant mangroves there,” Reyes said.

He estimated that there were 180 households in danger zones in Barangays Guinsay, Taytay and Looc. They are now working to relocate these.

“Republic Cement donated a lot for the relocation of people in danger zones. We are just waiting for the memorandum of agreement (MOA). The one who donated it before was Lafarge, but Republic Cement bought Lafarge, so a change of name is needed,” he said.

Under the MOA, the government will develop the area in Guinsay, while Gawad Kalinga will build the shelter. The lot is almost two hectares and can accommodate 100–150 households, he said.

There is a seawall in Barangay Poblacion, where the government center is, and where the church is exposed to the sea, but none in Looc, where they want to retain the natural coastline because there is a public beach there, Reyes said.

In Talisay City, a 527-meter seawall built before 2009 protects some parts of Barangays Poblacion and Dumlog.

Barangay Poblacion administrator and former councilor Gabriel Bonjoc said that before the construction of the seawall, they often conducted preemptive evacuation in three sitios—Litmon, Mahayahay and Kalibuhan—as most of the houses near the coast were often battered by huge waves brought by typhoons or by the yearly “habagat” or northwest monsoon winds.

More than 100 homes stand behind the seawall in Poblacion. When Typhoon Yolanda struck in 2013, the seawall was the first line of defense for residents there, Bonjoc said.

But seawalls can only do so much. And typhoons wreak havoc not only near waterways.

“We need a climate change action plan to minimize the effects of climate change,” said Sta. Fe’s Escarlan. “Climate change can cause disasters. It makes weather unpredictable. The rain is excessive now.”

In this age of the “new normal,” when storms have become stronger and deviated from traditional paths, the experience of Madridejos should serve as fair warning.

Estillore said they saw a need to build their seawall because in Barangay Tarong, “ang roads, nakan-an na sa dagat. (The ocean now engulfs the roads during storms).”