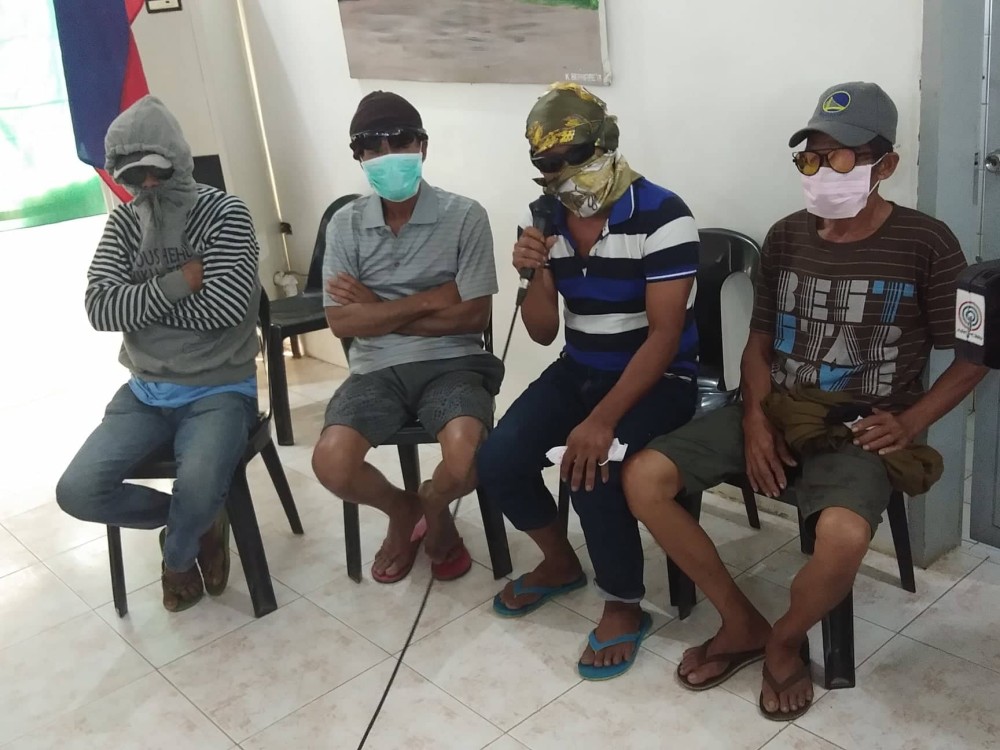 SAGAY. The four former members of the New People's Army (NPA) in their first public appearance at Balay Kauswagan in Sagay City, Negros Occidental. They were tagged in the killing of the nine farmers. (Glazyl Masculino)

They showed up on Friday, November 9, during a press briefing at Balay Kauswagan here to clear their names after they were named by Ka Frank of the National Democratic Front (NDF)-Negros as the alleged perpetrators behind the murder of the farmers at Bulanon village on October 20.

The NDF also alleged they were former members of the Revolutionary Proletarian Army (RPA), which was vehemently denied by the former rebels.

Two of them are active members of the Civilian Armed Forces Geographical Unit (Cafgu) who were brought by military troops to the police for investigation while two others asked for police assistance and subjected themselves to the authorities for the same purpose.

The former rebels, whose identities were withheld for security reasons, told the media they have nothing to do with the Sagay massacre because they were not present when the incident happened.

One of them said: “The victims must have been familiar with the ones who killed them. Why us? How could we approach the area when everyone knows it is thick with recruiters of the National Federation of Sugar Workers (NFSW) and a hangout for the NPA?”

The other one said: “We know how the NPA work.”

“We don’t know anything about the case,” they all said, adding they even do not know each other when they met at the police station.

We do not even know the landowner and we haven’t gone to that place, one of them said.

They said the real motive of the rebel group is to let them surface so they can locate and kill them, as they cited threats they received through text messages. Their families were also threatened.

They said they are also being targeted by the rebels because they left the group and chose to return to the fold of law.

Also, they said they are being hunted by the armed group because they knew about the latter’s revolutionary movement.

“Nag halin kami sa grupo tungod wala na kami ka intsindi sang ila nga gina himo (We left the group because we already do not understand their actions),” one of them said.

One of them even told the press that his two brothers were allegedly killed by the rebels and he even survived the previous attack of the group against him.

One of them said he can attest the NFSW is linked with the NPA since he started as its member and quickly became part of the armed group.

Meanwhile, Colonel Benedict Arevalo, commanding officer of the 303rd Infantry Battalion of the Philippine Army, said “this is the irony of the story. Who is acting as the complainant of the four? Because here are the families of the slain farmers and they are not the ones making accusations against the four? Instead, they point to the NFSW and NPA as the killers.”

Arevalo said they (rebel returnees) became frustrated and left the movement because the Special Partisan Unit (Sparu) of NPA has tried to kill them several times.

This is the problem when there is a cover-up on the real events, he added. “This is a blatant lie.”

This is Communist Party of the Philippines (CPP)-NPA-NDF covering-up their strategy of agitating the people that went bad, he said.

If they are asking for a Senate investigation on the Sagay incident, I fully support that as soon as possible to know the truth, Arevalo said.

The four former rebels are now under police custody for safekeeping.

New development on the case will be released soon by the Special Investigation Task Group which is focusing on the matter, he added.

Mansueto reiterated that they are still looking to three angles on the case – the NPA involvement, land owner's private armed groups, and land dispute.

But he said they are close to finding out more information since multiple murder charges were already filed against two NFSW members and seven John does.

As to the minor-witness, Mansueto said there was an agreement between the mother and the City Social Welfare and Development (CSWD) that the 14-year-old boy, who has a first-hand information about the incident, will be brought to the province anytime if he is needed for the investigation.

But as of now, they are reportedly in Manila after they were allegedly taken into custody by Karapatan-Negros.