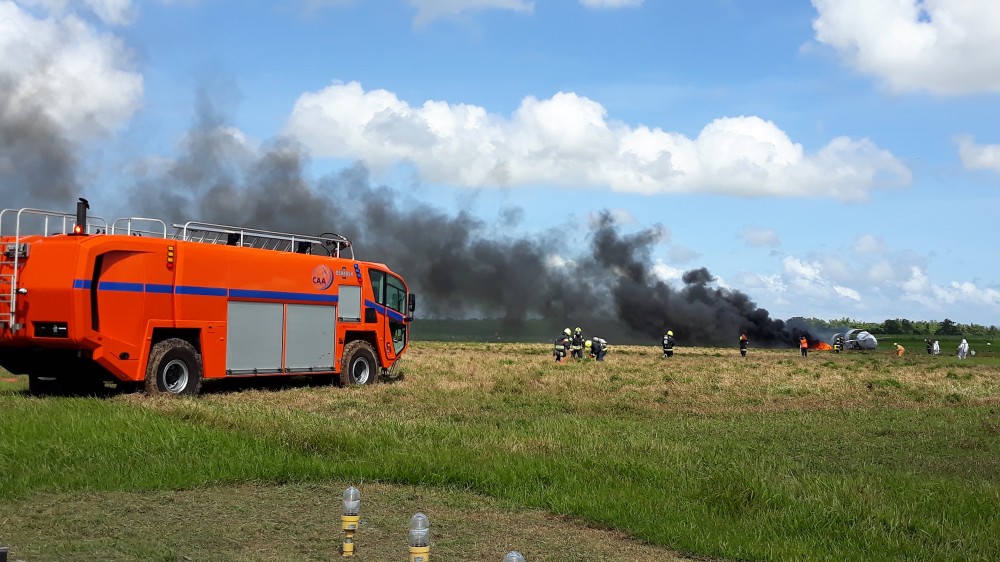 BACOLOD. Firefighters put out the fire of this dummy plane during the full scale emergency exercise at the Bacolod-Silay Airport on Friday. (Marchel Espina)

SILAY CITY -- The Civil Aviation Authorities of the Philippines (CAAP) in cooperation with the various government agencies and rescue groups and responders staged a full scale emergency exercise and drill at the Bacolod-Silay airport grounds to test their readiness and capability during an emergency.

CAAP Bacolod administrative officer and public information officer Ofelia Leonardo said on Friday, November 9 the simulation activity is being required so they can obtain the needed certification from the International Civil Aviation Organization for the airlines to fly to other destinations abroad.

They had a scenario for the simulation using an Airbus A320 with 100 passengers including five airline crew on board.

The “victims” were injured while some of them even died during the “plane crash.”

Those severely injured passengers were brought to the hospital as part of the drill.

They also tagged the passengers based on priority status. Those who had red tags were considered severely injured; the yellow tags, slightly injured; and black for those who died.

Those who can still walk were brought to the confines of the Department of Social Welfare and Development for debriefing.

With the simulation exercise, some flights which scheduled on Friday morning were cancelled and delayed.

The airport caters to 52 flights a day, Leonardo said.

Leonardo also pointed out the statement of airport manager Martin Terre that it is better to look ahead and plan than look back and regret.

Local government agencies like Silay, Talisay and Bacolod and the provincial government were involved in the emergency response team including non-government organizations and volunteers.

After the drill, Leonardo said they will assess the execution of the emergency response plan to determine if it has followed the airport emergency manual.