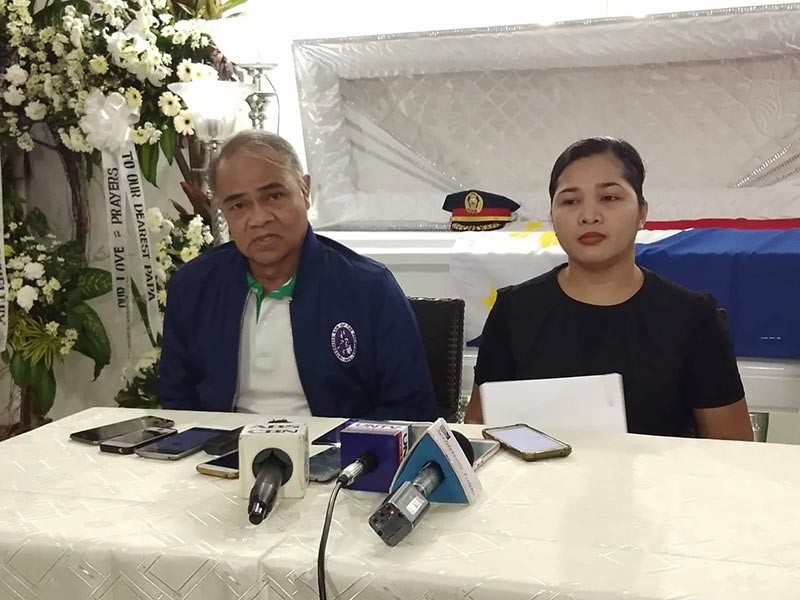 BACOLOD. Michelle Rapiz, along with legal counsel Tranquilino Gale, in a press conference at the Rolling Hills Memorial Chapel, where the late superintendent Santiago Rapiz lies in state, on Saturday, November 10.

THE wife of the slain "narco-cop" from Negros Occidental is calling on President Rodrigo Duterte, senators, and congressmen to conduct an investigation on the death of her husband who was killed in a drug bust in Dipolog City, Zamboanga Del Norte last week.

Michelle Rapiz, along with legal counsel Tranquilino Gale, held a press conference at the Rolling Hills Memorial Chapel, where the late Superintendent Santiago Rapiz lies in state, on Saturday, November 10.

"I am personally asking the President, senators, and congressmen to conduct an inquiry to investigate the death of my husband," Michelle said.

Earlier, Duterte hailed the killing of Rapiz, who was reportedly included in the President's drug list. He was even planning to give a reward to any policeman who will kill their superior who is involved in illegal drugs.

During the press briefing, Michelle questioned the anti-drug operation led by the Counter-Intelligence Task Force (CITF) of the Philippine National Police (PNP), Philippine Drug Enforcement Agency (PDEA), and other PNP members in front of Andres Bonifacio College gymnasium on November 6.

"I will explain the deception and lies that the police made against my husband," Michelle told the media, as she believed her husband was not given due process.

"Based on the photos, my husband was half-naked, wearing jersey shorts, and just came out of the gymnasium after finishing a basketball game when the alleged buy-bust operation happened," she said.

Michelle said in the vernacular, "no buy-bust happened because after they committed the betrayal, the lights in the area suddenly went off and my husband was already lying on the grass, dead."

She added that her husband was rushed to a hospital after one hour.

"They really made sure my husband was dead when they brought him to the hospital," she added.

Michelle also denied the allegation of the police that 25 grams of drugs were recovered from her husband's pick-up vehicle, saying the drugs were just planted.

Michelle also asked the authorities to return her husband's wallet, cellular phone, and other valuables, which can be used as evidence in the alleged police operation.

She is also asking the names of the authorities who led the operation, which was not mentioned in the media reports.

She also insisted her husband was not a drug protector, as alleged by the CITF in its earlier statement.

the CITF said earlier that Rapiz was a protector of the late Iloilo high-value target Melvin Odicta and was receiving P700,000 weekly or P2.8 million monthly.

Michelle said her husband was probably a victim of mistaken identity because there was also a retired police officer in Panay area who has the same name.

She said her husband had received awards and commendation because of his principle and his intensified campaign against drugs. The truth is, her husband had even gone against several big personalities, she added.

Michelle said this is the very first time that the New People's Army (NPA) recognized the efforts of a police officer and even vouched for his character.

"This is to show that they have respect on my husband because of his work against illegal activities," she added.

She challenged those who destroy the name of her husband to face the statement of the NPA.

In 2016, Rapiz was transferred to Zamboanga from Negros Occidental after he was tagged as alleged drug protector by Western Visayas' HVT Ricky Serenio, along with six others. But she said that such reassignment has no basis.

Meanwhile, Rapiz was laid to rest Sunday, November 11, at Roselawn Memorial Park in Barangay Bata. His family offered white balloons and doves as a symbol of peace while they continue to seek justice for his death.

Rapiz was not given full military honors because he was killed allegedly due to his involvement in illegal drugs but a Philippine flag was placed on his casket. (GYM)