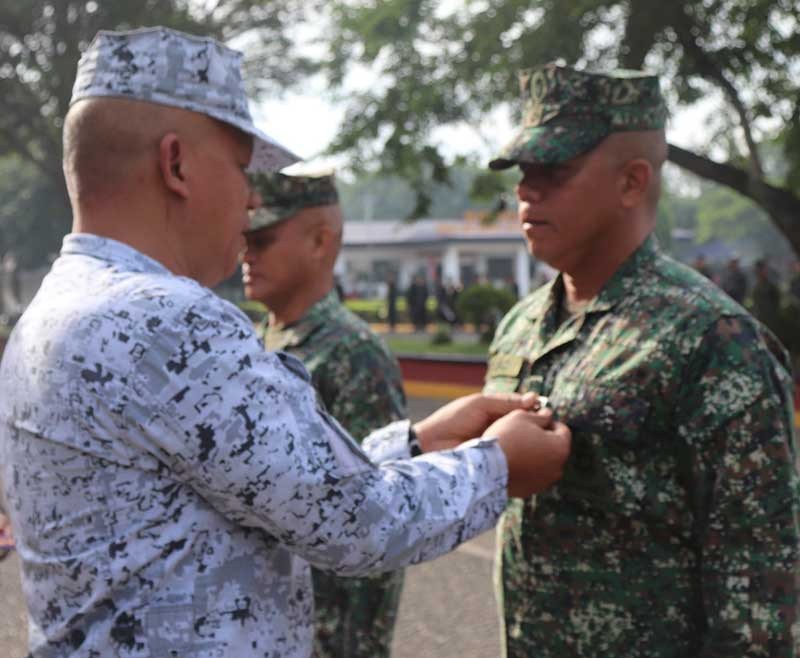 ZAMBOANGA. The Naval Forces Western Mindanao has awarded medal to the troops involved in the successful rescue of a kidnap victim on November 1 in Sulu. (Contributed photo)

THE Naval Forces Western Mindanao (NFWM) has awarded Bronze Cross Medal to gallant sailors and marines for the successful rescue of a kidnap victim from the hands of the Abu Sayyaf bandits in Sulu province.

Medina said the giving of awards and recognition to the troops is one of the military traditions in recognizing their exceptional deeds in the performance of duty and shared sacrifices as well as persistent efforts.

He added that it is also one way to boost the morale of the soldiers.

The awardees were involved in the successful rescue of Jose Duterte, 63, on November 1 in Kandayok village, Panamao, Sulu.

Duterte and his wife, Jessica, 53, were seized by five Abu Sayyaf bandits in the evening of March 3, 2017 while they were resting in their residence near the shore in Barangay Sta. Maria, Siocon, Zamboanga del Norte.

The Abu Sayyaf bandits freed Jessica on October 31, 2017 in Basilan province but are still holding nine hostages. Two of them are foreigners--Dutch and Vietnamese--and seven are Filipinos. (SunStar Philippines)