Becoming his own boss 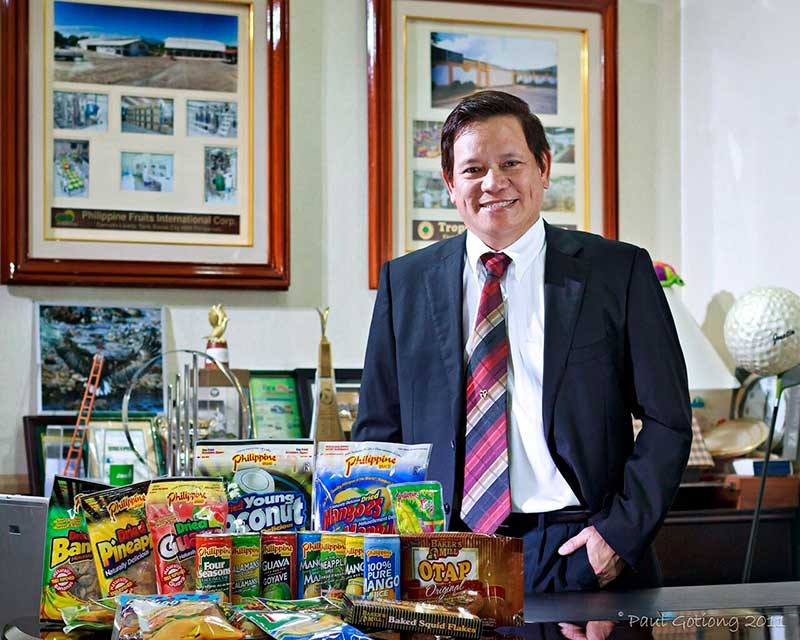 Conquering other markets. It was when he began exporting to Japan that Justin Uy realized he was on the right track. Profood International Corp.’s products are sold in 54 countries. (Contributed photo/Paul Gotiong)

FOLLOWING one’s instinct is often what starts an entrepreneurial adventure. But it takes real guts, hard work and determination to achieve success.

During his childhood days, Justin Uy, founder of Profood International Corp., promised himself he would never work for anybody. He said he would do whatever it takes to build a business empire.

Justin’s father worked as a salesman of a Manila-based cigarette company while his mother was a housewife, taking care of his 10 other siblings and the household.

He took up chemical engineering at the University of San Carlos. Justin recalled his father wanted him to pursue that course so he would get employed in the same company his father was working for.

“But I didn’t want to work for anybody,” said Justin.

Brought up in a typical Chinese family, Justin learned what it was like running a business. He learned his marketing and social skills from his father, whose work involved distributing cigarettes to store outlets.

Justin ventured into several other businesses before the famous Philippine brand of dried mangoes hit the local and international stores.

While still in high school, Justin partnered with his brother James to set up a fashion accessory business made from shell craft. They borrowed capital from their relatives to be paid with interest.

“That time, we had no money to start, so we approached our relatives to lend us some money. Of course, it was not for free,” said Justin.

The venture, however, did not last long because the business was seasonal.

Justin said after six months of brisk sales, orders start to lessen approaching the second semester or during the winter season.

“At that time, we felt the business had no future, so we closed it,” said Justin.

The brothers partnered again for another business. Using the money left from their first venture and some more borrowed money, they went into poultry.

While reaping sales from the new found venture, Justin partnered with another brother, John, on the side, for another business. This time, it was a small mushroom farm in Mandaue City.

“I woke up at 5 a.m. to harvest the mushrooms and then at 7 a.m., I started delivering them to houses and restaurants. We did these every day,” shared Justin, adding that the largest volume they handled was 20 kilos of fresh mushrooms.

But because mushrooms only have one-day shelf life, the brothers had difficulty sustaining the business. It helped that John finished his medical studies.

Justin’s dried mango business came to life after a kitchen encounter with a relative.

He shared that he saw his aunt making some dried mangoes, a eureka moment for him, thinking that this could be a potential business.

“In business, it’s always trial and error. You have to try it so you’ll know if that business is for you,” he said.

This time, Justin had to focus on preserving the shelf life of the dried mangoes.

“It is a good business to venture into because we are blessed with mangoes, plus they are affordable,” he said.

Learning from his past business ventures, Justin promised himself he would do great in this next venture- his fourth—especially since he was single-handedly running it.

Today, Profood International Inc. sells dried/processed fruits, including juices, in 54 countries. Its core product is dried mangoes, which has been expanding in the global market annually.

After Cambodia, Uy is also setting up a plant in Vietnam to capture the Asian market.

Besides manufacturing, Justin has also diversified into other industries. He has ventured into real estate by building J Centre Mall. They also bought JPark Island Resort and Waterpark through the BXT Corp.

Now the Uys are expanding their empire more than ever. Following their hotel and mall investments, the family also ventured into residential real estate projects.

Justin said they will build the highest residential tower in Mandaue City. The company has also spread its wings outside of Cebu. BXT Corp. is expanding to Panglao Island in Bohol.

I did not apply for a job after graduation because I was determined to become my own boss—be an entrepreneur. I wanted to work hard on something that was mine rather than work for somebody else and build their empire.

But I believe I was born to be in business. I believe I had that passion for business within me, even from the start. I just had the confidence to make it happen.

When I saw the business picking up and slowly entering other markets like Japan, a market that is so picky to do business with Philippines, especially for food, I knew I was on the right track.

It’s difficult to enter Japan. You must have to prove your worth. Determined, I approached Del Monte Philippines to do the packing for some of their products. There, I learned about the firm’s best business practices, which eventually paid off because I was able to adopt it in my own business.

When I joined an expo in Japan, I also took advantage to introduce the business. People will not know what you are selling unless you tell them. All I had back then was the confidence and the belief in our own Philippine products. After all, we have the best quality of mangoes. But it was the mango puree that first entered the Japanese market.

This was a business that had the potential to really become big, but only if you take care of it and if you constantly innovate. Adoption of modern equipment and instituting best practices will get you ahead in manufacturing. Another thing, too, is this is a business that can generate more jobs. So if you grow the business more, enter new markets and come up with more products, the chances of creating more jobs and helping farmers is also exponential.

I did not take further studies after college. Experience was my best teacher, plus I never stopped myself from learning whenever I met new people or joined tours and expos. For me, these are also best avenues to widen your knowledge in business. But nothing beats learning from something you tried doing, because if you don’t, then you will never know.

I don’t really treat my past ventures as failures. They were my stepping stones. If not for those failed attempts, I wouldn’t be able to get to where I am today, and I wouldn’t be able to bring the business this far. Mistakes sharpen you as a person. They make you a become a better entrepreneur, wiser than yesterday.