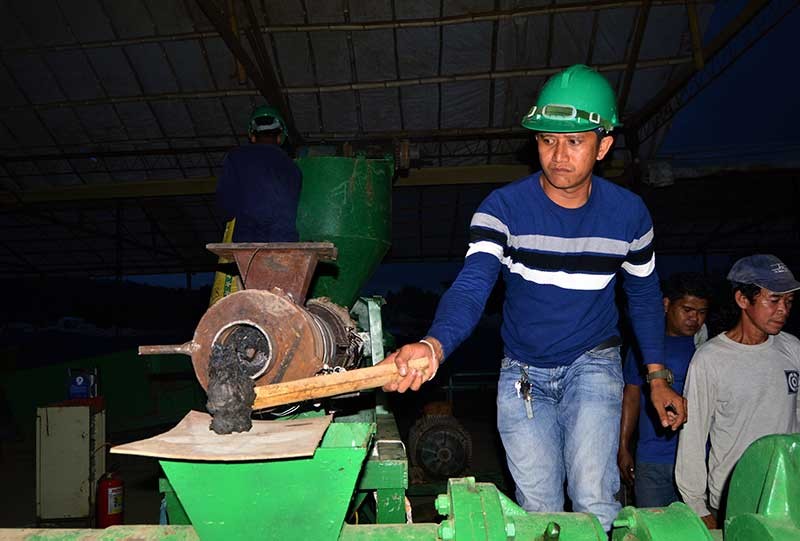 A Verde Soko Phil. Industrial Corp. worker checks the clump of plastic that underwent a recycling process at the company’s facility in Sitio Buguac, Barangay Santa Cruz, Tagoloan. Verde Soko will produce pellets and briquettes which it will export to China and South Korea and will be made into plastic furniture and other items. (Jigger J. Jerusalem) 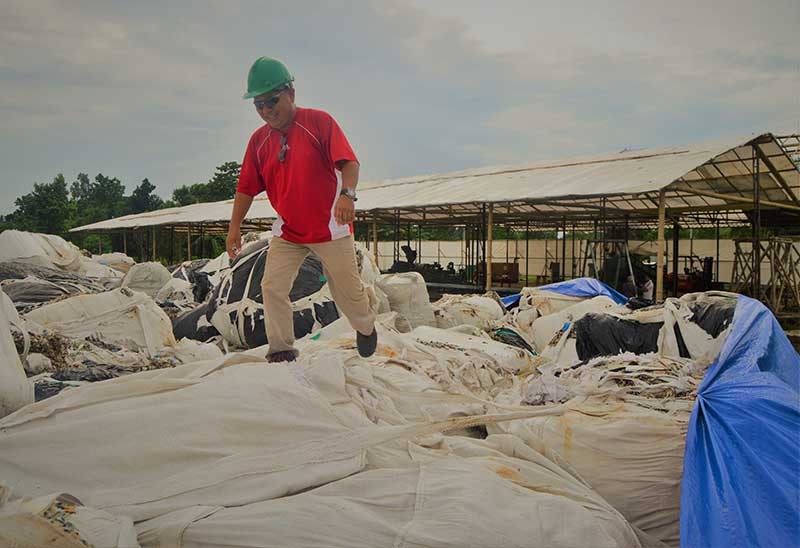 Verde Soko Phil. Industrial Corp. project engineer Nathaniel Carampatana walks past the bales of shredded plastics that they will use as raw materials for the company’s recycling facility in Sitio Buguac, Barangay Santa Cruz, Tagoloan. Verde Soko will produce pellets and briquettes which it will export to China and South Korea and will be made into plastic furniture and other items. (Jigger J. Jerusalem) 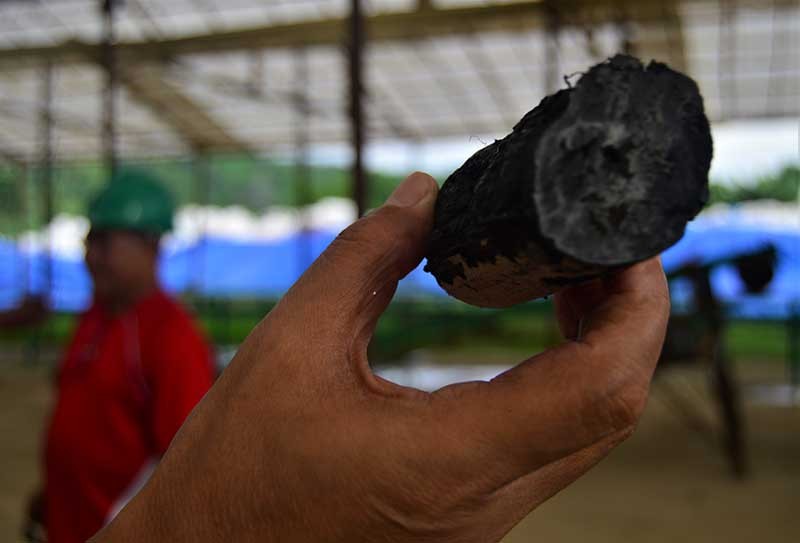 A journalist holds a clump of recycled plastic that underwent a recycling process at the company’s facility in Sitio Buguac, Barangay Santa Cruz, Tagoloan. Verde Soko will produce pellets and briquettes which it will export to China and South Korea and will be made into plastic furniture and other items. (Jigger J. Jerusalem)

ALLAYING fears that it has imported toxic trash from South Korea, a company engaged in recycling of discarded plastic materials has assured that it is following environmentally approved processes as it vowed to comply with all the regulations set by government regulatory bodies.

Verde Soko Phil. Industrial Corp. was on the limelight lately when tons of plastics arrived in a local port recently and was feared that Northern Mindanao will become the new dumping ground of garbage from other countries.

But Verde Soko president Neil Alburo said their business is not harmful to the environment but is, in fact, one of the measures to address the worsening garbage problem, especially the disposal of plastics that clog the waterways and pollute the ocean.

Verde Soko has imported at least five metric tons of shredded “soft” plastics from South Korea in July and additional 51 container vans containing the same materials that arrived at the Mindanao Container Terminal sub-port in Tagoloan in October.

The soft plastics, he said, are to be recycled into pellets and briquettes, which will be shipped back to South Korea and China to be made into plastic furniture and other items.

Soft plastics refer to plastic grocery bags and other light materials made of the same ingredient.

Alburo clarified that they have complied with all the requirements set by the PIA before they are allowed to set up shot at Buguac.

Alburo assured that their operation will be pollution-free and will not be harmful to the environment or to the people living nearby.

Jara added PIA and Verde Soko had signed a memorandum of understanding in June allowing the processing of plastic materials inside the ecozone.

He said the most important requirement that entities must secure before they can put up a business in the Phividec industrial estate is the Environment Compliance Certificate (ECC) issued by the Department of Environment and Natural Resources’ (DENR) Environmental Management Bureau (EMB).

In an interview Tuesday afternoon, Jara said, “the very basic document that we require is the ECC which they were able to produce, as early as June this year.”

“We are in an ecozone, we are embedded with the rules and regulations of the DENR. We have to follow,” Alburo said.

“The company is here to help solve the problem of plastic pollution,” he said, on why Verde Soko went into plastic-recycling business.

The company’s imported raw materials, however, are still under the custody of the Bureau of Customs-10 (BOC-10) pending compliance of two alleged violations Verde Soko has reportedly committed.

BOC-Northern Mindanao collector Floro Calixihan said that based on their findings, the materials imported by Verde Soko were misdeclared as “plastic synthetic flakes” but they found out the shipment was composed of all sorts of plastic.

Also, the company has yet to secure an import permit from the DENR. As of this writing, the environment department has yet to inform the media that it has already issued said permit to Verde Soko.

He said the Customs has issued a warrant of seizure and detention until the issue is resolved within 15 days through a legal proceeding.

Calixihan said they have summoned the Verde Soko management for a hearing in which the Customs will give the company the chance to respond to the alleged violations.

“Verde Soko said they will follow the Customs laws and regulations, however, we cannot wait for the submission of their documents. Based on records, we have to issue a warrant of seizure and detention against the shipment of Verde Soko,” the collector said in an interview Wednesday morning.

Verde Soko has yet to reply to the pronouncement of the Bureau of Customs, although Alburo has assured in a previous interview that they are complying with all the requirements demanded of them.