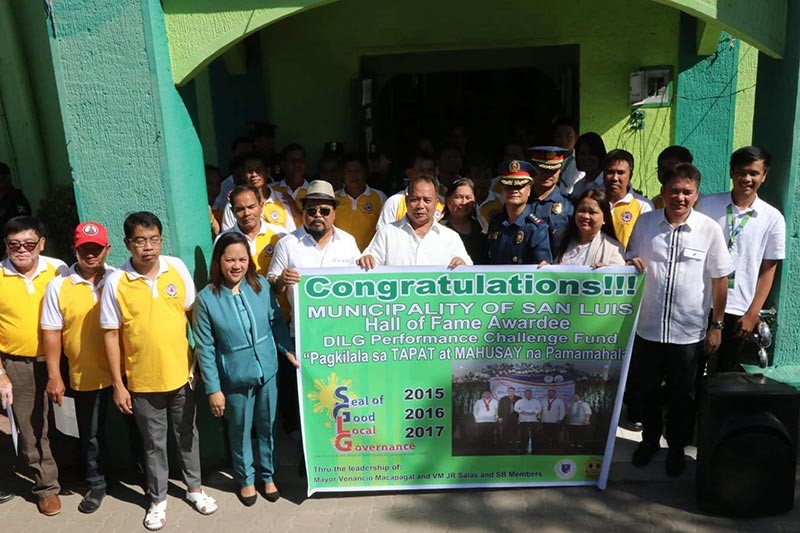 THE Municipal Government of San Luis was recently included in the roster of hall of famers of the coveted Seal of Good Local Governance (SGLG) award given by the Department of Interior and Local Government (DILG).

After three consecutive terms, outgoing San Luis town Mayor Venancio Macapagal is optimistic that he has fulfilled his duty as local chief executive and is leaving this fourth district municipality in good state.

“From a municipality that is only known for its farmlands, we are now slowly being recognized for the development that we have spurred over the years and our SGLG Hall of Fame award is a clear manifestation that we are on the right track,” Macapagal said.

The SGLG Hall of Fame award is conferred to local government units that demonstrated exemplary performance in good governance for three consecutive years which are measured on several core areas such financial administration, disaster preparedness, social protection, peace and order, business friendliness and competitiveness, environmental protection, and tourism culture and the arts.

Macapagal added, “With the momentum of development we have today, I am confident that I have performed my job for my fellow San Luiseños, and that I am leaving a good legacy to everybody, especially the youth,” he said.

Macapagal challenged future elected officials to sustain and boost the momentum to ensure that San Luis will become one of the competitive municipalities for the benefit of the future generation.

Sharing his formula to the next mayor, Macapagal said, “Always work for the interests of the majority and avoid mixing personal agenda to work stuff and always be transparent. It always boils down to your willingness to serve the public, most especially the needy.”