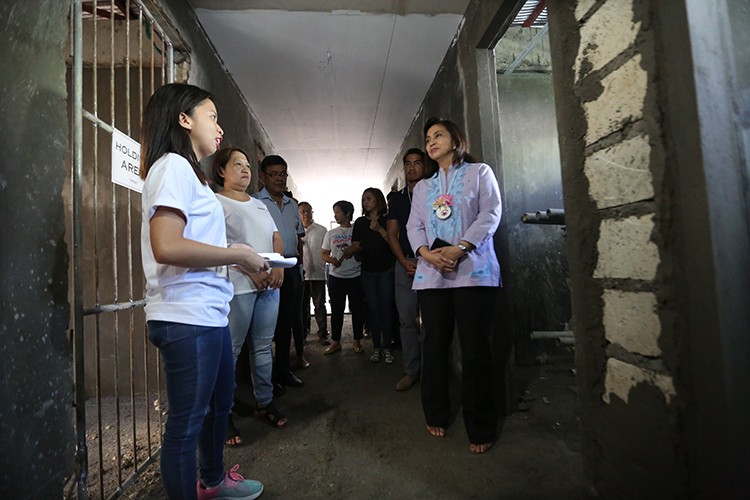 IT’S not usual for a local government unit (LGU) to build a mental health facility, so Vice President Leni Robredo took notice when a third class municipality like San Remigio proposed to build one. Most mental health facilities, especially in Cebu, are either privately owned or built and managed by the Department of Health.

Robredo was in Cebu Saturday, Nov. 17 to check the ongoing construction of the facility in San Remigio town.

San Remigio was among the towns badly hit by super typhoon Yolanda in 2013. According to the town’s public information officer, Niño Wilo Ybañez, that was the time mental health became an important conversation in the town.

Together with non-profit disaster relief and global health organization Americares, San Remigio started a community-based mental health program to raise awareness of the issue as well as administering free medication to the patients.

Enter the Office of the Vice President, which downloaded P2 million to the Municipal Government, for the construction of the mental health facility to continue the town’s program.

“The good thing about San Remigio is that it’s a proactive LGU,” said Robredo in Tagalog. The statement was quoted by Ybañez to SunStar Cebu. “That’s why we decided to come here because Mayor (Mariano Martinez) is actively looking for partners. ...And now that we’re here, I’m very impressed with the town’s health program.”

Robredo said she is even more motivated to help the city.

According to the town’s public information office, the facility, which is undergoing construction, is about 100 square meters. It will have four holding rooms for mentally ill patients who need to be confined, four treatment and counseling rooms, a reception area and an office.

Solana Foundation, which is a partner of Robredo’s Angat Buhay program, donated P231,986 to equip and furnish the facility, which will be operated by the LGU and managed by the municipal health officer.

San Remigio also partnered with the Philippine Mental Health Association - Cebu Chapter, which had started doing a monthly community clinic in the town. Soon, the group, composed of psychiatrists, social workers and advocates, will be doing consultations, administration of medicines and therapy sessions in the facility.

The facility is expected to be finished before the year ends.

According to the Philippine Information Agency (PIA) 7, San Remigio is assisting 204 residents with mental health conditions ranging from anxiety disorder, depression, psychotic disorder and some developmental and behavioral disorders. Robredo met some of them.

Of course, Robredo could not get out of answering a question regarding the mother of former senator Bongbong Marcos, whom she defeated in the 2016 vice presidential race. The issue was on the P150,000 bail that former first lady Imelda Marcos posted after she was convicted of seven counts of graft for illegally funneling about $200 million to Swiss foundations in the 1970s when she served as Metropolitan Manila governor while her late husband, late dictator Ferdinand Marcos, placed the Philippines under martial law.

“It’s sad,” Robredo said in Tagalog. “We’re happy that after a long time, justice has been served to the citizens. But what’s sad is that we can also see that the dispensation of justice is not fair. What is the implication in our country?”

“The P150,000 bail is so small considering the enormity of what was stolen. Secondly, that’s just loose change for her. I’m also a lawyer for the low-income people. I can see how a P10,000 bail would drive my clients to pawn what small properties they have, borrow money from whoever just to come up with the amount. But for someone this rich, it’s like we’re giving her a free pass.” JGA