Magdalo lawmaker: We are not terrorists 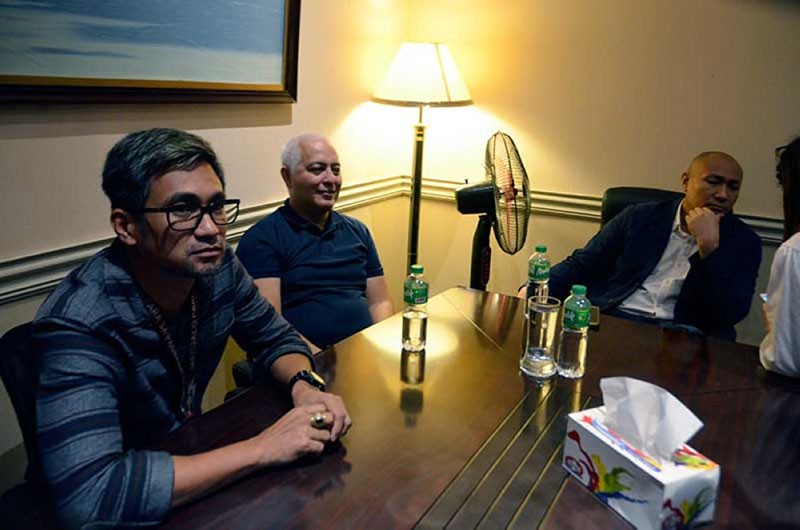 MANILA. In this photo taken on September 7, 2018, members of the Magdalo Group including Representative Gary Alejano (right) show their support to Senator Antonio Trillanes IV, whose amnesty was revoked by President Rodrigo Duterte. (File Photo)

In a statement, Alejano defended the Magdalo group and clarified that its members are not terrorists.

"First and foremost, the Magdalo are not terrorists. It is extremely flippant and utterly disrespectful for the President to liken us to terrorists,” he said.

"Being former soldiers, we have risked our lives on many occasions to fight terrorists and protect our country from enemies of the state,” said Alejano, who represents the group in Congress.

The Magdalo is a group of former dissident soldiers who staged uprisings against the Gloria Macapagal-Arroyo administration.

On Friday, November 16, President Duterte warned the Filipino community in Papua New Guinea to be careful with the Magdalo group, saying they know nothing but to kill and malign, and that they are like the Islamic State of Iraq and Syria (Isis).

Alejano debunked the claims of the President, saying the corruption in the Arroyo-led administration had led them to stage the Oakwood Mutiny in 2003 and the Manila Peninsula Siege in 2007.

He added that in those failed uprisings, they did not fire a single shot nor harm anyone.

(This administration has many times belittled our group's advocacy. We wish to remind the public that we protested against the rampant corruption in government during the Arroyo administration.)

“When we were assigned in different parts of the country, we saw first-hand the poverty and lack of government services for Filipinos. Worse, we saw the corrupt activities of government and military officials while the people and soldiers on the ground were struggling,” Alejano added.

The lawmaker said it was not their intention to sow fear and terror or to fight against the military and the police.

He said their only intention was to air their grievances and expose corruption in the government.

“It is standing for our principles and our love for the country which led us to the Oakwood and Manila Peninsula incidents. I do not expect our transactional President, who sells our territory to China and betrays our country, to understand such values of patriotism and nationalism,” said Alejano.

Alejano believes that the attacks against Magdalo are part of the administration’s moves to intimidate and silence the opposition.

“I hope that the President would give dignity to the office. Filipinos, regardless of political affiliation, want to be represented in the international stage by a true leader who acts and speaks accordingly and who they could be proud of,” ended Alejano.

One of the most vocal critics of the President, Senator Antonio Trillanes IV, is also a member of the Magdalo group. (SunStar Philippines)