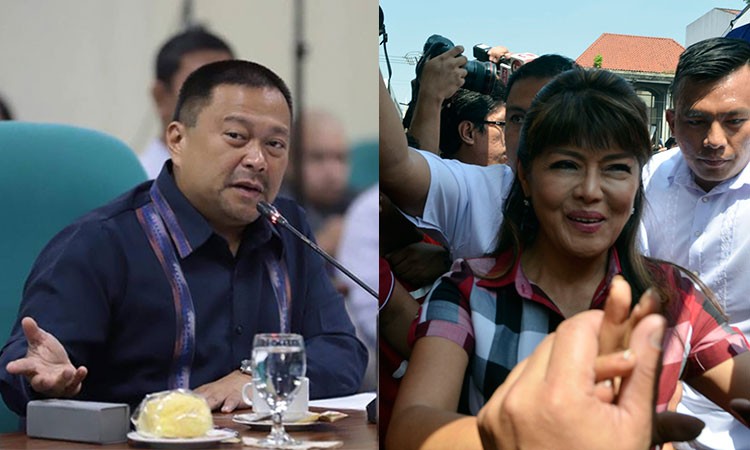 SCROLLING down: Imee says she was present on the three occasions the president verbally slammed Mayor Tomas Osmeña... JV Ejercito is resigned to the long-running quarrel with his sibling Jinggoy Ejercito.

First, people are talking about...

The naps must have energized the president but not adequately to enable him to attend the important functions for which he took the said power naps. The seven illnesses, unlike the seven deadly sins, were Mrs. Marcos's excuses for missing the promulgation of her sentence by the Sandiganbayan last November 9.

Not the Osmeña nature

The A-list personalities who flew to Cebu last Saturday (November 17) to attend the wedding of the daughter of Siquijor Governor Zaldy Villa included Imee Marcos and JV Ejercito who are both running for senator and obviously wanted Villa's support in their 2019 bid. The wedding was held in Cebu City instead of Siquijor apparently for the convenience of out-of town guests.

Among other meetings they must have squeezed into their brief visit was a private gathering of Cebu media persons at Beehive along F. Ramos St. JV came first. Several minutes after he left, Imee arrived.

Imee, as in the press-con earlier held, didn't talk about her mother's conviction for multiple graft involving US$200 million (not $200,000, as is sometimes confused in the news reports). Nobody asked her at the private gathering although she talked on a number of things: from publishing (she owns a tabloid in Ilocos) to art and music in Davao, to Cebu politics.

She said she was present on the three occasions that President Duterte "whacked" (her word) Cebu City Mayor Tomas Osmeña, including the first in Mandaue City and that done in Ilocos Norte. On Serge Osmeña, who filed a COC for senator, she wondered why the former senator said he would abide by the Comelec decision on the threat of disqualification against him (for allegedly failing to file two consecutive SOCEs or statements of contributions and expenses in 2010 and 2016).

Not the Osmeña nature not to fight back, she said. "Di tipong Osmeña," or words to that effect.

JV was asked about his half-brother Jinggoy who is also running for senator, each of whom could hurt the chances of the other to win.

Like Jinggoy, JV seems inclined to keeping the long-running feud between them which started, he said, when he ran for and won as mayor of San Juan. JV was mayor from 2001 to 2010 (his mom Guia Gomez is now the mayor there), then became senator in 2013, his term ending next year.

Jinggoy, whose full first name is Jose Pimentel, served two terms, from 2004 to 2016, rested and now braces for a third term. They're not talking to each other, which could drag on in the next term of the Senate -- if both of them would win.

One time, JV said Jinggoy was about to enter an elevator at the Senate but upon seeing his brother inside, the older sibling (Jinggoy is 55; JV is 49) waved it away, indicating he'd take the stairs.