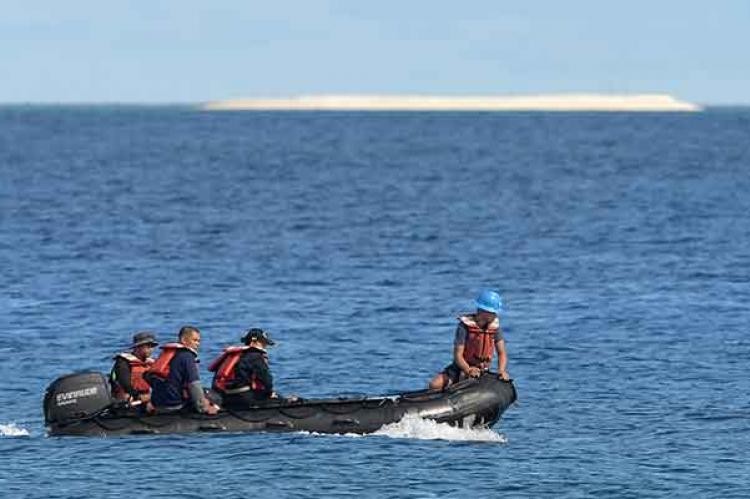 EIGHTY percent of Filipinos have expressed opposition to the government's "inaction" on China's intrusion in claimed territories in the disputed South China Sea, the September 15 to 23 poll conducted by Social Weather Stations (SWS) showed.

The poll found that 84 percent of adult Filipinos believed it is "not right" for the Philippine government to "leave China alone with its infrastructure and military presence in the claimed territories."

"[Eighty four percent] of adult Filipinos reject the government’s policy of doing nothing about China’s intrusion in the West Philippine Sea," read the SWS survey, which was released on Tuesday, November 20.

The latest figure was higher by three percentage points from the 81 percent recorded in June, the SWS noted.

Around 86 percent also deemed it "right" to strengthen the military capability of the Philippines, especially the Navy, up by six percentage points from June's 80 percent.

Also, 71 percent said it is "right" for the Duterte government to raise the issue before international organizations, like the United Nations or the Association of Southeast Asian Nations, for a "diplomatic and peaceful negotiation with China about the claimed territories."

The number of Filipinos who want to bring the issue before the international organizations was only three percentage points below the 74 percent posted in June.

The same survey also revealed that 87 percent considered it "important" for the Philippines to "regain control of the islands occupied by China in the West Philippine Sea."

Only three percent said it was "not important" to regain control of the disputed waters, while 10 percent were ambivalent on the matter.

The survey also revealed that 65 percent of Filipinos were already aware that the Chinese coast guard had previously forced Filipino fishermen in the South China to turn over their catch even before the survey, while the remaining 35 percent learned about the issue for the first time during the interview with SWS.

Prior to the September poll, 62 percent already knew that the Philippines was unable to prevent Chinese fishermen from fishing in the contested waters, and 50 percent was already aware that China created artificial islands for military purposes.

The survey was released Tuesday, November 20, the day of Chinese President Xi Jinping's arrival in Manila for a two-day state visit.

Reacting to the survey, Presidential Spokesperson Salvador Panelo said the Palace found the timing of the release of the poll results "suspect," considering that such was made public on the day of Xi's arrival in Manila.

"This adds credence to the commonly-held belief that polling firms could be wittingly or unwittingly used for partisan purposes," Panelo said in a statement.

Panelo also hit the SWS's "flawed questionnaire design" with regard to China and the sea disputes, particularly the questions being phrased "to arrive at the results of the survey."

He said the Palace considers the questions "skewed," because "it misleads the public to believe and suggest that the current government has not acted on China’s activities on the disputed areas in the West Philippine Sea."

"This is far from the truth. The Duterte administration has been consistent in its stance in protecting our territorial claims and maritime entitlements," the Palace official said.

"We have formed, together with the Chinese government, a bilateral consultation mechanism as an important venue in amicably resolving territorial disputes and to strengthen the momentum of cooperation in matters of common interest, such as the protection of our fishermen," he added.

Panelo thus said the executive branch viewed the poll results "with skepticism as the reliability of the data is in question."