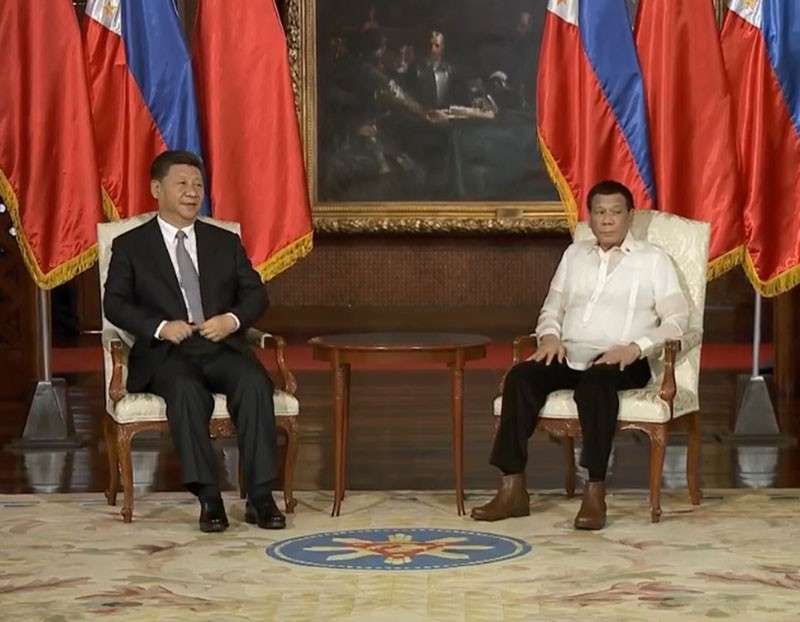 MANILA. President Rodrigo Duterte and President Xi Jinping of the People’s Republic of China witness the exchange of several agreements during the latter’s State Visit to the Philippines at the Malacañan Palace on November 20, 2018. (Photo from RTVM video)

(UPDATED) - The Philippines and China have signed at least 29 agreements, including the joint oil and gas exploration deal, during Chinese President Xi Jinping's historic state visit to Manila under President Rodrigo Duterte's watch.

After their expanded bilateral meeting, Duterte and Xi witnessed the signing of the agreements, which include a memorandum on understanding (MOU) that seeks cooperation in oil and gas development between the Philippines and China.

On the sidelines of the signing of agreements, Energy Secretary Alfonso Cusi explained that the MOU on oil and gas and development was meant to "explore a solution [on] how we can enjoy the resources in the area."

China, which claims nearly 90 percent of the resource-rich South China Sea, has expressed willingness to enter into a 60-40 joint exploration arrangement with the Philippines.

Under the joint exploration arrangement, Manila will receive 60 percent of the oil and natural gas deposits while Beijing will get the remaining 40 percent.

Cusi, however, told reporters that the Philippines and China have yet to determine the specific area that they would explore.

In October, Malacañang emphasized the need to fast-track the procedures for the impending joint exploration agreement between the Philippines and China in the contested South China Sea, explaining that the deal would be beneficial for Manila, which is heavily dependent on oil imports.

In March, the two nations considered the conduct of joint exploration and exploitation of oil and gas reserves at Service Contracts (SC) 57 (Calamian) and 72 (Recto Bank) "by corporations and not by sovereign states."

The Energy department, however, issued a moratorium on all exploration and drilling activities in SC 72 in December 2015 amid the escalating maritime tension with China. The moratorium has yet to be lifted.

As for the South China Sea disputes, Xi said both countries have agreed to resolve sea disputes through "friendly consultations."

Xi said he and Duterte also both committed to work with Southeast Asian nations towards the conclusion of consultations on the Code of Conduct in the South China Sea within three years to ensure peace stability and welfare in the region.

"China and the Philippines have a lot of common interests in the South China Sea. We will continue to manage contentious issues and promote maritime cooperation through friendly consultation," he said.

Meanwhile, other signed bilateral agreements aim at boosting cooperation in the field of trade and investment, infrastructure, agriculture, education, culture, and people-to-people exchanges.

The Philippines and China also has an exchange of executive program of the cultural agreement for 2019 to 2023.

They also exchanged protocols for sanitary and phytosanitary requirements for the export of fresh young coconuts and frozen fruits from the Philippines to China.

They also handed over a letter of no objection to the organization of Renminbi-Philippine peso foreign exchange trading market, as well as a certificate of authority to operate the Industrial and Commercial Bank of China Limited Manila branch.

In a statement delivered after the signing of agreements, Duterte said he was elated by the "growing strength" of the Philippines and China's friendship and cooperation.

"A lot of work remains, but President Xi's visit gives us new impetus to our mutual efforts to enhance collaboration in ensuring the well-being of our peoples and contributing to peace and stability in the region," he said.

"I am pleased with the current positive momentum of the Philippines-China relations," Duterte added.

For Xi, the two nations' "strong" relationship was a "shared asset of the two countries' peoples."

The Chinese leader also noted that he and Duterte both agreed to elevate their relationship into "comprehensive [and] strategic cooperation."

"This vision charts a clear course for China-Philippine relations and sends a strong message to the world that our two countries are partners in seeking common development," Xi said.

"Both sides have the view that we have been good and close neighbors for thousands of years, that our relationship has been defined by equality, mutual assistance and common destiny," he added. (SunStar Philippines)