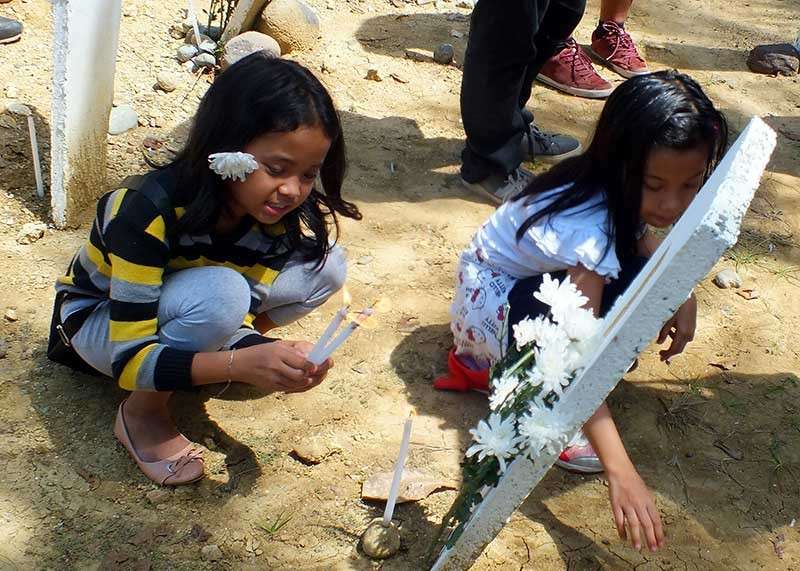 MAGUINDANAO. In remembrance, Eleanor Dalmacio’s daughters offer flowers at her marker in Ampatuan town during the commemoration of the Maguindanao massacre. (Photo by Ma. Elena Catajan)

MAGUINDANAO - Families of the 58 Maguindanao massacre victims set fire to images of the Ampatuan clan as they continued to call for justice to give peace to their loved ones who were killed nine years ago.

As emotions rose on Sunday, November 18, Eleanor Dalmacio’s daughters played like it was a picnic, far from the reality of the activity intended by over a hundred who came to commemorate the ninth anniversary of the massacre in Mindanao.

Renalyn, 10, and Frazita, 9, were busy building stone totems in front of their mother’s marker while a program was being held, oblivious to the condemnation of her grizzly death by a convergence of media organizations.

Eleanor, who was a reporter for the Soccsksargen News Today, was part of the convoy of Genalin Mangudadatu on November 23, 2009. She and 32 other journalists were shot dead and buried on the hillside.

Today, Brenda Dalmacio – Acma stands as official guardian of the two children. The eldest child of Eleanor has married.

“They were babies when their mother died, but Renalyn says she remembers,” Acma said.

Brenda said Renalyn swears she remembers her mother riding a motorcycle or says she recalls scenes around the house when she was still alive.

“She understands what happened to her now,” Acma added.

Brenda, a government worker, says there is no update on the Ampatuan case, but has slowly explained to the children what happened to their mother.

The 58 victims included 32 journalists and media workers who covered the filing of the Certificate of Candidacy of Genalin Mangudadatu’s husband for the 2010 Maguindanao gubernatorial race at the regional office of the Commission for Elections (Comelec) in Shariff Aguak, Maguindanao province.

The National Union for Journalists, Center for Media Freedom and Responsibility, Philippine Press Institute, Philippine Center for Investigative Journalism and Mindanews led the commemoration of the massacre and stood united with families of the victims in their call for justice and media safety.

The CMFR reported 99 cases of attacks against the press since 2016, with 66 reported and verified in Luzon, 12 in the Visayas and 21 in Mindanao.

Threats to radio media practitioners top the list with 33, followed by print media with 30, online media platforms with 23, television workers with 11, and a lone case against a photojournalist and online worker.

Attackers were identified as government agents, online trolls, private citizens, NPA members and still unidentified individuals who have put into threat men and women in the industry.

The commemoration was also highlighted by the launch of the NUJP of the “Sign Against the Sign” campaign, which urges Congress to repeal the law that includes journalists among the possible witnesses in anti-drug operations.

Journalists and industry leaders signed a manifesto calling for an end to the practice of making journalists witnesses to drug busts and putting a number of them in danger.

NUJP chairperson Nonoy Espina explained the media groups have consistently opposed this practice when it was made a requirement under the Comprehensive Dangerous Drugs Act of 2002.