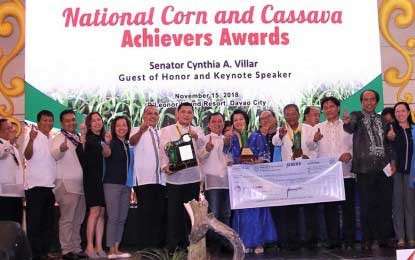 THE Department of Agriculture (DA) bestowed anew to the province of Pangasinan the National Quality Corn Achievers Award, making the province a hall of famer after bagging the award for three consecutive years.

Provincial Agriculturist Dalisay Moya, who is also a hall of fame awardee for outstanding provincial agriculturist, in a radio interview on Tuesday, November 20, attributed the award to the high quality of food and seed grade with low aflatoxin level of the province’s corn produce.

“Aflatoxin is a carcinogenic toxin present in some corns, while in our corn in the province, it is very low and has no effect on animals and people’s health,” Moya said.

Aside from the quality of corn produced in the province, the initiatives of the local government unit are also part of the evaluation, she said.

Pangasinan got the highest ranking on the evaluation of DA, with 104 out of 110 score in the rating for the National Quality Corn Achiever Award, she said.

“The farmers are the real heroes. If they do not plant, we will not have this award,” she added.

The award, along with the P5 million cash incentive, was conferred by DA on November 15 at D’ Leonor Inland Resort in Davao City.

He said the cash incentive will be used in provision of farm inputs, as well as farm equipment to further backstop the farmers sector in the province.