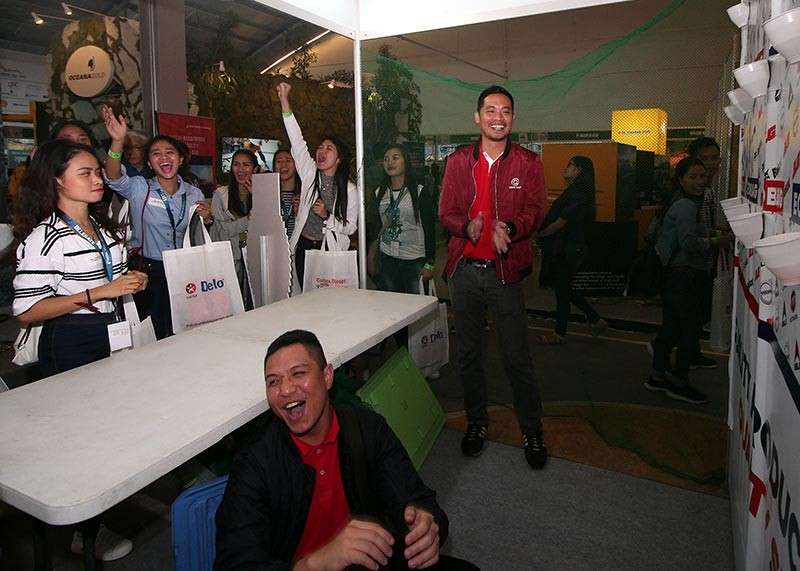 BAGUIO. Participants to the 65th Annual National Mine Safety and Environment Conference check on the different mine exhibits and booths at CAP in Camp John Hay on November 22, 2018. (Photo by Jean Nicole Cortes)

THE Philippine Mine Safety and Environment Association on Thursday, November 22, urged the association and all stakeholders in the mining industry to uphold responsible mining.

“We all realize the damage to the environment is not cause by small-scale mining alone and we realize that we are all for responsible mining. But responsible mining involves everybody in it, forgetting the sins in the past, working together to forge unity and communication to all sectors,” PMSEA president Walter Brown said.

Brown added this can’t be made possible if the regulator, referring to the Mines and Geosciences Bureau is fighting against the regulated.

“Small scale miners are not the enemy, but they are victims because they’re being exploited by various people, those corrupt, both private sector and public sector,” Brown said on Thursday in the opening of the Minerals Industry Symposium at CAP-Camp John Hay.

“Corruption only exists because we only allow ourselves to be corrupted so rather than harping on this points, I’d like to call each and every one of you as professionals and citizens of the republic, interested in the welfare of the people,” he added.

Brown also urged all in cleaning up the mess of small scale mining and the environment. He also emphasized the uniqueness of the association as it is the only one that involves the regulators and the regulated sitting side by side.

“If the regulator is fighting with the regulated every day, nothing will happen. The same way were trying to emphasize, I’ve had with them and I feel that the future of the industry are regulator, regulated everybody are working together. We have common aim together with the administration to improve the ability of the people to live a decent life. It doesn’t matter if you’re a small-scale miner, large-scale miners, supplier or regulator our goal is the same to live a decent life in the spirit of freedom and opportunity for all,” he said.

Thousands from the mining and allied industries took part in the 65th Annual National Mine Safety and Environment Conference (ANMSEC) in Baguio City.

The 65th ANMSEC of the PMSEA seeks to promote safety and health, environmental management and social responsibility in the minerals industry.