16 'abbreviations' everyone over 36 needs to know 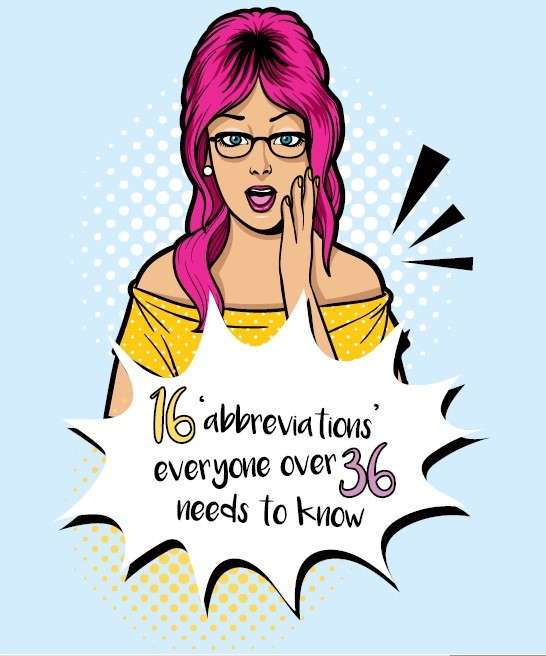 THERE is a huge language barrier between generations these days, all because people are using letters to abbreviate certain expressions. Almost everything now has abbreviations, and with there being an unending possibility of word combinations, it’s almost difficult to decode these expressions—let alone understand the unspoken and implied feelings and meanings behind them. With this in mind, and as SunStar Cebu recently turned 36 yesterday (Yey!)—here is a little list of “modern abbreviations” that everybody above 36 needs to know.

Are you ready? Here goes:

Contrary to what some characters in the comedy series “Modern Family” believe, LOL does not mean “lots of love.” Youngsters these days use it instead of typing out “Hahaha.” Some have even taken to saying “Lol” in person, rather of actually laughing out loud. This is used to express either a certain level of genuine amusement or a certain level of sarcastic amusement.

Ex: “Yeah, she was super angry about it. It wasn’t even about her. LOL.”

This is used in several ways (depending on the situation) to express surprise, shock, frustration and the feeling of disbelief at a preposterous situation.

This expression is used the same way it is normally used by any living and breathing human being.

Some say the abbreviated version of something as short as a six-letter word stemmed from the Twitterverse, an online universe that limits the number of characters a person can use per tweet. Probably for good reason too, because Twitter is also a place where people tend to rant about society. So it’s fitting that the word “people” had to be shortened. If the characters weren’t limited, you’d see pages of rants going on and on—don’t even get me started on the raging Twitter wars!

Ex: “It takes three hours for me to get from Mambaling to Banilad. There are seriously too many PPL on the road. Can these PPL please just stop buying cars!? Ugh, capitalism...”

The way this expression is used can be purely matter-of-fact but others use it defensively or to shake a little blame off themselves when they find they’re sitting in between a rock and a hard place.

Ex: “IDK why she cried but I heard she lost her phone.”

Uhm. Are you, really?

Ex: “OMW! Sorry, the ground opened up and a giant spider crawled out and there were fire trucks everyone so I’m stuck in traffic. Be there in five minutes!”

Another way of saying “just saying,” which is an expression people use when they over-share or when they come to the realization that they have said something that might be taken with offense.

Ex: “TBH, I never really liked that series. I only watched it because my boyfriend liked it and I wanted something to talk to him about.”

BTW/FYI – “By The Way” and “For Your Information”

Because three-word expressions are too long to type these days, “by the way” and “for your information” also fall victim to deserving abbreviations. These expressions are used as matter-of-fact statements but may also be used to exhibit some amount of sass (if said with snaps and some side-to-side head movement). BTW, FYI is the “sassier sister.”

Ex: “BTW/FYI, at first, I never said anything about you. You started with me and I was just returning the favor.” *snap snap*

SMH is used to express disdain or disappointment, but also disbelief at something ridiculous or foolish.

Ex: “This guy threw his plastic utensils in the bin marked “biodegradable.” People these days... SMH.”

This expression gained popularity during the peak of Q&A social networks like Ask.fm, where people can anonymously ask the user questions and the user answers them publicly.

Sometimes, others use JK to pretend that they meant that embarrassing thing they said as a joke.

Everyone has an opinion and everyone is entitled to it, but even if you make that clear, no one is safe from backlash on the internet.

Ex: “IMO dogs are better than cats. No offense, but cats are moody and judgmental creatures while dogs just love you unconditionally.”

Usually this is used when someone completely agrees with a peer about a certain topic, but it is also used as a reply when one does not know what to say. It serves as a virtual nod during digital conversations.

Ex: Girl 1: “Dude, that test was so hard! Do you remember item number 5 in the true or false section? What was that all about?”

This one is usually typed in haste when an emergency comes up in the middle of a juicy conversation or when one of the parties wants a clean exit to stop replying during a one-sided conversation... especially when someone is being creepy on Messenger.

Ex: Boy: “I remember you. You’re the girl who wore red last Sunday. You were super pretty.”

Boy: “I’m serious. I saw you yesterday too at the grocery but I think you didn’t see me because I was hiding behind the spice rack because I’m super shy. I barely talk in person, but I can ramble on in Messenger.”

Boy: “Alright. Where are you going?”

Boy: “Hey! You’ve been gone for two hours. Are you okay?”

It is what it is, but is also usually used to drop nuggets of truth about people.

Ex: “I’m honestly not like this IRL. I’m just under a lot of stress right now.”

TMI – “Too Much Information.”

It usually describes a situation where someone is over-sharing. People use this expression to excuse themselves when they say something personal that may cause others discomfort.

Ex: “Alright. I know that this might be TMI, but I really need to use the bathroom right now.”

We’ll leave it at that for now. Hopefully this helps you as you face the modern-day abbreviated universe. With that, we’ll leave you with a message that you can decode using our list of tips! Goodluck!

BTW, I hope this wasn’t TMI for you. FYI, this was just a little guide to help you IRL. IMO, PPL have a tendency to take things too seriously so IDK how some are going to take this article. LOL. JK. If you have any questions, you can AMA but for now I have to go. But BRB. ILY guys!