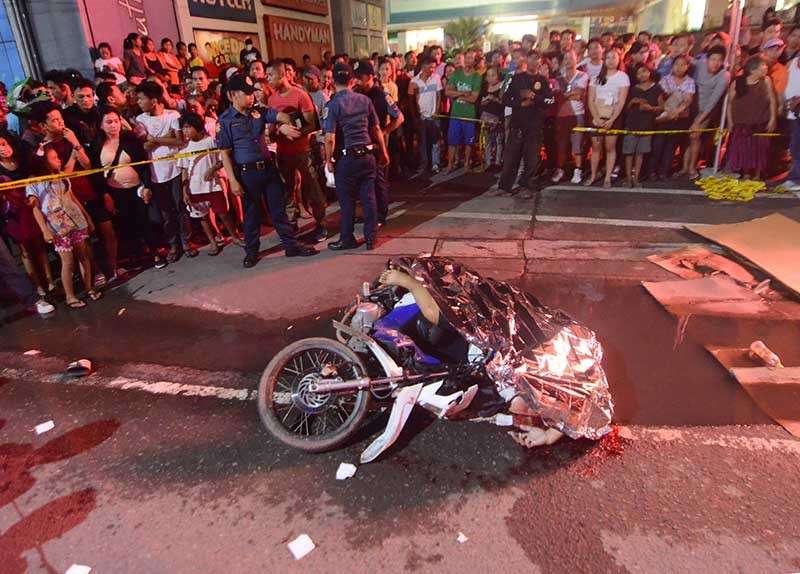 SHOT DEAD. The bodies of the two ex-cops are covered with a foil blanket. (SUNSTAR photo/Alan Tangcawan)

ILLEGAL drugs may have something to do with the fatal ambush of two retired police officers in Barangay Bulacao, Talisay City last Sunday night, Nov. 25.

The two men had served as operatives of the Provincial Anti-Illegal Drug Special Operation Task Group.

Abrugena said he has ordered the Talisay City Police Station to solve the murders.

Abrugena said they still have to check if Causon and Navales had faced administrative charges. They will also look into the victims’ previous assignments and activities, he added.

Conag said Navales was a member of the Talisay City police in 2006, while Cauzon was part of Pardo Police Station in Cebu City in 2016.

Navales retired on Sept. 1, 2013 after he availed himself of optional retirement, while Causon left the service in 2017 for unknown reasons.

Investigators, he said, will try to determine why Causon and Navales were having coffee before they were attacked.

According to initial reports, the two ex-policemen often met for coffee.

The CPPO has started investigating some elected officials of Talisay City, who are allegedly protecting drug personalities, but Abrugena would not identify them yet pending enough evidence.

Meanwhile, Cebu Cebu Provincial Detention and Rehabilitation Center (CPDRC) Warden Reynaldo Valmoria clarified that he had nothing to do with the deaths of the three jail guards. It was just a coincidence that these happened during his watch, he said.

Based on initial investigation, his murder may have been related to illegal drugs.

Perigrino, who was believed to be the target of the attack, also died.

Valmoria said the problem of illegal drugs has always been rampant at the CPDRC even before he took over the facility’s reins. It just so happened that he has been conducting “mini greyhound” operations, which highlighted the problem, he said.

He pointed out that the three jail guards were killed after illegal drugs were recovered from Perigrino.

Perigrino had told prison officials that Alvaro “Barok” Alvaro, another high-profile inmate, was behind the prison’s illegal drug trade.

“Ako gyung gipaningkamotan (nga wa’ na’y makalusot) kay mao man gyud ni atong tuyo unta. For the good bitaw ni (I have been working hard to make sure illegal drugs and other contraband don’t enter the CPDRC. We are doing this for the good of all),” Valmoria said.

Valmoria also reminded jail guards to avoid leaving their posts while on duty without permission from superiors.

On the day he was killed, Castañares was assigned to guard an inmate confined at the Vicente Sotto Memorial Medical Center, but he left suddenly.

Valmoria said a guard caught leaving his post unattended is a violation that could lead to suspension or dismissal.