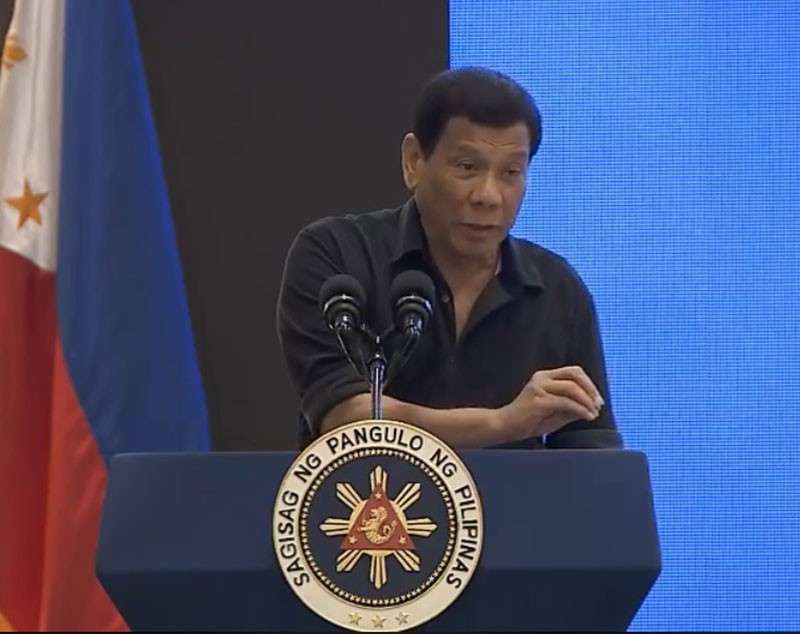 BOHOL. President Rodrigo Duterte speaks during the inauguration of the Bohol-Panglao International Airport on November 27, 2018. (Photo grabbed from RTVM video)

AMID the collapse of the peace talks between the government and the communists, President Rodrigo Duterte on Tuesday, November 27, floated the possibility of creating an "own" Sparrow Unit similar to the infamous hit squad of the New People's Army (NPA).

Duterte, in a speech delivered in Carmen, Bohol, expressed his intent to form his own "Sparrow" that will "assassinate" the NPA, armed wing of the communists.

Admitting that the Philippine troops could be easily defeated by the NPA's Sparrow unit, the Commander-in-Chief said he would create a body that would be called "Duterte Death Squad Against the Sparrow" to match the communist insurgents' fighting skills.

"One of these days, I'll be forced also to create my own Sparrow. Walang hanapin kung hindi yung mga nag-stand by na tao diyan suspected as NPAs at bibirahin rin sila (My own unit will have to look for idlers suspected as NPAs, and they will be assaulted)," Duterte said during his visit to Camp Rajah Sikatuna in Bohol.

"Makakuha ka lang ng isa dalawa, maka-identify na, 'Iyan sir, kasama namin,' okay na iyan (If you find one, two identified by someone as a member of NPA, that would be fine). I will match their talent also of assassinating people. May armas iyan sigurado. 'Yun ang balak ko (They are probably armed so that's my plan)," he added.

Duterte's remarks came amid the apprehension of leaders of the National Democratic Front (NDF), political arm of the communist party, to return home to hold an informal dialogue with the Philippine officials to pave the way for the possible resumption of talks.

The President lamented that the communist insurgents refused to heed his call for a successful peace negotiations, despite his administration's efforts to "make peace with them."

(I'm trying to make peace with them, but they don't want it. And they're killing my policemen and soldiers. So now, we don't have the Sparrow unit, and that's the only problem. So I'll create my Sparrow unit -- Duterte Death Squad against the Sparrow.)

Amid his plan, Duterte warned the military and the police against the communist rebels, stressing that they are "no match" with the NPA's Sparrow unit.

He added that he gave the government forces side arms, as a protection against the communists.

(You are no match with the NPAs who are members of the Sparrow. There was a time that they're killing soldiers going aboard the truck. They shoot them as if they're dogs.So I decided, I said, to give you side arms so you will have the confidence to fight them.)

"Do not be reckless. Dalawa... Ang una niyan is talagang papatayin. Kalaban ka eh. Pangalawa, yung baril niyan. Mainit masyado iyan. Ngayon, halos may cellphone man kayo, if you are in a place, in the house, or attending parties like that, be careful because they're on trail," he added.

(Do not be reckless. Consider two things: First, they will really kill you because you're their enemies. Second, they want your gunds. Now, you have cellphones. If you are in a place, in the house, or attending parties like that, be careful because they're on trail.) (SunStar Philippines)