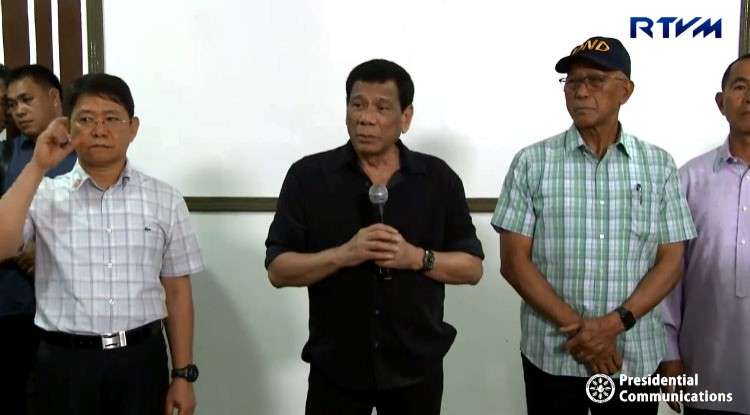 BOHOL. President Rodrigo Duterte talks with former rebels and Militia ng Bayan members who are now beneficiaries of the Enhanced Comprehensive Local Integration Program in a meeting at Camp Rajah Sikatuna in Carmen, Bohol on November 27, 2018. (Screenshot from RTVM)

PRESIDENT Rodrigo Duterte called Tuesday, November 27, for a "careful" processing of deportation of illegal Chinese workers in the Philippines.

He said the government needs to be circumspect in deporting the Chinese nationals illegally working in the country, raising worry that illegal Filipino workers overseas may also suffer the same fate.

"It's not okay. It's not okay but there has to be an arrangement there," he said in an interview in Panglao, Bohol.

"They should be deported, but in the same manner, you should be careful because when you point to the Chinese, you also point [at] yourself, at us. There are so many thousands of Filipinos working there or went inside China as tourists and working there," he added.

The President's statement came after the Senate began Monday, November 26, its investigation on the influx of illegal foreign workers in the Philippines, specifically Chinese nationals.

Senate labor panel chairperson Joel Villanueva noted that about 51,000 of 115,652 alien employment permits have been granted to Chinese nationals from 2015 to 2017, based on the data from the Department of Labor and Employment.

Duterte said it would be more appropriate to just tell the illegal Chinese workers in the country to "go home."

He worried that illegal Filipino workers in China may also experience a hostile approach, if his administration is not careful about handling the issue of alleged illegal employment of Chinese nationals in the Philippines.

"Remember, it's not just exploiting a story about the Chinese working there. We are doing the same thing. In Malaysia, there are a lot of our women there, in Indonesia, in China, in Korea," Duterte said.

"If you think you are at a loss, at a disadvantage because there are so many Chinese nationals working here, remember that we have the same equal amount of people -- Filipinos who are there working in China. But wala naman silang idineport (the Chinese government did not deport any of our fellow countrymen). So maybe, you can just tell them to go home," he added. (SunStar Philippines)