New King of the Road: Even with BRT, motorbikes still needed in Cebu City (Part 3) 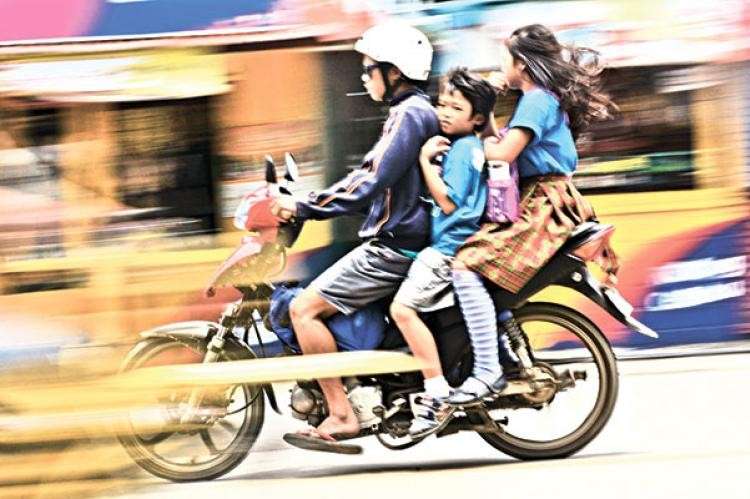 SunStar Philippines, the digital unit of the SunStar network of community newspapers, looks into the habal-habal (motorcycle taxi) phenomenon as this ubiquitous two-wheeler invades the highly congested urban areas. This is the last of three parts of a multimedia report on the new "king of the road" that was originally published on April 3, 2017.

READ: Motorcycles on the rise (Part 2)

Villarete, who currently serves as a city administrator of Cebu City, said the Cebu City Government is determined to complete the bus rapid transit (BRT) system project, "which is not only environmentally sustainable, but also promotes inclusive mobility."

The Cebu City BRT, a P10.6-billion mass transport project financed by the World Bank, among others, is a 16-kilometer route from Bulacan in the south to Talamban in the north. It will have a total of 33 stations and 76 bi-articulated buses.

The system is targeted to be operational by 2019 and is expected to serve about 330,000 passengers.

As of March, Villarete said the project was in the road-right-of-way acquisition phase and the funds were being transferred to the Cebu City Government from the Department of Transportation.

Even if the BRT becomes operational in Cebu City, Villarete said there would still be a need for the motorcycle taxi and other two-wheelers to provide the first mile/last mile connectivity service, especially in the mountain barangays. About a fourth of the city's 80 barangays are in the uplands.

"Even if the BRT is very flexible, it cannot be door-to-door, so you need this (motorcycle taxi) to provide the first mile/last mile connection going to (and from) the villages," he said.

First mile/last mile refers to the first and final legs of passenger travel.

The first mile/last mile solution is the motorcycle taxi ride between his home and the highway.

Motorcycle taxis and other two-wheelers, Villarete said, are in most cases the only option for rural to urban connectivity.

In terms of transport economics, he said two-wheelers are "a highly-equitable mode, especially in a developing country like the Philippines, providing door-to-door mobility for a greater number of our residents who cannot afford to buy cars, in spite of the challenges of hot weather or monsoons."

"In Vietnam's experience, you can bring the two-wheeler from your bedroom to your office," he said.

BUS RAPID TRANSIT. Government is acquiring the road right-of-way for a bus rapid transit (BRT) system that is targeted to start serving around 330,000 commuters by 2019. (SunStar File photo)

But in the context of sustainable transport, Villarete said there is a need to study whether two-wheelers should be promoteed as a mode of transport.

At the 10th Regional Environmentally Sustainable Transport (EST) Forum in Asia in Vientiane, Lao PDR two weeks ago, Villarete said his group of transport planning experts pushed for such a study.

Firstly, emissions spewed by motorcycles contribute to urban air pollution. Villarete said there is a need to look at the emission levels of motorcycles compared to that of other vehicles.

Another group of experts at the EST Forum cited existing studies showing that motorcycles have emission levels that are "quite high." The group pushed for electric two-wheelers as alternative.

This leads to the second issue -- should electric two-wheelers be promoted for sustainable transport?

Villarete note that electric two-wheelers are gaining popularity in other countries and have become affordable. They might also prove to be viable as motorcycle taxis. But this needs to be studied.

And finally, what is the lead contamination cycle for motorcycles? How are the lead batteries, which are toxic, discarded?

Will Cebu City lead the way?


LEFT unregulated, the habal-habal or motorcycle taxi poses safety and security hazards to the commuting public.

Cebu City Councilor Pastor "Jun" Alcover Jr. noted that many habal-habal drivers are unlicensed, a lot of motorcycles are unregistered, and overloading is rampant in the mountain villages.

Worse, some drivers are allegedly involved in the illegal drug trade and other criminal activities. The habal-habal, because it is illegal, has also become a source of corruption for some enterprising enforcers.

"If this is allowed to continue, this will become another social problem," Alcover said.

Ariel Inton, founding president of the Lawyers for Commuters' Safety and Protection, said that government should regulate, if it would not stop, the operation of motorcycle taxis.

"Its number is growing and if this will not be addressed, then it will pose a serious transport problem in the future. The government must choose to stop it or allow it through regulation -- before it becomes too late," he said.

But can government regulate something that is illegal?

To legalize and regulate the motorcycle taxi as a public transport vehicle, Congress would need to amend the Land Transportation Code and the Local Government Code, respectively.

The Land Transportation and Traffic Code prohibits the use of a motorcycle as public transport, while Sections 447 and 458 of the Local Government Code, or Republic Act 7160, regulates only tricycles (motorcycles with passenger sidecar).

Whether these will be passed remains to be seen.

Catanduanes Representative Cesar Sarmiento, who chairs the transportation committee, acknowledged that the lack of an adequate and efficient mass transport system spurred public demand for the motorcycle taxi, both in the countryside and in urban areas.

But he said the committee would rather address the root problem, which is traffic congestion.

Sarmiento also cited the need for first address safety issues with the use of motorcycle taxis.

"The priority of the committee now is to facilitate the enactment of House Bill 4334, or the Traffic Crisis Act of 2017," Sarmiento said in an email.

"We believe that the Traffic Crisis Bill will be a comprehensive and urgent response to the congestion problem in our metropolitan," he added.

Among the solutions listed in the bill is the rationalization of routes so that the appropriate type and number of mass transport vehicles can cater to the demand in each route.

The safety issue was partially addressed with the passage during the 16th Congress of Republic Act 10666, which prohibits small children from riding on a motorcycle except during medical emergencies.

Allowed to ride on the motorcycles are children whose feet can "comfortably reach" the foot peg and whose arms can reach around the waist of the driver/rider.

In the absences of a national law, an ordinance regulating the motorcycle taxi would likely be questioned in court. But regulatory measures would at least be in place while the legal process plays out, he added.

"What's important is that somebody regulates (the motorcycle taxi). Let's not be too legalistic about it. Hanggang kailan tayo maghihintay (until when should we wait)? Accidents are happening," Inton, a long time majority floor leader of the Quezon City Council in Metro Manila, said in a phone interview.

In Cebu City, the Office of the Mayor has started listing organized motorcycle taxi drivers under the Cebu City and Mountain Barangays Habal-Habal Drivers Association (Cemobahada). Members are given Cemobahada stickers that also contain the Type O sign of Mayor Tomas Osmena.

Alcover, who is allied with the opposition party, is proposing an ordinance granting the City Government the power and authority to issue franchises to motorcycle taxi operators.

If approved, this would be a landmark regulation for the motorcycle taxi.

Inton lauded the proposal, saying it's "a move to the right direction."

Ahmed Cuizon, Central Visayas director of the Land Transportation Franchising and Regulatory Board (LTFRB), said this would be a test case.

"If the local government starts issuing franchises for the habal-habal (motorcycle taxi), somebody might contest it," he said.

Alcover is hopeful that his proposed ordinance would be approved within this year.

"I think there's a great chance (of approval). I'm very happy that I'm receiving positive response from councilors who have crossed party lines," he said.

Eight of the 18 members of Cebu City's legislative department are allied with the administration, while Alcover, Vice Mayor Edgardo Labella and seven other councilors are with the opposition. One councilor is independent.

Alcover was scheduled to submit a revised proposal to the Cebu City Council last week.

His original proposal, submitted in September last year, sought to legalize the habal-habal. It was rejected by the committee on laws, which cited the absence of a national law. Alcover also failed to get the support of the Land Transportation Office (LTO) and the Department of Transportation (DOTr).

The revised proposal shifts to regulation and renames the habal-habal to the "more respectable" term motorcycle taxi.

Alcover cited the Revised Administrative Code and a Supreme Court ruling to point out that an LGU can regulate the motorcycle taxi.

Section 2238, also known as the general welfare clause, of the Revised Administrative Code stated that the power of the municipal corporation to enact such ordinance as shall seem necessary and proper to provide for the health and safety, promote the prosperity, improve the morals, peace, good order, comfort and convenience of the municipality and its inhabitants thereof, and for protection of property therein.

In its decision in GR No. 131512 on January 20, 2000 (LTO vs City of Butuan), the Supreme Court upheld the devolution of tricycle registration to LGUs.

Alcover's proposal will be reviewed by the committee on laws, which is expected to call for another public hearing.

"If approved, this will complement the initiatives of Mayor Osmena to organize and professionalize the motorcycle taxi drivers," Alcover said. (SunStar Philippines)
< Previous PageNext Page >