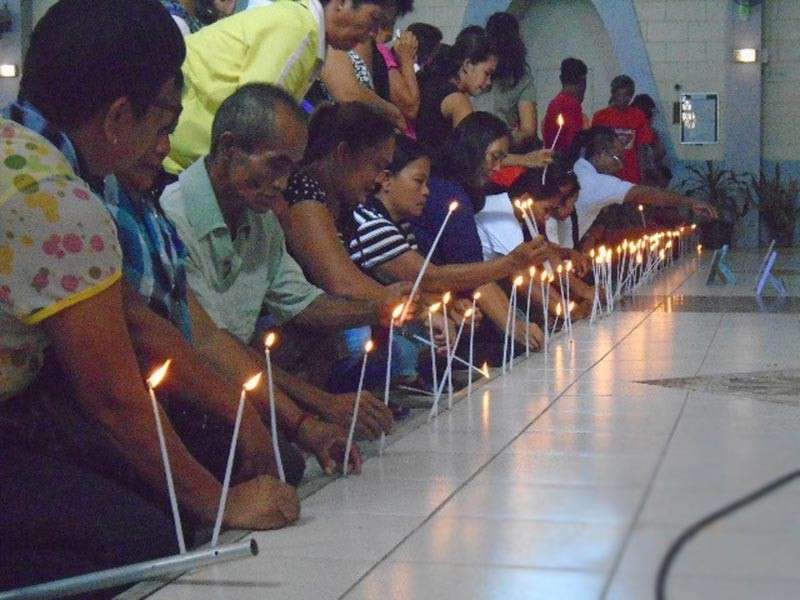 BACOLOD. The families and members of human rights advocate and progressive groups mark the 40th day of nine farm workers who were massacred in Sagay City in October. (Contributed photo)

FAMILIES and members of human rights advocate and progressive groups led the ecumenical service in Escalante City, Negros Occidental on November 28 to mark the 40th day of nine farmers who were massacred in Sagay City in October.

The Northern Negros Alliance of Human Rights Advocates (NNAHRA), Karapatan-Negros, Bagong Alyansang Makabayan (Bayan)-Negros, Mothers and Relatives against Tyranny (Martyr), and the Iglesia Filipina Independiente (IFI) offered a mass and tribute to the famers at the Mt. Carmel Church.

They also held a candle lighting ceremony, which was attended by some members of the National Federation of Sugar Workers (NFSW).

The same services were also held in Bacolod City and Quiapo, Manila on Thursday, November 29.

The groups expressed its solidarity in the people’s call for justice for the victims of the Sagay massacre.

“There is a need to echo the call for justice for Sagay massacre victims, especially now that their colleagues and supporters have come under brutal attack by the state,” NNAHRA secretary-general Rey Alburo said in a press statement.

On October 20, Eglicerio Villegas, 36, and his common-law wife Angelipe Arsenal, 47; Paterno Baron, 48; Rene Laurencio, 53; Marcelina Dumaguit, 56; Rommel Bantigue; Morena Mendoza; Jomarie Ughayon Jr., 16; and Marchtel Sumicad, 17, were resting in a makeshift tent at Hacienda Nene in Bulanon Village when about 12 unidentified armed men fired at them using a high-powered firearms. Three of them were partially burned.

Barely a week after the incident, the Negros Occidental Police Provincial Office filed multiple murder charges against two alleged recruiters who were identified as Rene Manlangit and Rogelio Arquillo, and seven John Does who were behind the killing.

Manlangit and Arquillo were tagged behind the killing after they allegedly recruited the victims to be members of the NFSW, which the state forces considered a legal front of the New People's Army.

Both suspects denied the allegations against them in earlier media interviews.

After the filing of the case, the National Democratic Front (NDF) tagged four members of the Revolutionary Proletarian Army as the perpetrators of the brutal killing.

The four former rebels denied their involvement in the crime. They said the goal of the NDF for dragging them in the killings was just to locate and kill them, as they cited previous threats they received through text messages.

State forces and progressive groups issued contradicting statement regarding the custody of a minor, who survived the massacre and was considered to be the primary witness in the incident.

This also prompted the police to file kidnapping charges against a member of a National Union of Peoples' Lawyers (NUPL) after the father of the minor sought their assistance to get the custody of his son.

The minor is now under the custody of his mother through the assistance of Karapatan-Negros and NUPL.

The father believed that his estranged wife was only being used by progressive groups to get the custody of his child but the NUPL dismissed the reports. They claimed they are only protecting the child.

Progressive groups continue to claim that paramilitary elements under the command of the Armed Forces of the Philippines, the Philippine National Police, and local landlords are the main suspects in the brutal killing of farm workers in Sagay City.

Alburo said the family endures continuous harassment from state forces for their refusal to go along with the police and military’s “official storyline,” whitewash, and cover-up of the massacre.

Meanwhile, various sectors will march to Bacolod City during the International Human Rights Day on December 10 to call for justice for all the victims of extrajudicial killings in Negros Island.